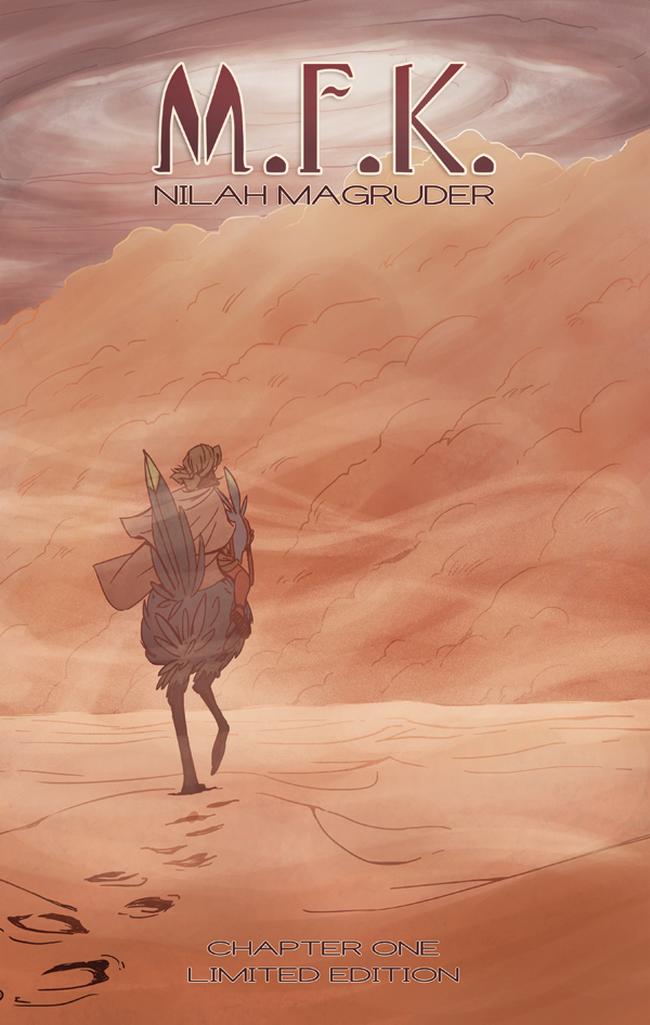 “Nilah Magruder’s M.F.K. is a great read,” said Matt Wayne, the Director of the Dwayne McDuffie Award for Diversity. “Nilah created an incredibly engaging post-apocalyptic fantasy world peopled with a broad array of characters. In terms of both excellence and inclusiveness, this is just the sort of comic the Award was created for.”

The Award is named after Dwayne McDuffie, the influential comics and animation writer who passed away in 2011 and who was known for creating superhero properties for Marvel and DC comics that included diverse casts of characters.

The Award was presented to Magruder by Charlotte McDuffie, Dwayne McDuffie’s widow. The keynote address was given by writer-director-producer Reginald Hudlin.

“This award isn’t about honoring Dwayne,” Wayne said. “Dwayne wouldn’t have stood for that. The Selection Committee had to choose between five worthy nominees, and those works and their creators are what we celebrate today.”

ABOUT THE CREATOR OF M.F.K.:
Nilah Magruder is a storyboard and concept artist artist in Los Angeles. Born and raised in Maryland, from a young age she developed an eternal love for three things: nature, books, and animation. Naturally, all of her school notebooks were full of doodles of animals and cartoon characters.

Nilah received a B.A. in communication arts from Hood College and B.F.A. in computer animation from Ringling College of Art and Design. She has illustrated for comics, children’s books, film and commercial television. Interested in exploring diversity in storytelling, she launched the action-adventure webcomic M.F.K. She believes that everyone should have characters with whom they can relate in their chosen entertainment, be it comic book, novel, film, TV, or video game.

Dwayne McDuffie is best known as the co-founder and creator of Milestone Media. He was a Story Editor on the KIDS WB’s Emmy Award-winning animated series STATIC SHOCK, which he co-created. He was also a Producer and Story Editor on Cartoon Network’s JUSTICE LEAGUE. He was Editor-In-Chief of Milestone Media’s award-winning line of comic books, managing an editorial operation which boasted the best on-time delivery record in the industry for nearly four years running and has also worked as an editor for Marvel Comics and Harvey Entertainment. As a writer, Dwayne created or co-created more than a dozen series, including DAMAGE CONTROL, DEATHLOK II, ICON, STATIC, XOMBI, THE ROAD TO HELL and HARDWARE. He wrote stories for dozens of other comics, including, SPIDER-MAN, BATMAN: LEGENDS OF THE DARK KNIGHT, THE TICK, CAPTAIN MARVEL, AVENGERS SPOTLIGHT, BACK TO THE FUTURE, HELLRAISER, ULTRAMAN, (The Artist Formerly Known As) PRINCE and X-O MANOWAR.

Dwayne won the 2003 HUMANITAS PRIZE for “Jimmy,” a STATIC SHOCK script about gun violence in schools. He was nominated for two EMMY AWARDS for the TV series STATIC SHOCK, a WRITERS GUILD AWARD for the TV series JUSTICE LEAGUE and three EISNER AWARDS for his work in comic books. His comic book work won eleven PARENTS’ CHOICE AWARDS, six “Best Editor” awards, and a GOLDEN APPLE AWARD for his “use of popular art to promote and enhance human dignity.”

Dwayne was born and raised in Detroit, Michigan and attended The Roeper School. Before entering comics, he studied in undergraduate and graduate programs at The University of Michigan, then attended film school at New York University’s Tisch School of the Arts. He also co-hosted a radio comedy program, while moonlighting pseudonymously as a freelance writer for stand-up comedians and late-night television comedy programs. He wrote scripts for an animated feature, episodes of BEN 10: ALIEN FORCE, STATIC SHOCK!, JUSTICE LEAGUE, WHAT’S NEW, SCOOBY-DOO? and TEEN TITANS.