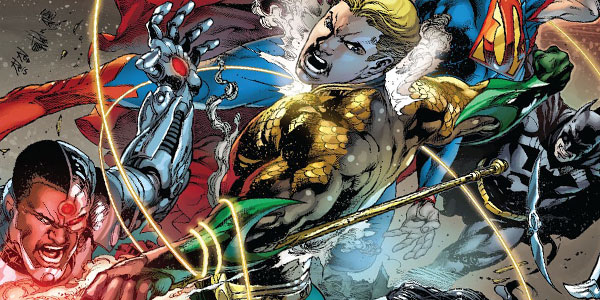 January saw DC losing market share to Marvel again, no surprise really given that we are in the midst of the Marvel NOW! release of new titles. Curiously enough, however, there are still some salient facts that reflect the staying power of DC’s NEW 52 promotion, despite recent naysayers in the publishing industry. Individual titles at the bottom of DC’s barrel (as we shall see) are indeed facing a tough climate, but the line as a whole is holding up remarkably well in comparison to the January prior to their relaunch.

For instance, January 2011 saw a market and dollar share split of roughly $25 Million as follows:

Fast forward to January 2013, and the splits are much closer in a $41 Million month, even amid a huge push from competitor Marvel Comics with issue #1’s, 2’s and 3’s standing up against DC’s potentially softer #16’s.

What this tells me (other than that DC has increased its dollar share of a much bigger market by 5% in two years, a feat any company in the publishing industry would be proud of) is we might be seeing an evenly matched DC and Marvel when full line product launches settle down come May. 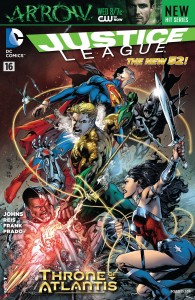 The last few months have seen steady growth for this title amid the “Throne of Atlantis” crossover, making it one of the few books to have a consistent uptick on the charts. Even Batman, amid the wildly successful Death of the Family crossover, has only spiked and not maintained growing sales with each issue. Upward trends for more than a single month (usually tied to an anniversary issue or new creative team) are nearly unheard of if you look at sales charts closely, as every book is subject to the laws of attrition.

This bears watching, but one thing is for certain: it validates DC’s desire to dedicate its February launches to a Justice League of America wave, headlined by another title written by Justice League scribe Geoff Johns. 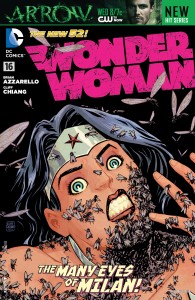 The ladies stick together.

So, this is a curious phenomenon:

Aside from Batgirl (which is currently benefiting from a Death of the Family tie-in) and Birds of Prey (soon to be receiving a new creative team), the bulk of DC’s female led titles are nestled in quite comfortably at the 30-40K unit mark, sharing space with Marvel hits such as Daredevil and Hawkeye, but far eclipsing Marvel female led titles by over 10K units. Is this merely a function of long-term strategy paying off (my guess), or something else?

Nothing really outlandish or controversial here, but I thought it was an interesting pattern worth noting. 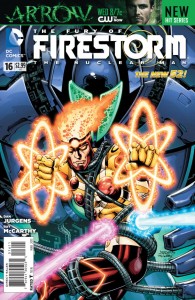 As you may recall, last month I predicted the demise of four of these six books. Mind you, it didn’t take a clairvoyant given these numbers. Two of them are being cancelled with numbers on only their fifth issues (both had launches in DC’s Zero Month), although savvy readers may remember that’s when the initial New 52 cancellations of O.M.A.C. and Static Shock were announced as well.

Joining the other two New 52 titles cancelled last month (I, Vampire and DC Universe Presents), this sets DC Comics up for a two month, eight title launch, which alarms many internet commenters and has been cited as an indication of the failure of the line as a whole. I could remind those fearful that Marvel NOW! is essentially an “eight title launch per every two month” endeavor, but, to be fair, DC doesn’t have another Batman or Justice League (well, maybe) to put out there as Marvel did with its core titles. The real concern is whether DC can replace these six failed titles with anything better (or at least commercially lucrative) than they have already. Signs are beginning to point to yes, but results are still hazy. It comes down to two things, in my opinion: creators and spin-off potential.

DC has already announced three of the eight replacement books, and all three trade on creator popularity: an Untitled Superman project by Scott Snyder and Jim Lee, The Movement by Gail Simone, and The Green Team by Superman Family Adventures scribes Art Baltazar and Franco. Looking at this month’s launches of a wave of characters spun out of their sure-fire hit Justice League of America, and the stability found in their newest mid-range seller Talon (a Batman spin-off which succeeded in stabilizing despite featuring a completely new character and without having to have Batman actually appear), my guess is we’ll be seeing a share of safe choices coming up. A Shazam! title building off the soon-to-be completed back-up story in Justice League, and a long overdue Robin/Red Robin title.

Despite these predictions, I do hope DC continues to take risks on new ideas (even if some haven’t paid off), but ensures that they enlist the highest quality of creators to make those ideas pay off. That’s the real trick behind elevating the lower end of their line, which does indeed spell trouble if a higher percentage of replacement books don’t start making sales improvements for them. Doing a Marvel NOW! style push once a year is one thing. Attempting it once a quarter is another.