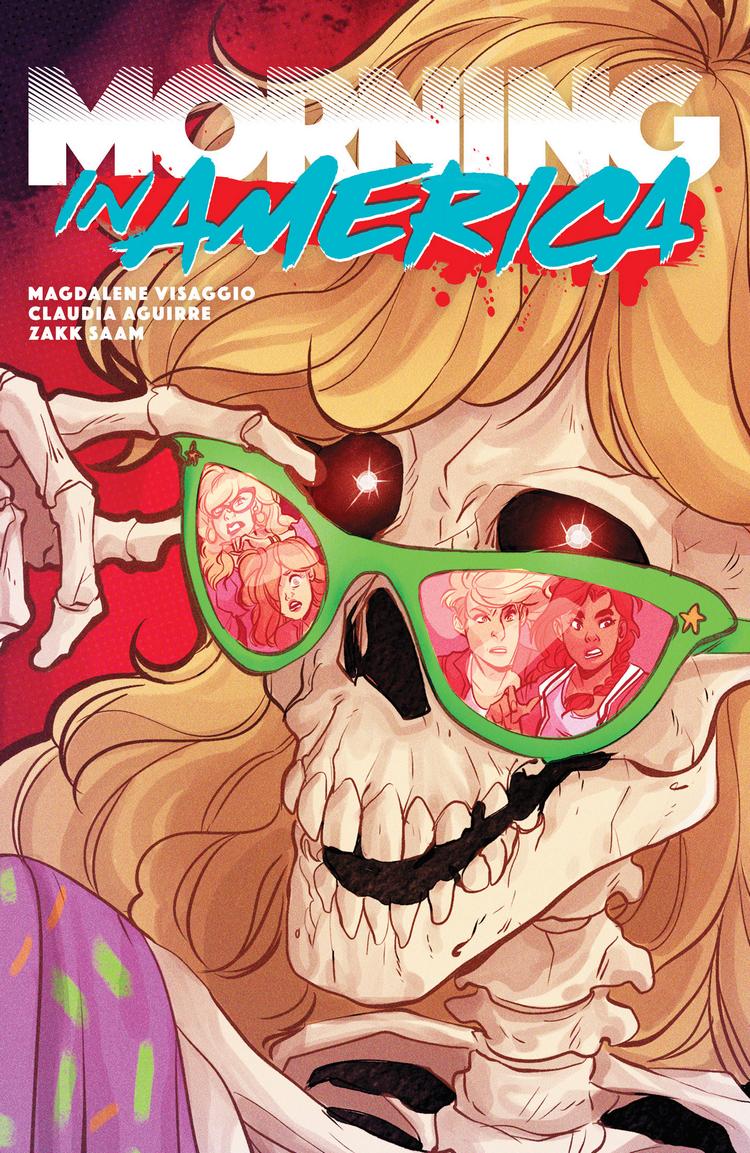 PORTLAND, OR., Jan. 29, 2019 — Sharpen your pencils and grab your notebooks, the Oni Press Fall 2019 lineup is here! We are proud to announceWait, What?: A Comic Book Guide to Relationships, Bodies, and Growing Up by Heather Corinna and Isabella Rotman (Limerence Press); Kriss: The Gift of Wrath by Ted Naifeh and Warren Wucinich; Morning in America by Magdalene Visaggio and Claudia Aguirre; and Unplugged & Unpopular by Mat Heagerty, Tintin Pantoja and Mike Amante. These awesome original graphic novels will begin release in September 2019, and fit perfectly in any good reader’s backpack! 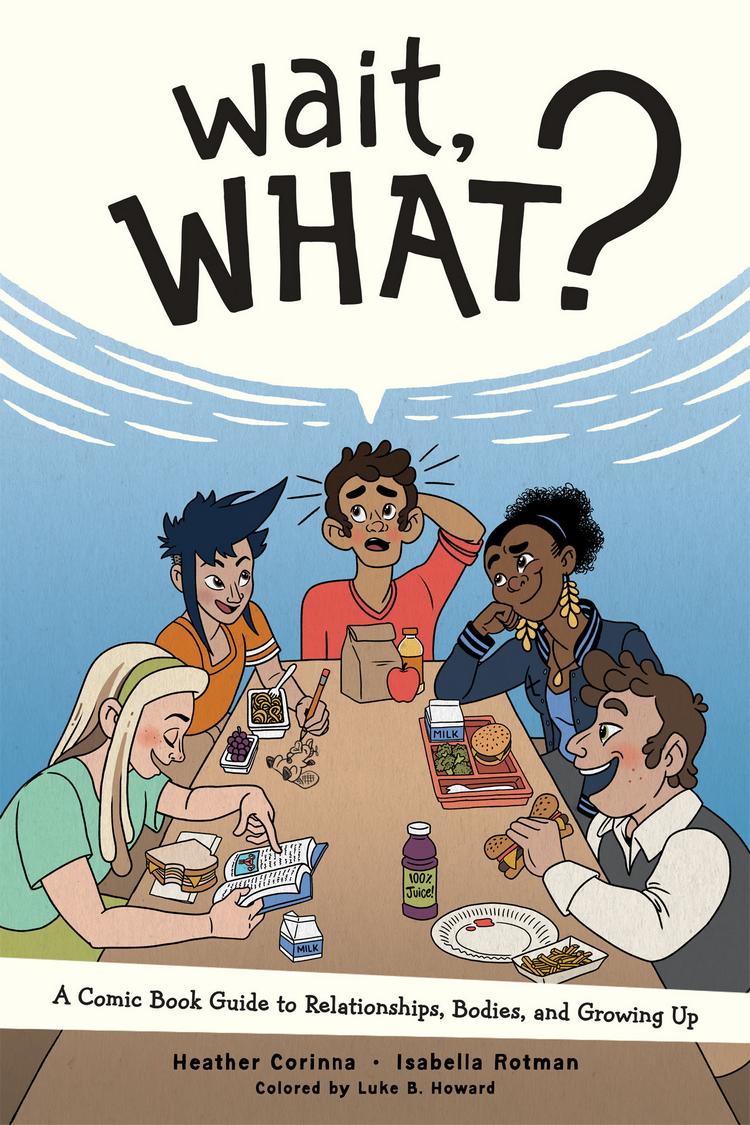 Wait, What?: A Comic Book Guide to Relationships, Bodies, and Growing Up by Heather Corinna and Isabella Rotman; colored by Luke Howard (Sept. 3rd, Middle Reader)

This Limerence Press title from Scarleteen founder Heather Corinna and sex educator Isabella Rotman is a fun and inclusive comic guide that covers essential topics for preteens and young teens about their changing bodies and feelings.The perfect complement to any school curriculum.

“I’ve always done the work I have with full faith and confidence that children and adolescents have the ability to handle challenging parts of life like puberty, their developing sexuality and the development of elective relationships, so long as they’re given good support and sound information that really speaks to them,” said Heather Corinna. “I’m so glad that we were able to make Wait, What? with this core belief in mind. I love how it so clearly shows the ways readers this age can capably learn complex or nuanced things, can teach and help each other with the knowledge they have, can work together to correct or expand what they know (and can do so with great geeky joy and kindness), and can handle these issues well with the right support.”

“I’m honored to be working on Wait,What? because of its uniqueness as a sexuality and relationships book for young teens which centers the reader’s comfort in their own body, sexuality, and emotions as a primary focus,” said Isabella Rotman. “I think comics present a unique opportunity as an educational tool, especially around topics that can be awkward or hard to talk about. There’s something so genuinely non-pretentious about comics that puts most people in a space to learn or have a conversation. We can see these characters really care about each other and themselves, and I hope their feelings and friendships will encourage young readers to love themselves as well. I remember the middle school version of myself version of myself and think, “What did she want? What did she need to hear?” 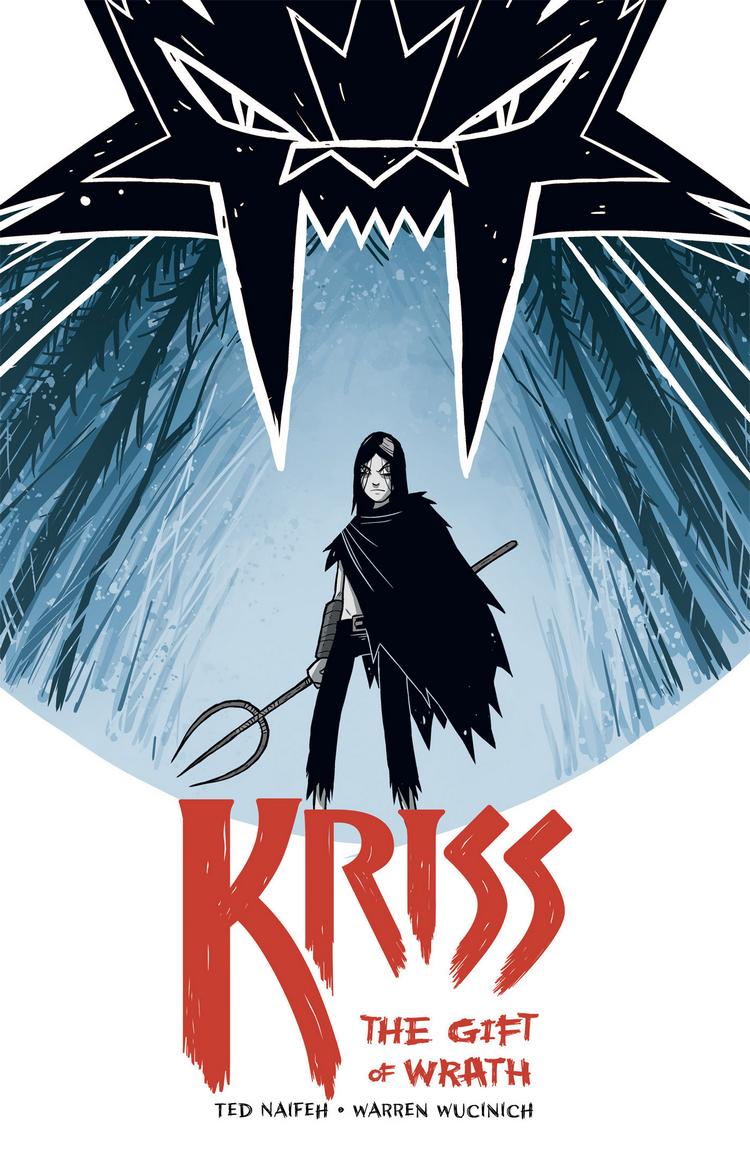 For fans of The Graveyard Book and Through the Woods comes a different kind of YA fantasy graphic novel, in which a teen boy’s search for his destiny leads him into darkness.

Lean, ghostly pale, and permanently grim-faced, Kriss has always been an outsider in his small village. Not even his adoptive parents love him. Only Anja, the blacksmith’s daughter, brings kindness and friendship into the life of the sullen teenager. But Kriss is haunted by dim memories of his true father, Erikk Iron Tooth, the king of Darkovia.

When Anja’s mother is killed by a wild sabercat from the far north, the young girl’s world is shattered, and Kriss determines to avenge her. Armed with only a pitchfork, the skinny teen sets out to kill the beast, only to learn that it’s actually a dark spirit from Darkovia, come to bring him his destiny. The spirit grants Kriss the power to vanquish the mightiest foes, and commands him to reclaim his father’s kingdom. But his gift of power comes with a price, uncontrollable rage. And leaving the village would mean leaving Anja, the only person who’s always been there for him. Kriss must choose between his destiny and Anja, who needs his friendship more than ever. But his growing power, and the fiery anger that comes with it, threatens to make the choice for him, and burn everything he holds dear.

“Everyone always asks why I only write female characters. I never had a good answer, so I thought I’d try writing a male protagonist,” said Ted Naifeh. “Warren did a magnificent job coloring Courtney Crumrin and Princess Ugg, so I’m delighted to see him take the wheel and design a whole story world.”

“Ted has a wonderful knack for turning tropes on their heads and I feel privileged working with him in bringing this new tale to readers,” said Warren Wucinich. “Stories like Kriss are exactly the kind of stories I got into comics to tell.”

Created by powerhouse team Magdalene Visaggio (Eternity Girl) and Claudia Aguirre (Kim & Kim), Morning in America follows the Sick Sisters, a group of friends and small-time delinquents who may be the only people standing between their suffocatingly small town and complete apocalyptic destruction. The Sisters know there’s something wrong in Tucker, Ohio—and they also know that the authorities aren’t doing anything about it. When the girls take the investigation into their own hands, they run into wild conspiracy theories, abandoned homes… and something that screeches in the night. At the end of the world, four girls with bikes and baseball bats are there to stand in the way.

“The way the eighties have come to dominate pop culture really fascinates me. I was born in ’84—a year after Morning in America—so I largely missed the decade,” said Magdalene Visaggio. “While a lot of people are coming at this stuff right now from the perspective of nostalgia, this book is looking into the era from the outside. So many of the pop culture touchstones of my youth have their genesis there, and it’s an era that has always felt mysterious, like a buried civilization. So, for me, something like Morning in America isn’t delivering something comfortable and familiar; it’s exploring a half-remembered world whose influence is omnipresent.”

“There’s so much fun in reminiscing the 80s,” said Claudia Aguirre. “I guess most of my memories come from watching my parents and older cousins ramble about things they loved, watching movies with them, and my aunt haphazardly hoarding cans of soup. (“To get ready for the end of the world!” she’d laugh.) It is with this oddly cheerful energy that Mags and I tackle this story, and how we give you luxury seats to the End of the World.” 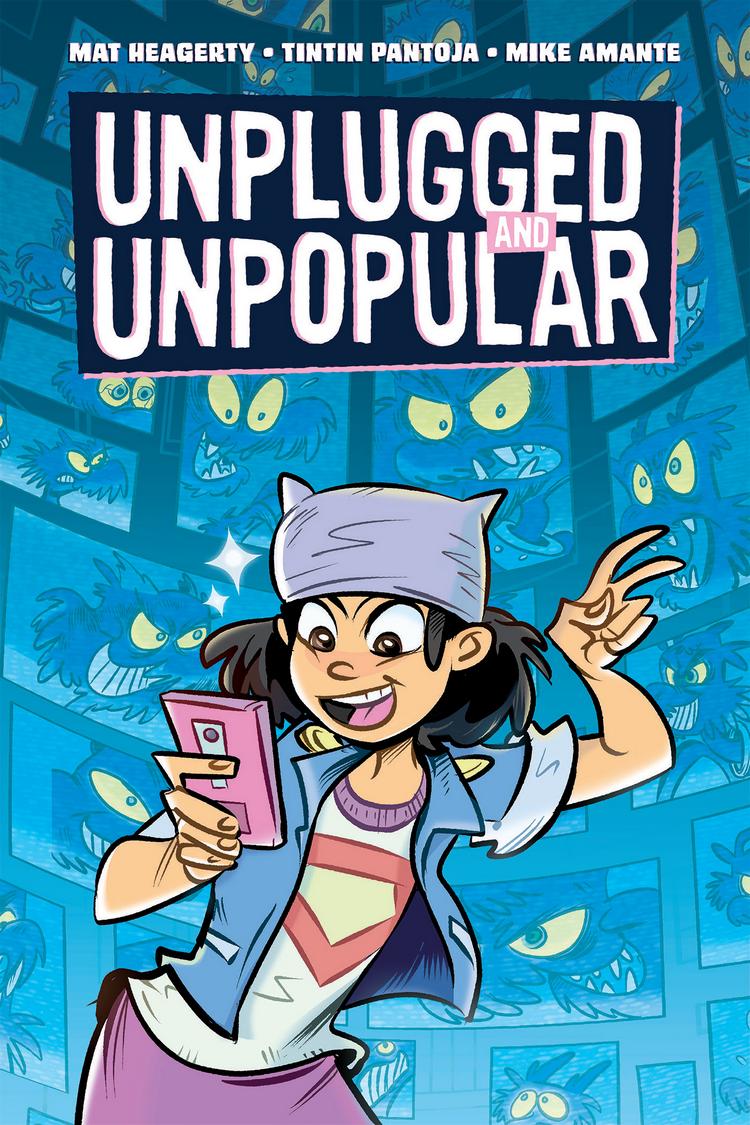 After Erin Song’s parents ban her from using her phone, TV, Internet and all her screens, she soon discovers mysterious, strange creatures and must foil their plot to take over Earth in this hilarious sci-fi graphic novel for tweens.

Erin Song lives in a digital world. Everyone has a phone, a tablet, a computer—more screens than you can count. Even with a world of information at her fingertips, Erin can’t figure out the secret to popularity at her clique-y junior high school. So when uber-popular Wendy asks for help on a test, Erin jumps at the opportunity. This could be her big break! Unfortunately, she gets caught, and her parents ban her from all her devices. Suddenly, Erin Song is the only girl in the world who’s not allowed to look at a screen.

And that’s when Erin notices something funny: small, furry aliens making humans disappear with a weird device Erin’s never seen before. No one else notices them, though—except Erin’s grandmother and two old men who run the local library. They’ve discovered that the aliens are using screens to control the human race, tricking them into thinking they aren’t really there—and that anyone who’s been abducted never existed.

Now it’s up to Erin and her grandmother to save the day! But without technology on their side, do they stand a chance?

“I think a lot of young folks today believe there is no social life without social media,” said Mat Heagerty. “In Unplugged & Unpopular Erin learns that’s untrue, and that there’s a whole lot of adventure to be had beyond the glowing screens.”

“I loved working on Unplugged & Unpopular,” said Tintin Pantoja. “It’s a fun romp about our current obsession with digital devices. The story really got me to let loose on the characters, and of course, the action sequences. It’s got just enough snark and satire to spice up the adventure, and of course, feisty seniors—you don’t get that often!”

“I enjoyed working on Unplugged & Unpopular because I got to color Tintin’s dynamic lineart,” said Mike Amante. “The team (Mat, Tintin, and editor Robin Herrera) was really pleasant to work with as well. I’m totally honored that they let me contribute to this wonderful book.”