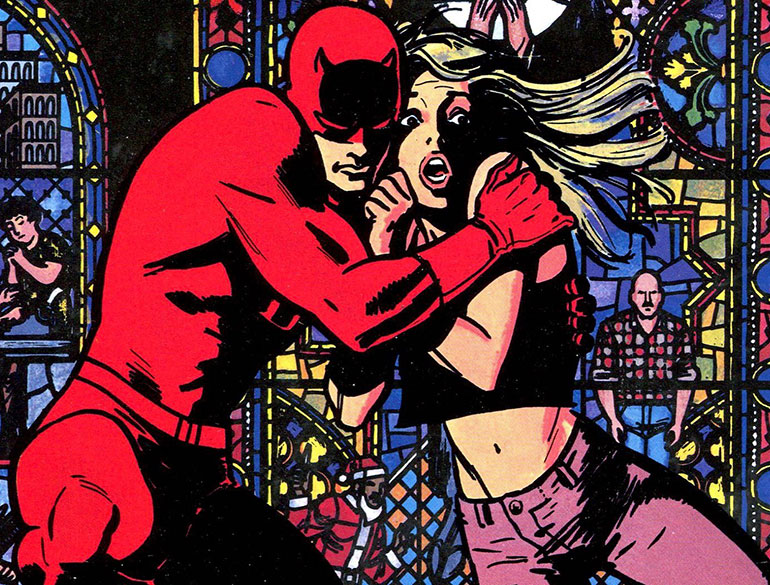 I spent this past Valentine’s Day convincing my girlfriend to break-up with me.

It took some mental and conversational gymnastics with a hearty dose of self-deprecation/ character suicide, but I got her to hit the eject button.

Valentine’s Day wasn’t the greatest backdrop, but our work schedules didn’t match, we wanted different things, she lived in Brooklyn, and she had never heard of Wolverine or Daredevil. We could never be.

So, I bought her flowers, held her close as I fed her sushi, and engineered all of our conversations to highlight the infections brewing in our relationship.

Much to my relief, she made the call to end things before either of us got hurt. We parted with her feeling empowered and unfettered and I was able to fade into the oh-so-perfectly, melancholy, rainy, night. It was very noir; Frank Miller or Ed Brubaker could have a field day with it.

As I brooded on my long drive home from Brooklyn, I found myself comforted by the fact that she and I simply weren’t a love story. We weren’t Clark and Lois, Peter and MJ, Barry and Iris, or even Logan and Jean. We were nothing more than companions, far from partners who highlighted and supported the best parts of each nor could we help each other grow into our best selves — something all of those stories shared. 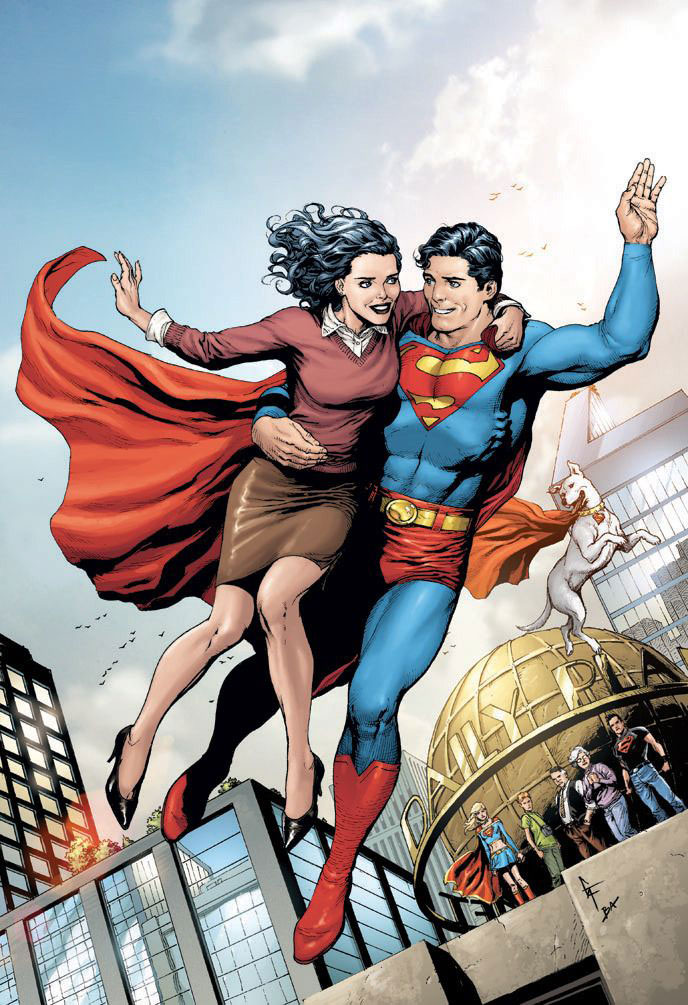 But there was something more essential and foundational missing from our doomed romance, something that those other stories shared that ours didn’t. Something that precluded our story being defined as a love story.

By this point in my drive I had lulled myself into a lonely mediation set to the cadence of the rain, my windshield wipers, and The Smiths. I resigned myself to a forced existential despair, pining the crevices of my psyche for the answer to why I couldn’t just shut up and enjoy the sushi.

Why did I feel the need to trigger a break-up with this woman on Valentine’s Day? And most importantly, what was my actual relationship missing, that all those fictional ones had? Like any mature, well-adjusted twenty-eight year old searching for answers, I went looking for them in comic books.

I first turned to Daredevil, Matthew Murdock, and Karen Page. Murdock’s story revolves around him trying to reconcile his Catholicism with the fact that he has to dress as a devil to protect a place called “Hell’s Kitchen.” Murdock’s faith is tortuously tested in his fight against the malice that breeds within the Kitchen. But Matt’s faith in the tenets of the church is never stronger than when Karen Page is around. 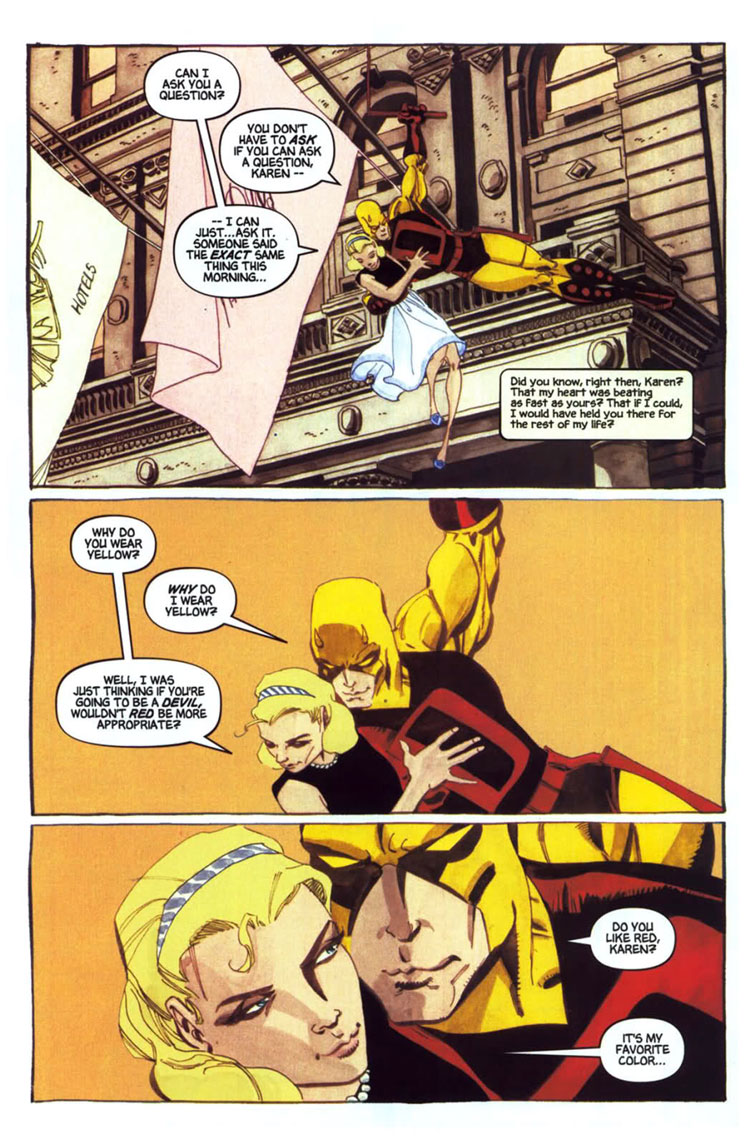 Karen was most often written as the prototypical symbol for innocence that your professor from Lit 101 told you she’d be. She’s blonde haired, naïve, constantly threatened by the world around her, and is proverbial shore Daredevil swims towards. By simply existing, Karen is proof that there is hope and innocence in Hell’s Kitchen that is worth protecting. She proves to him that his struggle isn’t futile if someone like her can have a better life.

As a character, Karen reaffirms his struggle and by proxy is the tether that holds Matt’s psyche together. Every time Murdock comes close to putting his billy club and red pajamas in the closet, tossing away his faith, he remembers her and the others like her that seek salvation in the shadow of the Devil. Through his relationship with Karen, the better angels of Matt’s nature is strengthened.

Both femme fatales are shellacked in red overtones and constantly tempt Murdock. Romanov is constantly trying to seduce Murdock into laying down his arms and to abandon the Kitchen. Elektra is often depicted as the woman who taught Murdock to not only accept his base desires, but to harness their ferocity to live unbound from chains of religion and responsibility. For as much as Karen strengthens Matt’s angels, Elektra and Black Widow embolden his demons and are written as physical counterpoints to Matt’s intangible faith. 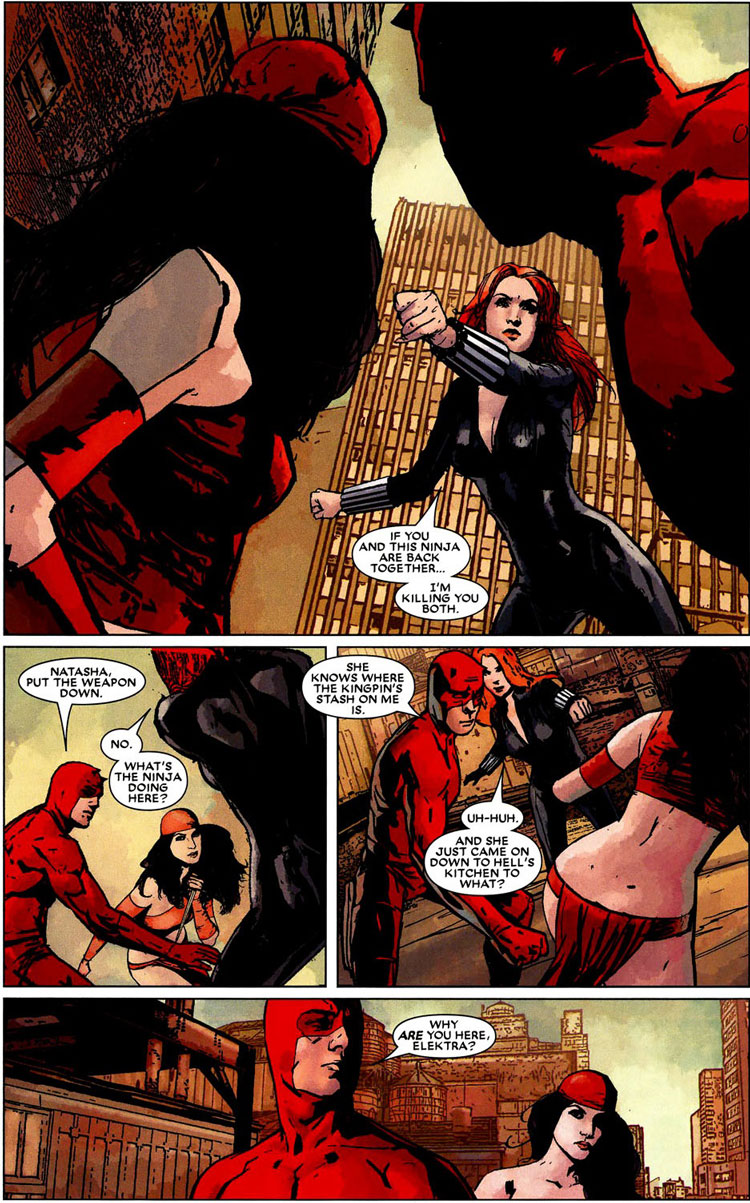 Yet, Matt always chose Karen, because Matt’s character cannot grow from being with either Romanov or Elektra. While their characters compliment Matt’s, they represent the parts of himself that he is fighting against. That is why his relationships with both characters are often depicted as being fruitless and ending in tragedy.

Meanwhile all of Matt’s stories with Karen see him making progressive changes and coming closer to the man he aspires to be. Through Matt’s constant struggle of retaining Karen’s love, he finds the strength to be Daredevil.

Karen and Matt helped me realize that my relationship wasn’t making me a stronger person. I had no motivation to rise above my character deficits, nor did I find a reaffirmation of my personal character quirks and beliefs. We mostly fought, and quite simply, not every love story is going to share this quality.

I then looked to a lesser known couple, Tessa and Mali from We(l)come Back. 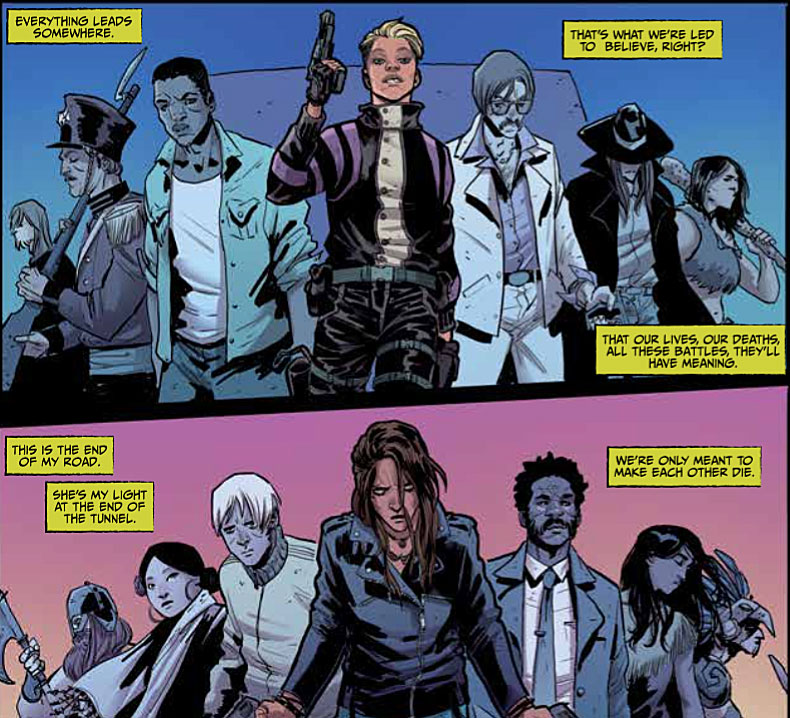 Tessa and Mali are two immortal, continuously reincarnating lovers who are coerced by unseen powers-at-be to kill each other as part of some unseen, undefined war. The characters themselves have long since forgotten why they were fighting, and through their multiple lives and entanglements with the reaper, find themselves entangled with each other.

However, the reaper maintains his undefeated streak in this story. Whenever they are close to escaping their ever vague cycle of violence to the sanctity of their bed, they are plunged to the cold depths of the grave.

Interestingly, the soil that covers their coffins proved fertile and their love was still able to grow.

That love then drives them to rebel against their purpose for being, to fight for each other rather than against one another, and slowly brings them to the realization that their war is pointless. This realization allows them to find an oasis in each other and for a few brief, fleeting moments, their love allows them to live a better life.

Tessa and Mali told me that any romance, even a doomed one, can be productive if it can show you a different way to live. If it can at least provide a brief respite from harsh realities that surround you on a daily basis, the doomed romance can be worth it. Did my relationship take me to a better place? No, it was based in Brooklyn and she made me go ice skating once. It was awful, but that was not what was missing from our relationship, and that’s not the principal tenet of my love story.

Strangely, I did not find my answer from a couple. It wasn’t from star-crossed, hand-holding, food-sharing lovers. It was from someone who actively shuns the idea of love. Someone, who holds the rest of the world well beneath her contempt.

That someone was Violet Paige.

Violet Paige, AKA Mother Panic, is a woman who has been unmade and, as a result, essentially hates everyone. After killing her father in apparent self-defense and her mother being ruled unfit to care for her, she is shipped off to “Gather House,” a boarding school from hell. There, she and her teenaged colleagues are experimented on in effort to advance the supervillain market within the DC Universe.

Violet gets the cybernetic enhancements DLC and is left with super strength, which she promptly uses to burn the whole school down. Her wealth and public infamy allow her to become a punk-rock pariah, as she sets up roots in Gotham City and lets her origin story play out to its logical conclusion. 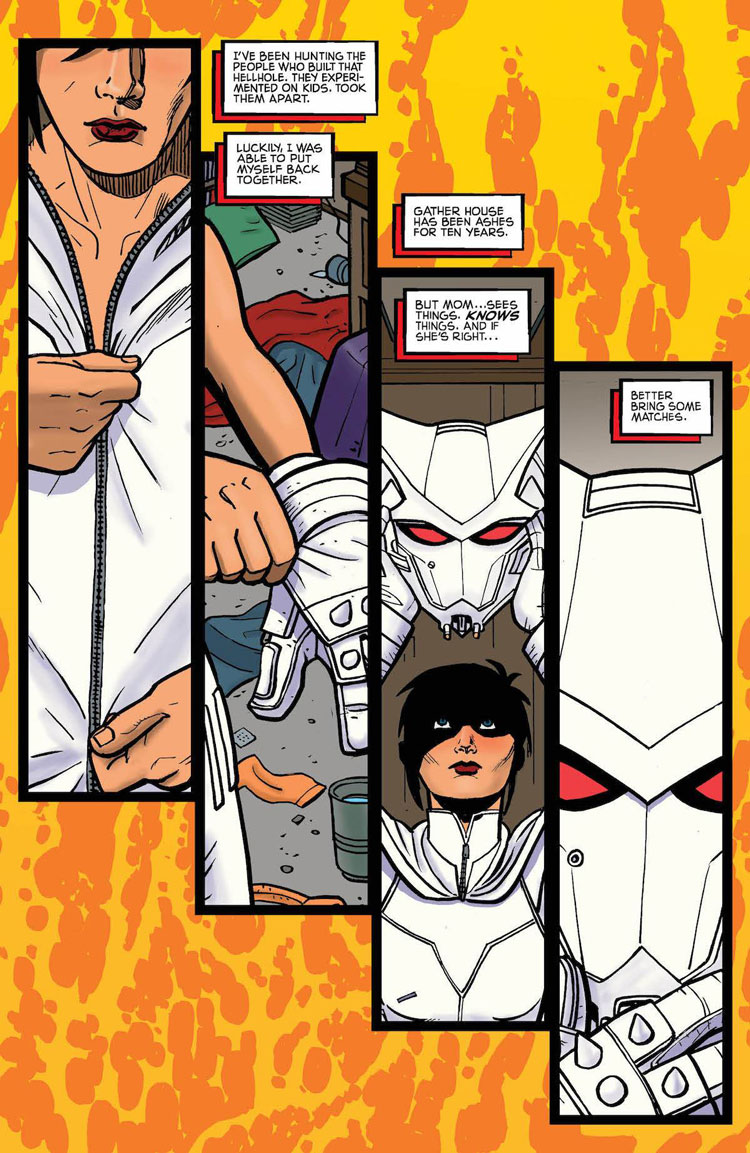 She is far from being a superhero in the traditional sense and is motivated solely by her rage. Relationships, romantic or otherwise, are cruel teases of a life she can never have. And while she is depicted as being active socially and sexually, she does so only to maintain the public image her notoriety demands.

Once an arc, she resentfully drags herself to a party, sleeps with a woman or man who comes into her line of vision, and then pronouncedly dismisses them from her life. For example, instead of ghosting a man she had slept with, she makes a cut on her finger and graffiti’s his wall with her blood to ensure he took the hint.

This person is single and far from wanting to mingle.

Violet’s dismissal of love isn’t meant to highlight a sense of tragic duty, she simply wants to be alone. And by being alone, Violet is able to learn a great deal about herself. She is able to quantify the depths of her rage and to qualify her dissociation from a “normal” social life by the absence of desire for a romantic relationship.

She does not seek a partner to understand or love her. She just wants to watch something burn. Violet learns more about herself from her singular existence than she ever could in the arms of another.

Violet’s story helped me make peace with myself on Valentine’s Day. She helped me realize that sometimes you can learn more from the absence of a partner than you can with a partner. 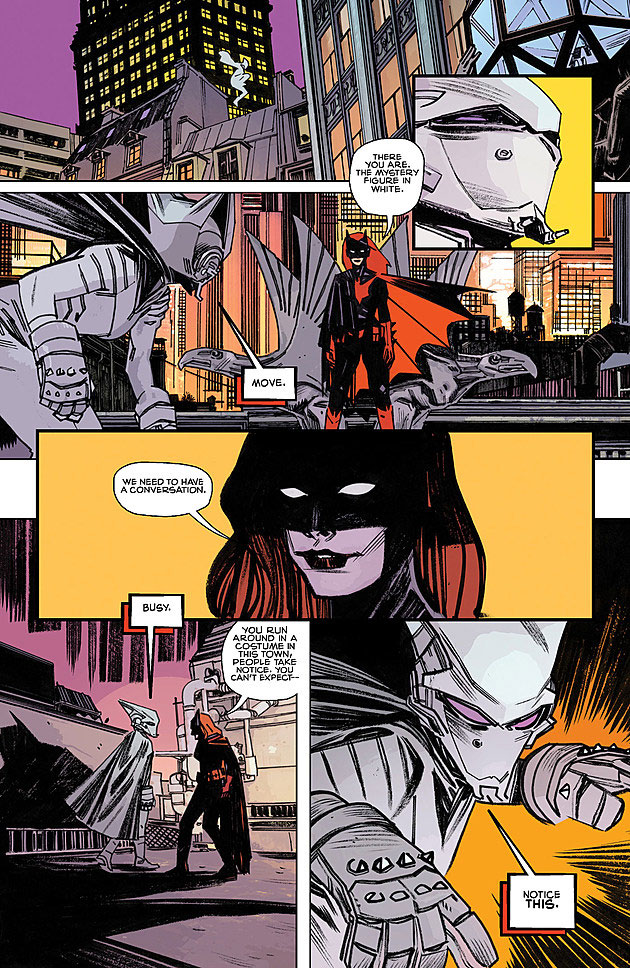 But Mother Panic also taught me that the key to any love story doesn’t involve the right compliment of characters and their traits. It isn’t about the specifics of the plot or premise. Nor is it about the dramatic overtures and self-realizations.

No, the key to any love story is simply change.

The love story plot structure must juxtapose its characters in such a way as to trigger change. This change could entail the character getting stronger or weaker. It could mean new-found self-affirmation, self-acceptance, or self-rejection. Or it could be the simple act of moving out of Brooklyn but the relationship between the characters should be the impetus for change.

The plot details and premise do not matter, no love story is complete without change to all parties involved in the story.

So as I pulled into my apartment complex, I realized I ended our relationship because we didn’t bring change to each other’s stories. We didn’t empower and reaffirm each other the way Matt and Karen did. We didn’t want to fight for each other the way Tessa and Mali did. And our thinking was more in line with Violet’s than that of two people getting sushi on Valentine’s Day.

We weren’t people who could help each other grow.

So, that story ended on Valentine’s Day. But from that awful, rainy, Brooklyn night, I learned how to write a better one.