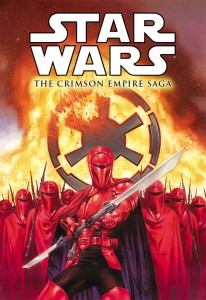 This is the way the Star Wars Expanded Universe is meant to be read.

The Crimson Empire Saga hardcover collects the three volumes of Crimson Empire by Mike Richardson and Paul Gulacy ad proves, once and for all, that a whole can be stronger than the sum of its parts. Crimson Empire tells the tale of Kir Kanos, member of the Emperor’s Royal Guard, and his quest for vengeance against all who have betrayed the Empire. That’s the simplified version of this plot, which is filled with politics, grand space adventures, and Star Wars fun that skirts around the primary series in clever and unique ways. Kanos is a great character. The Star Wars landscape is often filled with characters that are uncertain of allegiances and operate in only shades of grey, but Kanos resides in a world of black and white. His unwavering commitment to his goal is enjoyable to read and while his character is complex, his pure commitment to his task is a great trait not often found in fiction. You know what you are going to get at all times from Kir Kanos, the joy is reading how he accomplishes his crazy feats. As a character who purely seems to exist in these comics, I found it great to know absolutely everything about this character that I could within a single volume. As is often a problem with large universes like Star Wars, to know everything about a single character would require playing multiple video games, reading several books, as well as these comics. A self-contained universe within the grand Star Wars universe was an absolute joy to read.

For a collection this size, Crimson Empire Saga is remarkably cohesive. With a single creative team from start to finish, the collection never deviates from the original tone and maintains a consistent level of quality throughout. Considering the gap of 14 years between the first and third volume in this collection, the level of consistency is an even greater accomplishment. Each story within this collection grows stronger as Kanos’ story grows deeper and his world grows more integrated with the Star Wars universe at large. Richardson has a fantastic handle on what makes these characters that he has developed and I applaud Lucas Books/Dark Horse for leaving Kanos on the shelf until his creators could reunite to work on his adventures once more.

Paul Gulacy’s art is consistent throughout and while there are some panels that aren’t the greatest Star Wars art by any means, having a single artist across a collection this size is a rare feat. Gulacy has some fantastic splashes throughout this collection and when Kanos adorns his armor he is a vision to behold. Gulacy does great Star Wars action justice and also pencils some impressive fleet scenes throughout. What struck me throughout this collection was how well laid out it is. The layouts and panel variations flow extremely well and there is not a single point in this entire collection where layout choice impede the readability of the comic. From start to finish, the art is consistent and solid: I can’t ask for a lot more than that.

This is collection is a great read, especially for any Star Wars fan. Expanded Universe titles vary greatly in quality and as a whole this is one of the best there is. Kir Kanos is a great character and the supporting cast help make for an interesting read from start to finish. Crimson Empire Saga is a great example of how creative consistency can lead to great things and I highly recommend this book to any fans of action/adventure titles.