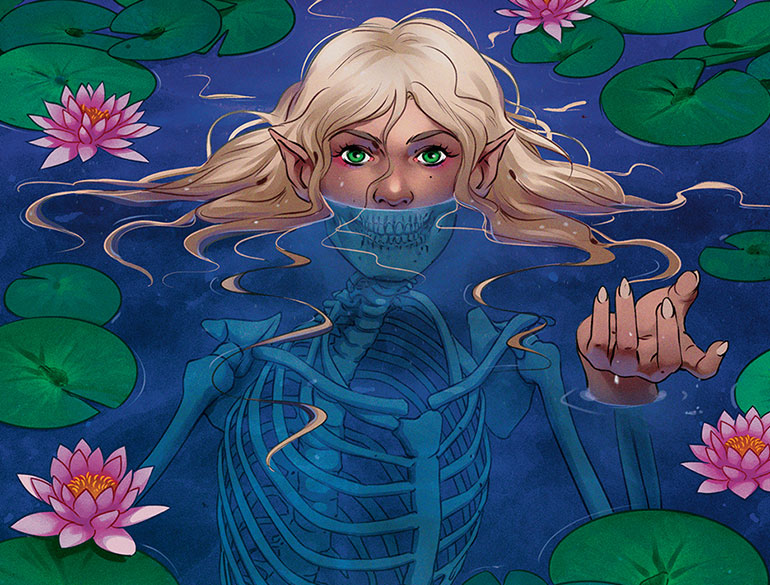 As Halloween fast approaches you might be searching for a something within the fine medium of comics to help you embrace and celebrate your own monstrosity. Well dear reader, you need look no further than Wayward Sisters: An Anthology of Monstrous Women.

Taking a break from my own monstrous pursuits, I spoke with a handful of the creators learn a little more about them, the anthology, and their views on monstrosity: Allison O’Toole, Janice Liu, Elodie Chen, H. Pueyo and Dante L. 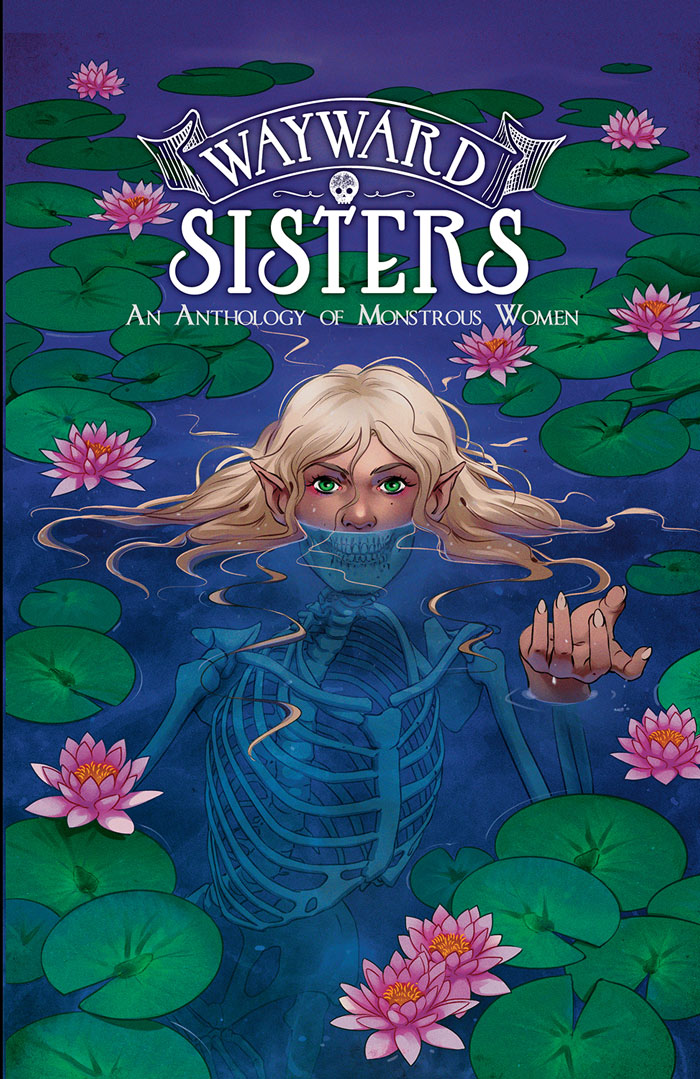 Kelly Richards: Thanks for taking the time to talk to us! If you wouldn’t mind please introduce yourself/your team to our readers.

Allison O’Toole: I’m the lead editor of Wayward Sisters. I’ve been editing comics for a few years for the Toronto Comics Anthology from TO Comix Press, as well as some books for Chapterhouse Publishing, including The Pitiful Human-Lizard, Life, Death & Sorcery, and some of their superhero titles.

I’m also writing a Hollywood Noir story for the anthology that’s being drawn by Emmanuelle Chateauneuf.

Janice Liu: Hi! I go by flutterdoodle on twitter, tumblr, and instagram. I currently live in Vancouver, BC, though I grew up in the Guangdong region, and lived in Toronto for a few years. I’m contributing a story called “The Wife’s Shadow”. 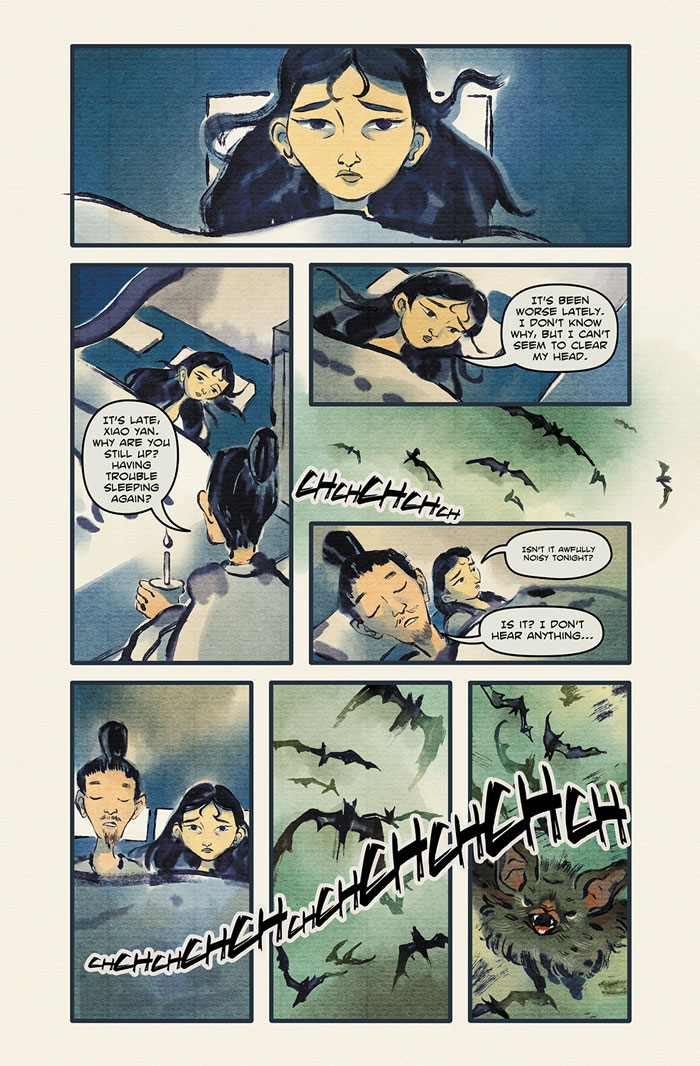 Elodie Chen: I’m the writer and artist of Skin Deep. I’m a graduate of the Savannah College of Art and Design, and currently working as a graphic designer out of Spokane, Washington. Wayward Sisters is my first comics anthology.

H. Pueyo & Dante L.: Hi, we’re H. Pueyo (writer) and Dante L. (illustrator), a Brazilian couple and creative duo. Our story is called “Alligator at the End of the World.”

KR: What drove your interest in this anthology?

AO: I grew up loving monsters, but I was frustrated that I so rarely got to see girls like me as monsters; kissing monsters, being killed by monsters, maybe fighting monsters, but the monster lady was rare, and almost always made for the straight male gaze (the non-binary/gender non-conforming monster is basically non-existent). I wanted non-binary and women creators to tell their own stories where monsters could be heroes or villains, but at least through a lens of lived experience instead of sexualisation.

JL: When I saw the call for submissions I immediately loved the theme and vision of the book – I thought it could lend itself to so many interpretations and stories with great flavour.

I also knew of the Toronto Comics Anthologies and their track record of successful kickstarters, and this motivated me even more to pitch to the anthology! 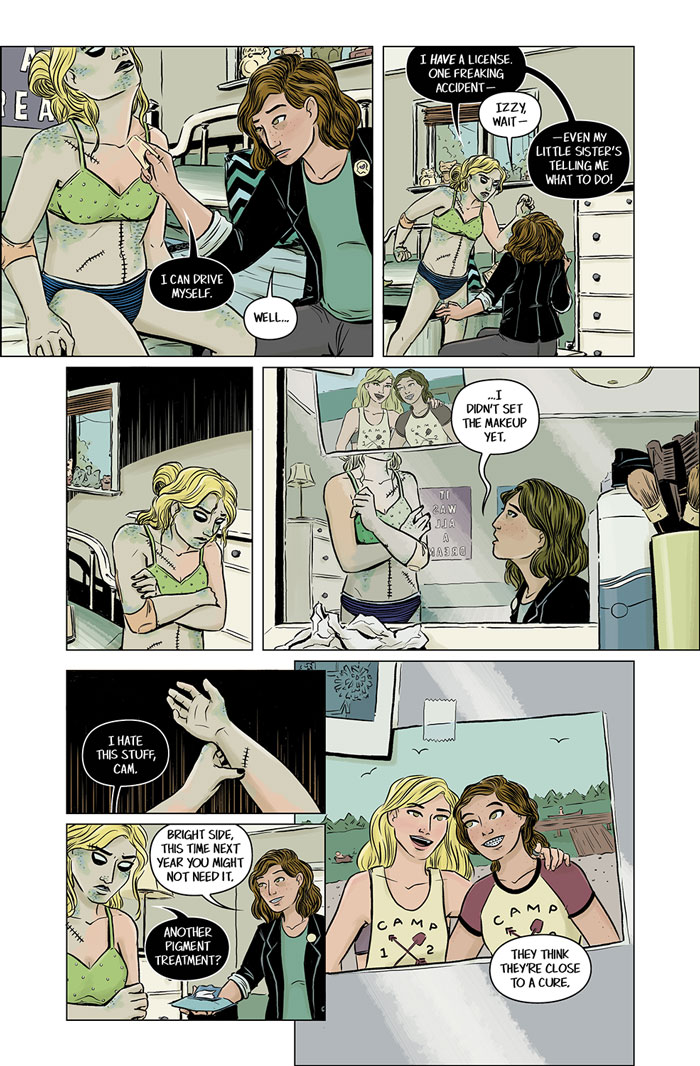 EC: I had been building the world of Skin Deep and thinking about the political ramifications of zombies in a pretty general sense for about a year before I saw the call for pitches on Tumblr.

Reading about what Wayward Sisters hoped to accomplish immediately gave me an idea for a short with two minor characters from the existing story. Izzy is a different kind of protagonist from what I am used to writing, and I was excited to get kind of messy and personal with her narrative.

HP & DL: The monsters, definitely! We were planning to create something using a creature from our country’s folklore for a while, and Wayward Sisters appeared in the right moment.

KR: How do you feel about the subversion of monstrosity into power for women/gender non conforming creators?

AO: Many of the monsters in our collection aren’t heroes, or aren’t powerful in the traditional sense. I think the power is in the viewpoint; when a creator tells a story about a character like themselves, the creators’ experiences inform how they tell the story, which means these are stories that couldn’t be told, at least not with the same nuance or perspective, by straight, white, male creators.

The power in these stories is that they’re unique and fresh because their creators are bringing viewpoints to the table that aren’t seen often enough in comics (at least, not mainstream ones). 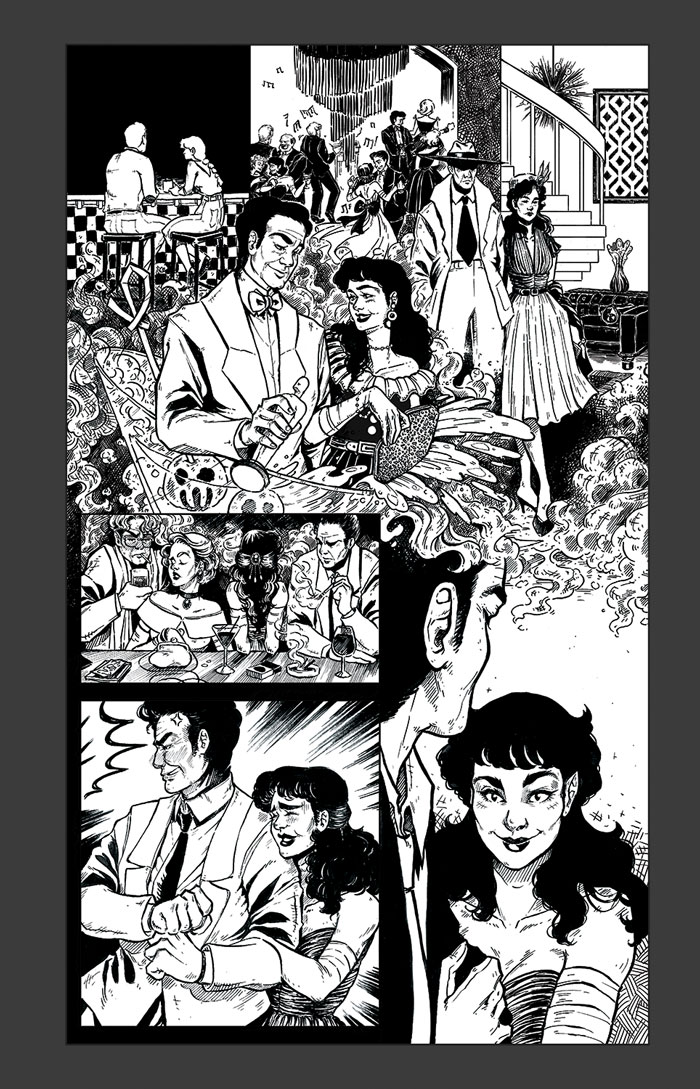 JL: I think it’s very important to tell stories about monstrous women that don’t assume a male point of view. Often, stories about female monsters are sending a cautionary message to men, to teach them what to fear in women (or to teach women how NOT to behave by getting them to place themselves in men’s shoes).

I love that this anthology centers women’s experiences, and having non-male creators tell these stories is such a big part of that vision. In my writing, I was interested in exploring monstrosity as the opposite of what is systematic and what can be named.

A monster is something that defies categories, expectations, and justification — and who is expected to conform to these things more than women (particularly women of colour)? My story is about finding freedom by first knowing your whole Self, not just the parts that can be named or explained.

The monster in “The Wife’s Shadow” represents a more authentic, more spiritual side of my female protagonist, a side of her unconscious that’s been unexplored and unheard. 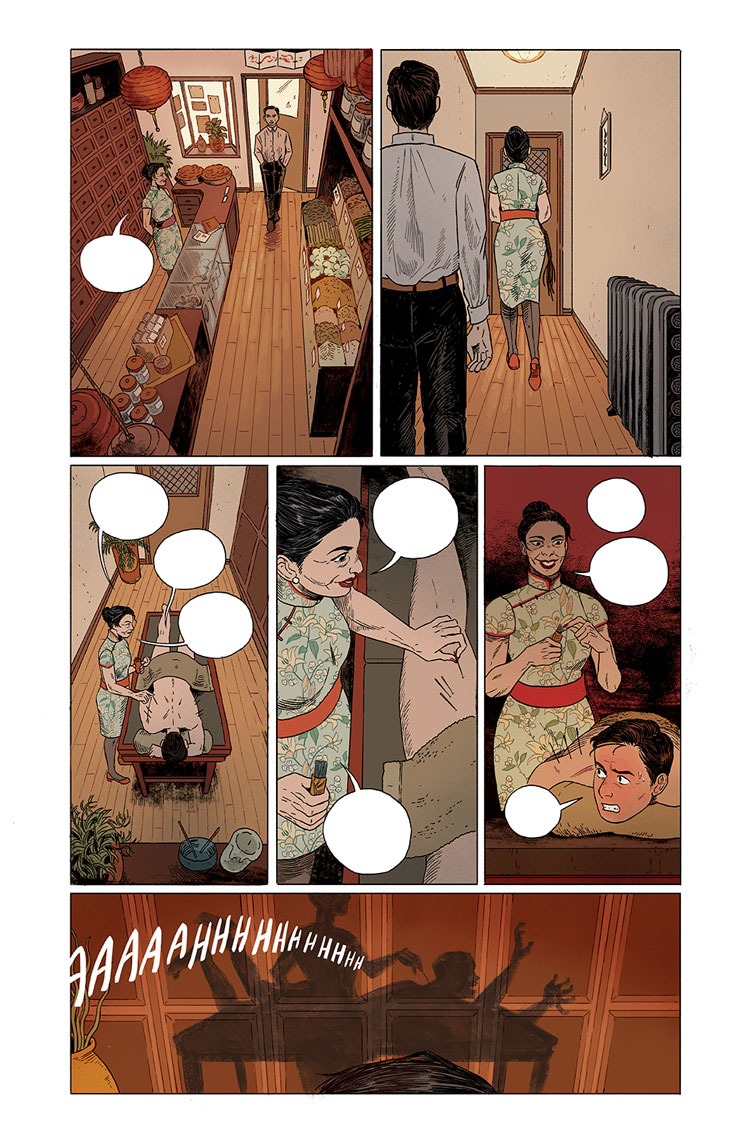 EC: This anthology is such a great collection of creators who might be marginalized in mainstream comics, and the range of stories in Wayward Sisters gives us a chance to really explore what the word “monster” means.

From a writing perspective, I love being able to pull apart and reframe a character, and with Izzy, it’s all about how she sees herself and how that intersects with how she’s seen by others.

HP & DL: Historically, monstrosity has been used to punish women, and it’s interesting to subvert this trope in favor of the character, not against them. Brazil in particular has the unfortunate habit of punishing female characters who are not virtuous, and we wanted to tell a story that allowed our protagonist to be as self-indulgent and morally questionable as she desired to be. 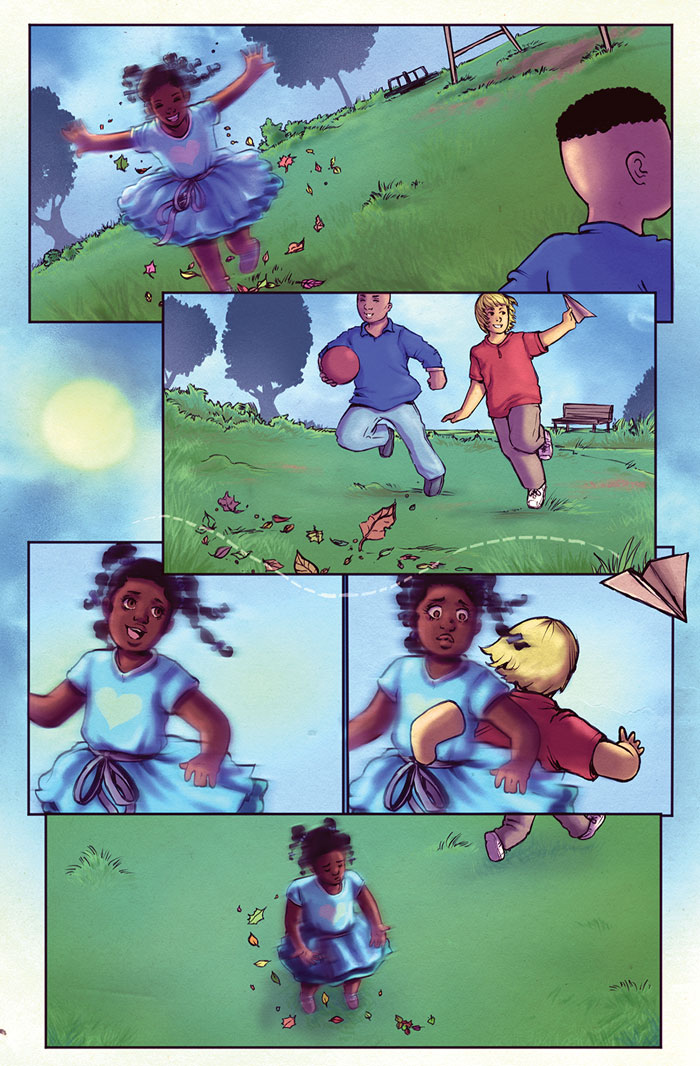 KR: To wrap it up, describe your story in 3 words.

Go now to pledge to the Kickstarter campaign for Wayward Sisters: An Anthology of Monstrous Women while you still can! Opportunity ends in less than two weeks!