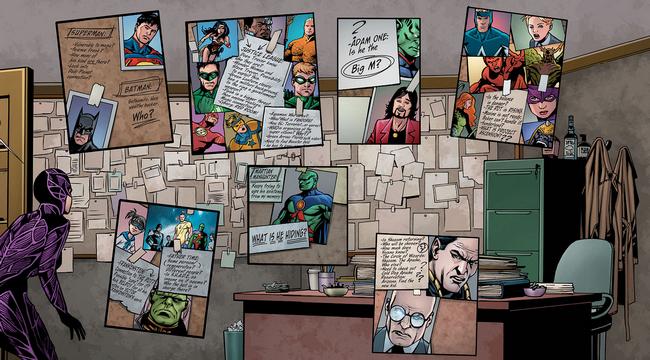 Years ago, Rip Hunter’s chalkboard in the mini-series 52 gave readers many hints for upcoming stories all over the DC Universe. Though Rip hasn’t reappeared so far in the New 52 (though we know from the Justice League International Annual that he does exist), his chalkboard has been replaced by John Constantine’s bulletin board.

In Justice League Dark #14, Black Orchid comes across a room in the House of Mystery where it looks like John is putting together notes on the heroes of the New 52. Most are speculations on secret identities (Superman, Batman, etc.), while others are a bit more obscure. 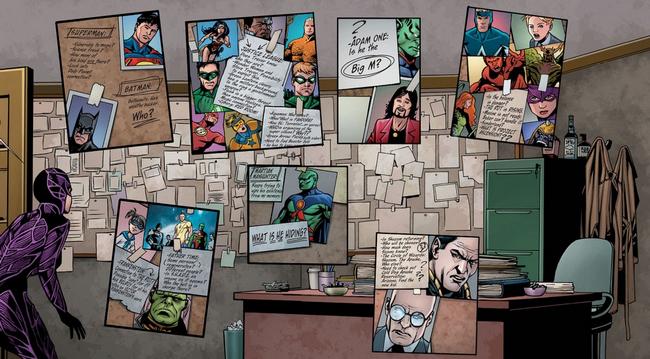 It seems John has already put together the identity of the mysterious Adam One — “the Big M” means Merlin. John is also very suspicious of the Martian Manhunter and S.H.A.D.E.

Does Trevor know who they are?

John has put a lot together on the Justice League, including being aware of the enigmatic Pandora, who makes a cameo in this issue. This block also seems to tease Lemire’s own upcoming take on Green Arrow and the much-anticipated Justice League of America.

What could be going on with The Flash? A magic connection to one of DC’s historically science-based characters? John seems to have some advance knowledge of next summer’s villain event that hit the rumor mill this week. Given Geoff Johns’ obsession with the 70s, perhaps this will be an updated version of the Legion of Doom.

Constantine is a manipulative sort and his notes show that he isn’t above using the past relationship of Steve Trevor and Wonder Woman to his advantage.

It is an interesting reveal that the Green Lantern ring being of extra-terrestrial origin is not public knowledge . The history of Green Lantern in the New 52 must be quite different than the hero of Coast City we had seen prior to Flashpoint. This also makes it probable that the Corps has never been stationed on Earth in any public way.

Most important to me is the inclusion of Booster Gold in this list. Constantine searching for Booster? Jeff Lemire must have gotten access to my 1990s dream journal. Where will we see the paradox-afflicted Booster next?

Lemire is teasing his own corner of the DCU in these blocks. Belroy is a scientist agent at S.H.A.D.E.  and most of these notes relate to Animal Man and the on-going Rotworld event. We know Frankenstein is playing a key role in Rotworld, perhaps “cure” gives us a clue to how that event will play out.

Sunderland refers to Avery Sunderland and/or the Sunderland Corporation, the research firm that funded Alec Holland’s research (at least in the pre-Flashpoint universe).

A subsequent panel shows us that Project Ascension is connected to Black Orchid.

Teasing the introduction of Shazam to the Justice League and the public at large is a list of notes about related topics. The last two notes seem to confirm that the Wizard seen in Phantom Stranger #0 is indeed the New 52 Apache Chief. The reference to “the new kid” may hint that they are merging the inherited mantle of the Super Chief with the character best known from the Super Friends cartoon. Good to know that John isn’t any further ahead knowing who the Wizards are than the rest of us.

Lemire is expected to be one of the key DC writers in 2013 and this glimpse at the year ahead gives us some interesting threads to follow. Now where are Booster and Rip …

Keith is the co-host of the podcast We Talk Comics and writer of the one-year blog project 900 Things.