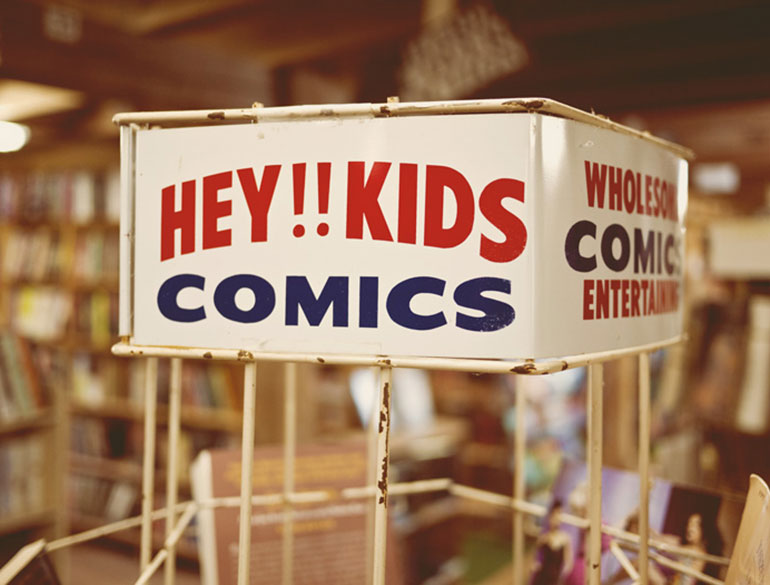 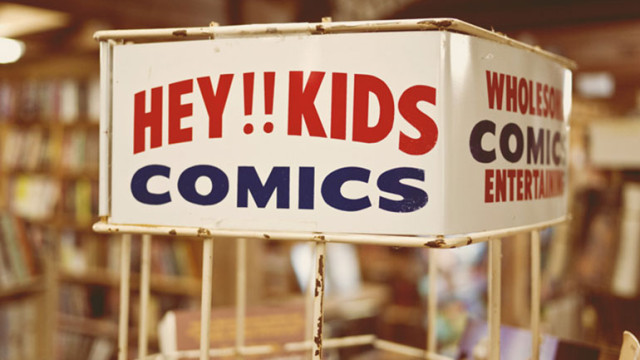 Since the days of the gold rush, dreamers have run to find their fortune. And just as the first miners sold their played-out stakes to the wave of suckers, those who were there in the early days of comic speculating sold high to late-comers.

You can draw a direct line from the first time there was a headline about the auction of high-value comic (likely Action Comics #1 in the 1970s) and the end of comics on the newsstands. 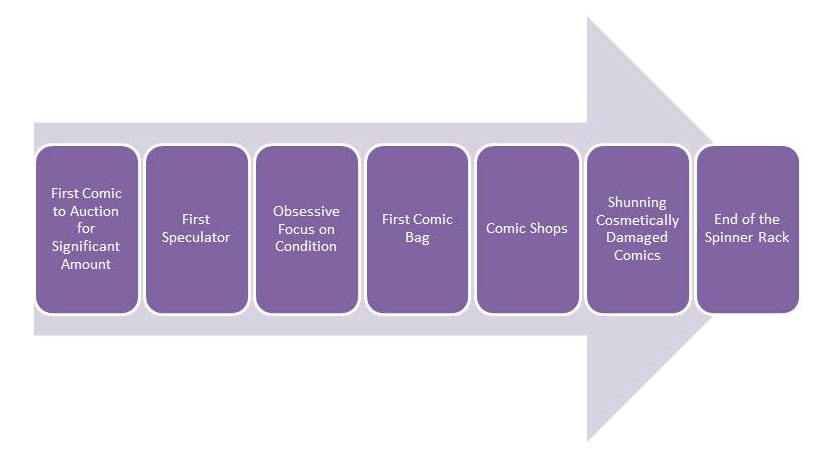 For every important and valuable comic, there are thousands that belong in 4 for a $1 bins. These dreams of the million-dollar comic led to line-ups around the block for The Death of Superman in 1992. But there are under 100 Action Comics #1s (a nasty side-effect of World War II-era paper recycling), the latest one discovered literally inside the wall of a house. Nothing will ever be that rare and important again.

While comic stores had existed since the 1960s, it wasn’t until the 80s that publishers found a market large enough to begin distributing books specifically to what became known as the direct market. The key part of this development was the demand for more mature or even adult content. The move away from the comics code-compliant newsstand to the gatekeeper of the comic shop gave us revolutionary titles, such as Swamp Thing, Hellblazer and Watchmen. The comic store became the venue for the serious comic fan.

With comic shows — and later, shops — came a focus on condition. Back issue bins allowed readers to travel backward in a way they rarely could before, but those comics had to be in as close to new condition as possible. 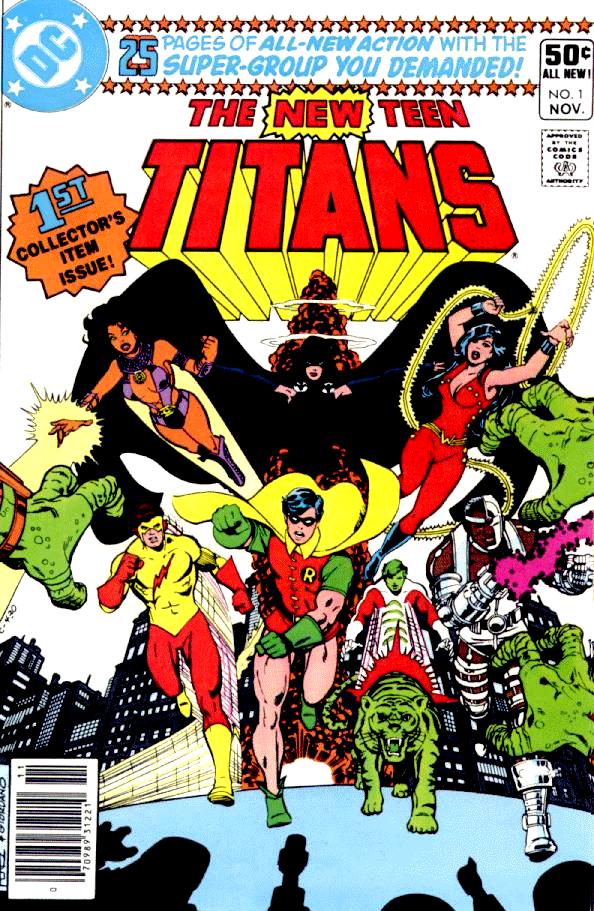 Stores not catering to condition-conscious buyers rarely had mint condition comics. Spinner racks often leave spine marks on comics and those in magazine racks get knocked around and bent. As the direct market expanded, it slowly ate away at newsstand and spinner rack sales. With only casual buyers to support that space on the shelf, it stopped being worth it for drug, grocery and corner stores to carry comics. Even when the product was returnable, the cost of shipping and returning remained.

Also lost when this market dried up were the piles of remainder stock. Until the 80s, these were bagged up 2 or 3 for small price and sold at department stores and the like. As a child of that era, I was able to sample many new characters through the magic of these types of packs. A pack that had issues of Action Comics, DC Comics Presents, and New Teen Titans meant I could read about more than a dozen DC heroes for a mere 99 cents.

Collecting Without Curating is Accumulating

Comics is one of the rare areas of collecting where its adherants worry about the condition of literally every piece they encounter. A stamp or matchbook collector doesn’t keep every single one they see. A handful of change from the coffee shop doesn’t make a coin collector run for the plastic sleeves, but those Free Comic Book Day comics seem to end up bagged and boarded.

As I went through the 900 Things project — the process through which I unloaded a significant amount of the material I’d had piling up in my life — I realized how comics have evolved from being a magazine to being a collectible. Fantastic Four bills itself as “The World’s Greatest Comics Magazine,” but we don’t treat them like magazines. Every comic has perceived value, but every magazine doesn’t. We recycle most magazines after we read them. We archive comics like they were ancient treasures. 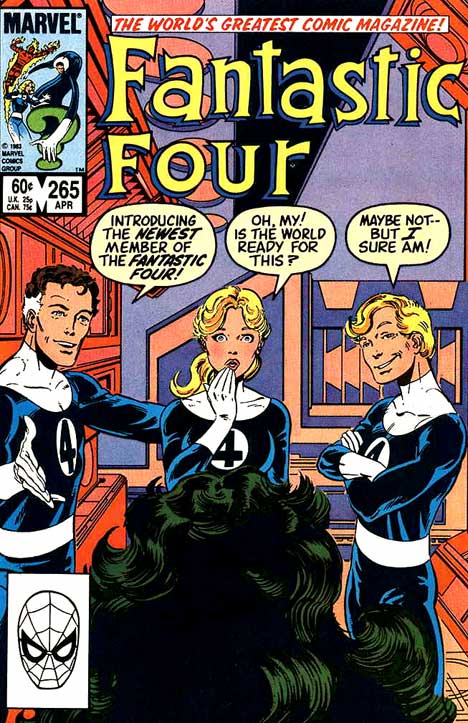 We, as fans, have developed an unhealthy attachment to the physical object of comics that is almost unique to this hobby. There is no more apt phrase than “fetishizing the physical” to describe this fixation on keeping the comic as pristine as possible. Even to the degree that some comics have come polybagged.

Comic books began as a completely disposable medium, made on cheap newsprint and traded by fans until the books fell apart. They were rolled up in the back pocket of a kid in the city or tucked into the rucksack of a soldier heading to war. The obsession with making the disposable permanent is the key to where it all went wrong. The first time a comic was slipped into a plastic bag unread, the medium changed irrevocably. The story that came alive began to lose footing to the concern for marks around the staple.

Variant covers are a symptom of feeding the fetish. In an age when any image can be possessed at the click of a mouse, collectors spend many times cover price for the cover itself. I see readers spending hours worshipping at the object — reverently bagging and boarding while a pile of potentially beloved books sits unread. As a collector I never went in for one bag and one board per comic, to be honest. I would pack them as many comics as would fit in the bag to keep them organized and in relatively good shape. Why spend that money on bags and boards when it could buy me 5-10% more comics?

The direct market books also experimented with higher paper stocks. Eventually all comics would abandon newsprint for super-white and higher priced alternatives. All paper has risen in price, of course, but this rapidly-rising cost combined with a higher expectation of object quality has created even bigger barriers for casual readers. You just can’t get a handful of comics for 99 cents anymore, and for the most part, it’s our own fault.

Comic stores cannot survive on casual buyers. It is no coincidence that the event crossover appeared as comic stores exploded across North America. If you wanted to follow a yearlong story with dozens of tie-ins, you needed more than the 7-11 spinner rack. For 30 years the market has been driven by longer stories, increasingly connected continuity and high-profile events. It is impossible to do a chicken-and-egg look at this stage of comics. Stores require it, many buyers demand it (even those who pretend they don’t), and the Big 2 publishers have come to rely on it for “sampling opportunities.”

The new refrain is “every jump on point is someone else’s jump off point.” Weekly comics buying is habit. Once you are in that cycle, there is the feeling that skipping a week or a month would mean you were missing out. Everyone selling comics — from publisher to comic shop — needs the weekly buyer to survive. The casual buyer just won’t suffice.

The lament of “where are the young readers?” is older than most of our oldest readers. In Marvel Comics: The Untold Story, Sean Howe reports creator and industry concerns with an ageing comic reading demographic as early as the 60s. Marvel, in particular, was primarily read by teens and college students. Creators were concerned that when that age group moved on there would be no next generation to replace them.

So they couldn’t let them move on. 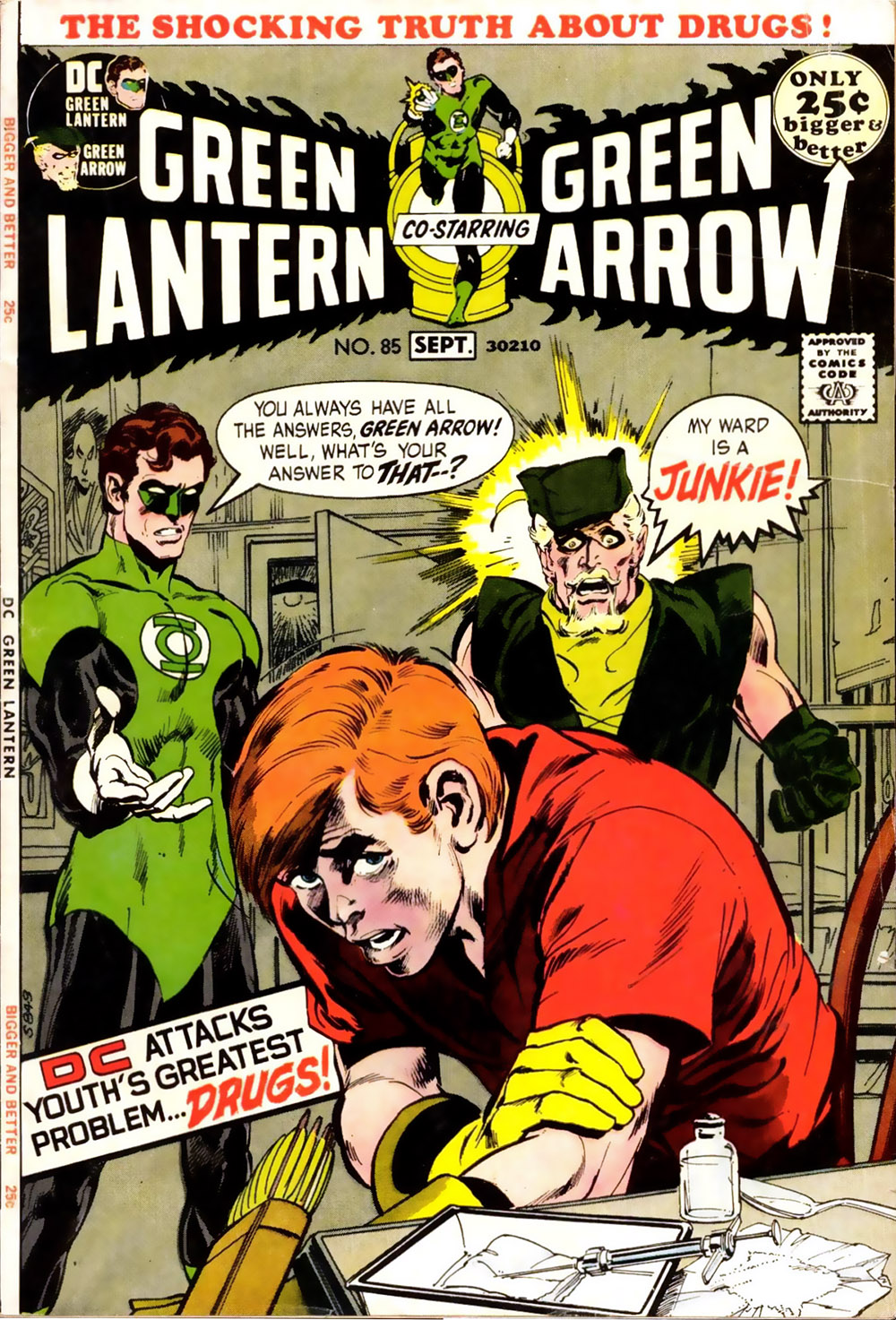 The stories started to grow up with the readers. More sophisticated subjects were tackled. Longer stories were told. Speedy became an addict. Gwen Stacey was killed by the Green Goblin. The X-Men were embroiled in the Dark Phoenix Saga for a year.

As complex as those stories were, they were still contained within a relatively small number of books. In 1970, Marvel and DC were each publishing only about a dozen titles set in their respective universes. That number exploded in the 1980s as the Big Two tried to drown out new publishers on the comic store shelf.

Complete, and admittedly simpler, stories were replaced by checklists. Readers were converted to collectors. Collectors were converted to speculators. And if you folded that comic up to fit in your pocket, there was no place for you in the comic shop.

The current ordering system is broken. Retailers have a harder job than ever and have to trust that what they order will sell. In the old days, back issues could be trusted to sell eventually as someone discovered a new book, character or creator. If you wanted to read it, that back issue bin was likely the only way.

Today, digital and trades have cut into that market to a huge degree. For those who want to read Neil Gaiman’s Sandman, they can get it digitally, in hardcover, softcover or omnibus. And they can get it that moment or overnight instead of hunting for months for every issue.

There are still those who try new books at issue #4, #47 or #477, but they are few. And worse, that sort of sampling has questionable impact on the sales of a book. That rare random sampler doesn’t help a retailer plan. The retailer has ordered two more issues when that #477 is grabbed off the shelf. It helps the store not eat the copies, but it’ll be months before it reflects in increased sales.

Retailers know with some certainty that buyers will sample a new #1. That new creative team or “new direction” seldom moves the sales needle all by itself these days. But what happens when that new book hits #4 or #40 (if they ever do these days)? We see it on the sales charts every month. Attrition has become an inevitability.

Is There a Way Back?

Put bluntly, probably not. Digital will change things, though. As some readers move toward digital as the single serving and trade as the permanent edition, there will be a shift. The only floppies I have purchased in years are those that are very unlikely to be available digitally or collected (I’m working on a complete New Universe collection, not in mint).

There is light in this tunnel though. Sales are growing but flattening. While the #1 book in sales is trending downward, the #300 is trending up. The May 2014 #300 on the sales chart shipped more than five times as much as those at #300 ten years before. Graphic novels and non-super-hero comics are gaining audiences. The Walking Dead has seemingly brought more new readers into the medium than the Avengers franchise as a whole.

But it has to be about readers. Skip the boards and get a couple of books you haven’t tried. Fold that cover back. Give a dog-eared trade to your niece. Let your comics live and breath. Or the whole art form will suffocate in an airtight CGC slab.

For tips on how to continue destroying comics, visit this informative WikiHow.

Special thanks to Calgary comic creator Jason Mehmel who was the first to use the word “fetishizing” when talking to me about print comics.