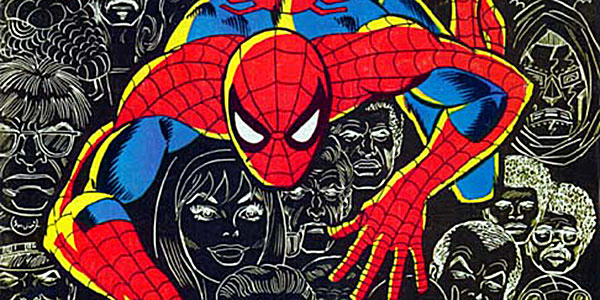 Amazing Spider-Man #700 came out this week and odds are you are going to react in an extreme way either for or against when you read it. Before that happens, let’s look back at the other 100th issue milestones from Amazing Spider-Man. Usually met with fanfare, it’s a bit of a mixed bag of the long-term impact of these issues on our wall crawler. 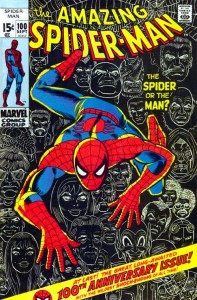 Peter has had enough and it’s time to get rid of his powers for good. Believing that he can never retire as Spider-Man while having the powers, Peter tries an experiment to remove them so he can finally settle down with the love of his life, Gwen Stacey. After taking the potion, Peter has a fever dream of battling his most vicious foes including Doc Ock, Green Goblin and Kraven.

TWIST: Peter wakes from his dream to find he has grown four extra arms! How will he get out of this one?

PET PEEVE: tagged on the cover as “100th Anniversary Issue.” Apparently the bullpen had everything except a dictionary. 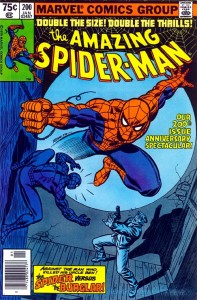 Powerless after a battle with Mysterio, and in bitter mourning over the death of Aunt May, Spider-Man finds himself facing off against the burglar who killed Uncle Ben! In what will be his last adventure in the Spider-Man costume, Peter finally captures the burglar and discovers that the reason Uncle Ben was killed was that there was a prohibition-era stash of billions of dollars in the house!

TWIST: Aunt May isn’t dead! And the money was eaten years ago by silverfish.

PET PEEVE #2: Now it’s the “200th Issue Anniversary Spectacular!” Those were some long days, it seems. 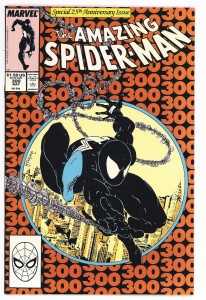 Following the final page of #299 introducing Venom, Peter comes home to find his newlywed wife, Mary Jane Watson-Parker, traumatized by Eddie Brock and the alien symbiote. Peter and MJ abandon their apartment for a new condo while Brock waits for his opportunity to get to Spidey, murdering the odd innocent bystander along the way. Spider-Man has a long running battle with Venom, ultimately defeating him and handing him over to the Fantastic Four (led by the spikey-rock covered Thing).

TWIST: Mary Jane can’t stand the sight of the black costume and she tells Peter he has to return to the old red & blue.

PET PEEVE #3 or NOT!: this time the cover marks the “Special 25th Anniversary Issue” and it really has been 25 years! … But Stan Lee’s Soapbox calls it the “300th anniversary issue.” I’m beginning to suspect I’ve found the problem. 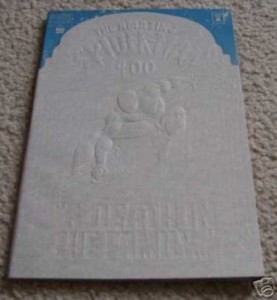 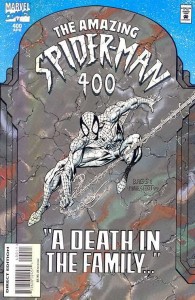 Clone Saga and embossed gimmick cover? Welcome to the 90s! Peter and Mary Jane rush to the side of Aunt May as she comes out of a coma. Meanwhile a tormented Ben Reilly, the Scarlet Spider, struggles with how to deal with the potential loss of May, a woman he only knows from implanted memories. Peter and Aunt May go to the top of the Empire State Building and May reveals that she knew Peter was Spider-Man since he was a teen. May dies quietly with Peter at her side and Ben visits her grave alone after the funeral.

TWIST: Peter is arrested for murder! Aunt May is dead! Again! Never to return! … right?

END OF THE PEEVES AT LAST: No cover blurb and Stan’s forward calls it the 400th issue! But then he invites us to be there for the 1000th issue… awkward. 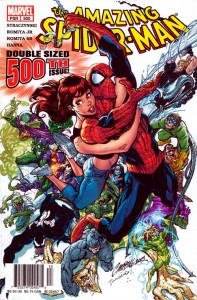 Into the 21st century it is increasingly difficult to pick up anywhere with a Big Two comic. I’m leaping into this arc at part 3 so bear with me if I stumble in my understanding. Spidey is lost in time and sees a version of himself in a dark future where all the other heroes are dead. Thrown a supernatural lifeline by Doctor Strange, Spider-Man is forced to fight moments from his greatest battles to make his way back to his time and save the other heroes. Then he goes home for his birthday party with Mary Jane and Aunt May … no, that must be someone else. Aunt May died 100 issues ago, right?

TWIST: For his efforts, Peter is granted a five-minute long wish. He chooses to spend it with his dear departed Uncle Ben (pencilled by JRSr). 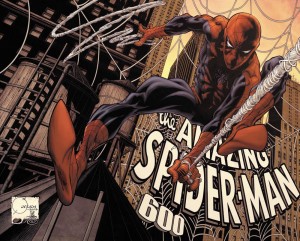 Doc Octopus is back and dying! On the day of Aunt May (hey! She’s back!) and Jay Jameson’s wedding, Doc Ock attacks the city with those 8-legged machines that turned up in #698. Ock is dying of a degenerative brain disorder brought on my being repeatedly punched by super-heroes and is looking to make a lasting mark on the city. He is stopped by Spidey and escapes. Peter gets things back in order and JJ performs the wedding. It’s the modern comics age so this bad boy has four variant covers. This issue is part of the backstory of #700 and worth a peek. It is also piled high with increasingly odd and unmemorable backup stories and gags.

TWIST: The return of Mary Jane Watson (nee Watson-Parker) who has been missing since all that stuff happened to make her not married. Also Peter finally learns that constantly removing his mask and telling everyone his secret identity isn’t a good idea (could someone let the movie versions know this?).

There you have it! Twists, turns, and unbreakable continuity shifts that you almost completely forgot ever happened.  If you enjoy #700, have fun on the rest of the ride. If you don’t, remember that this too shall pass.