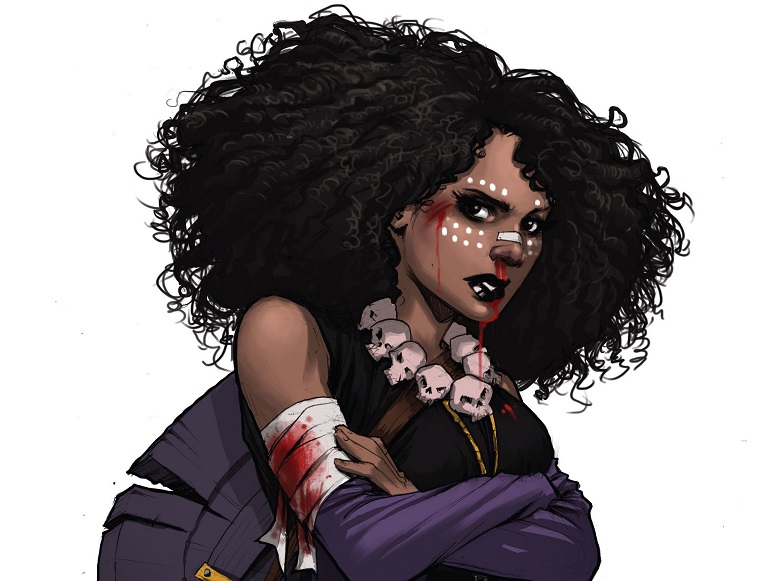 We are in the home stretch of the Representation and Health Black History Spectacular! Thanks for hanging with me this month as I highlight some of the many, though still underrepresented, Black characters in comics. Today’s character is a departure from the Big Two. She’s a high priestess with some hesitancies about her “faith.” When not conjecturing about the nature of tentacle deities, she’s handy with the sword and the healing spells. As part of the Rat Queens, she has created a family and is more than willing to take up arms for her friends. Alas, we will be discussing the spellcasting Dee! 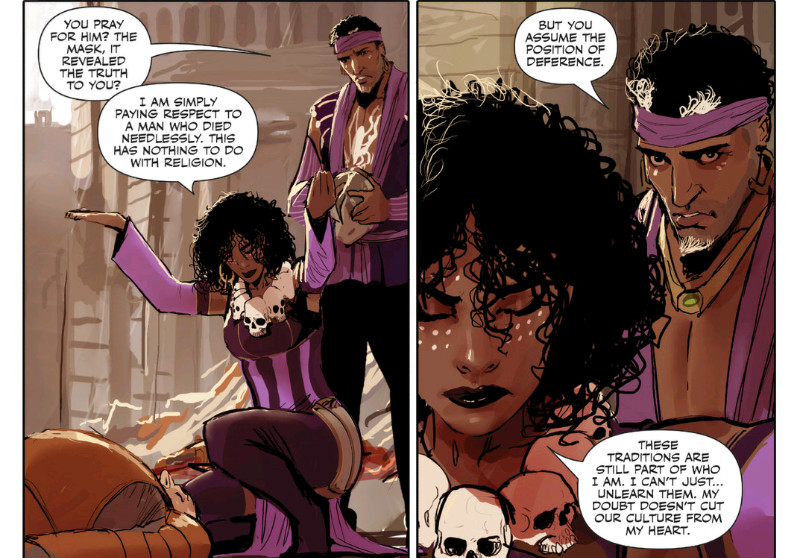 Dee’s narrative is striking to me for a couple of major reasons. Her misgivings about N’Rygoth are similar to the relationship many Black people have with religion. Considering that the stronghold of religion in Black culture is resultant of slavery, there are some mixed feelings for many of us. Dee experiences a similar struggle, in that she isn’t sure if what she grew up in is actually real, though she finds out later what the truth is. Her brother has completely eschewed their faith and taken up a different meaning for his life. I love that they both still connect with and love each other and that their feelings come from a similar place, though they manifest somewhat differently.

Taking further this analog of Dee and the Black Church, consider that, once she finds out the truth, she is hellbent on “protecting” her people from their deity. In many ways, we have to do this today. Not to say God is literally out to get Black people, but that sometimes the Black faith and church end up doing us harm. I see this in religion’s place in homophobia and transphobia among the Black community, how it supports rigid patriarchal standards that harm Black women, how it keeps people away from mental health. Faith truly can be and is a beautiful thing, but we must also see it for its sometimes sinister derivatives and find a way to remedy them. Dee seems to exemplify this battle with religion and faith, albeit under very different circumstances. Personally, reading her is affirming for me, as I had my own issues with Christianity and eventually left, finding myself much happier though frustrated with family’s insistence I go to church because it’s “good for me.” 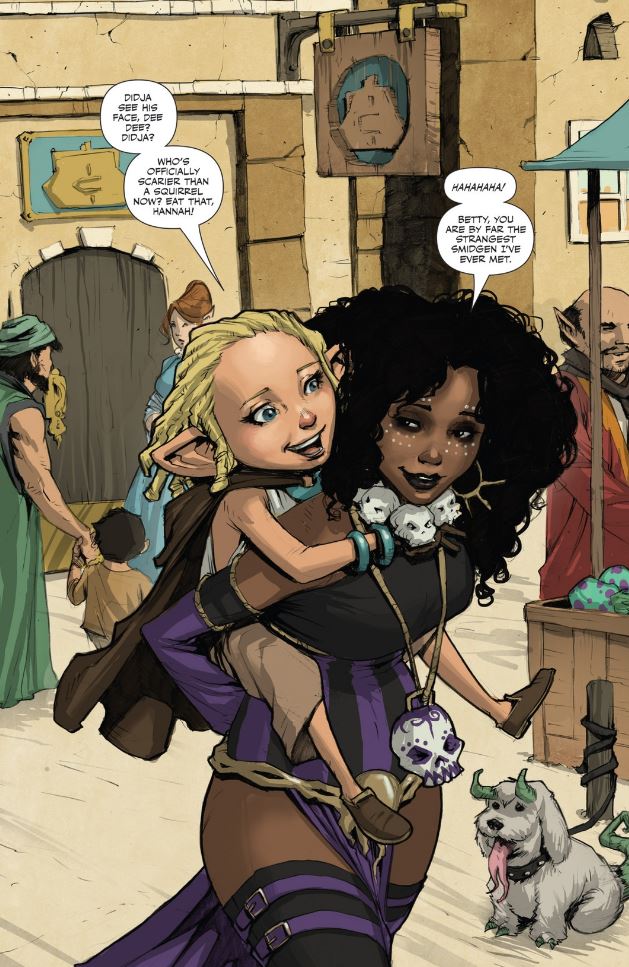 I have one minor point of contention with Dee’s representation. Her visage is a bit typical for Black magic users, and for me invokes the idea of a voodoo priestess. The images of skulls and her tribal appearance are not much of a departure from how we conceive of Black people doing magic. This to me is a double-edged sword. In some ways, Dee is a way of honoring Black mystical and cultural practices, respecting that various Black cultures did connect to mysticism in rather specific ways. However, I considered, “What if Hannah and Dee were switched?” which actually is a cool idea. While Dee has gotten a lot of focus, there’s clearly a bent toward Hannah, by no means a bad thing, and a Black primary lead in a story like Rat Queens would be awesome. However, Hannah in Dee’s place could have traces of appropriation, though this would be strictly and specifically taking on her image. That’s not to say this is the ONLY way Dee could have a different image, but it does speak to expanding how we view Black bodies in fantasy settings.

On this note, it’s nice that Dee is a principle character in a fantasy world that is actually diverse. Considering the context, this means that Dee does not have to carry the weight of Black women on her shoulders. She gets to be more fully human, not typecast or stereotyped. One of my favorite things about her is that there’s an entire lore surrounding her and her people and she is at the helm of it, at one point rather literally. Exploring such a position of power through a Black woman is monumental and I hope we see more about this in the future.

Dee is an excellent character through which to explore narratives about faith and where to draw lines. While there is some regret behind her decision to leave the Jarani, and her mother, behind, she knew that it was the right choice for her. These decisions are hard within the Black community as there is a sense of community and family within the church for many, while others experience more doubt and discomfort. I think Dee could provide people with some introspection regarding whether or not to stay in the faith, important because we don’t always get it and to doubt God can sometimes be seen as blasphemy. Beyond her multifaceted portrayal, Dee is someone I bet many of us who are Black and non-believing, or even questioning, can connect with.

How do you feel about Dee and her portrayal in Rat Queens? What are your thoughts on fictional and magical Black people? Send me a line on Twitter at @80Grey and check out the rest of the Representation and Health Black History Spectacular as we wrap-up this week!