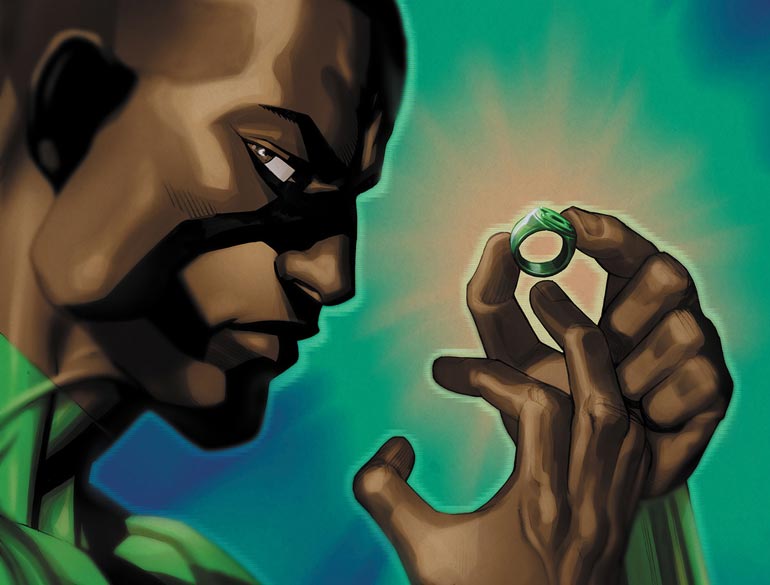 It’s time for another Representation and Health Black History Spectacular article and I’m particularly ready to jump into this one. With each new column, I realize how much more complex these characters are and today’s character very much fits that description. Whether you first encountered him on the page or in the cartoons, he is a remarkable character and there’s a lot to unpack. So, let’s discuss the Green Lantern John Stewart. 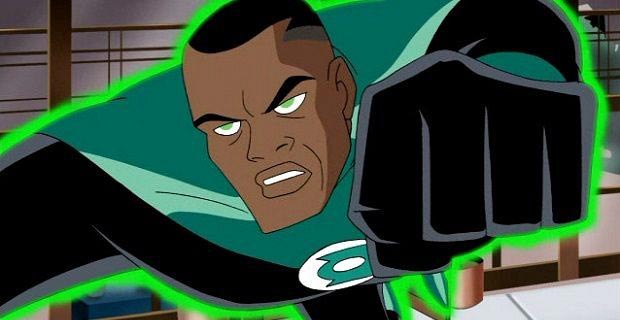 Like many people growing up in the 90’s, my introduction to John Stewart was the Justice League cartoon. I had some familiarity with the Green Lantern around the time, as I had asked for Green Lantern comics for Christmas, and I knew he was ‘White’ but also didn’t bat an eyelash when he turned out Black in the Justice League series. To me, it truly made no difference, but I was excited to see him in action and for a long time he was my idea of Green Lantern.

I wasn’t the only one with this sentiment, as many people decried the casting of Ryan Reynolds for the Green Lantern film. This was humorous to me, as by this time I was in college and understood more about continuity, but it was heartwarming. So many people didn’t consider their Green Lantern to be White, to be Hal Jordan. Many people around my age saw him as Black and were willing to fight to make sure the world understood that. 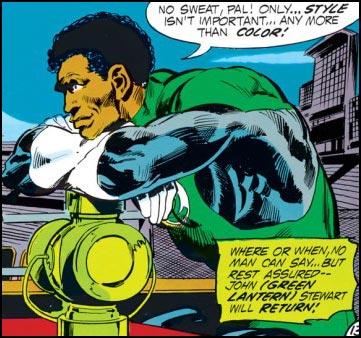 I didn’t know it at the time, but my first introduction, which would also be my first comic book, to John was in a Green Lantern comic with Kyle as the main star. He was wheelchair bound, and I wouldn’t find out until years later that this was him and why he was temporarily disabled.

However, John’s first true appearance was in Green Lantern #87 in 1972 as a back-up for Hal Jordan. He came on the scene as assertive, which you can imagine went over well in the 1970s for a Black man. Race was a common part of his narrative as he cemented his role as a Lantern, but also a hero within sector 2814. Through his time as a Lantern, John faced the monumental guilt and grief of failing to save the planet Xanshi, home of Fatality, and the loss of his wife, Green Lantern Katma Tui. 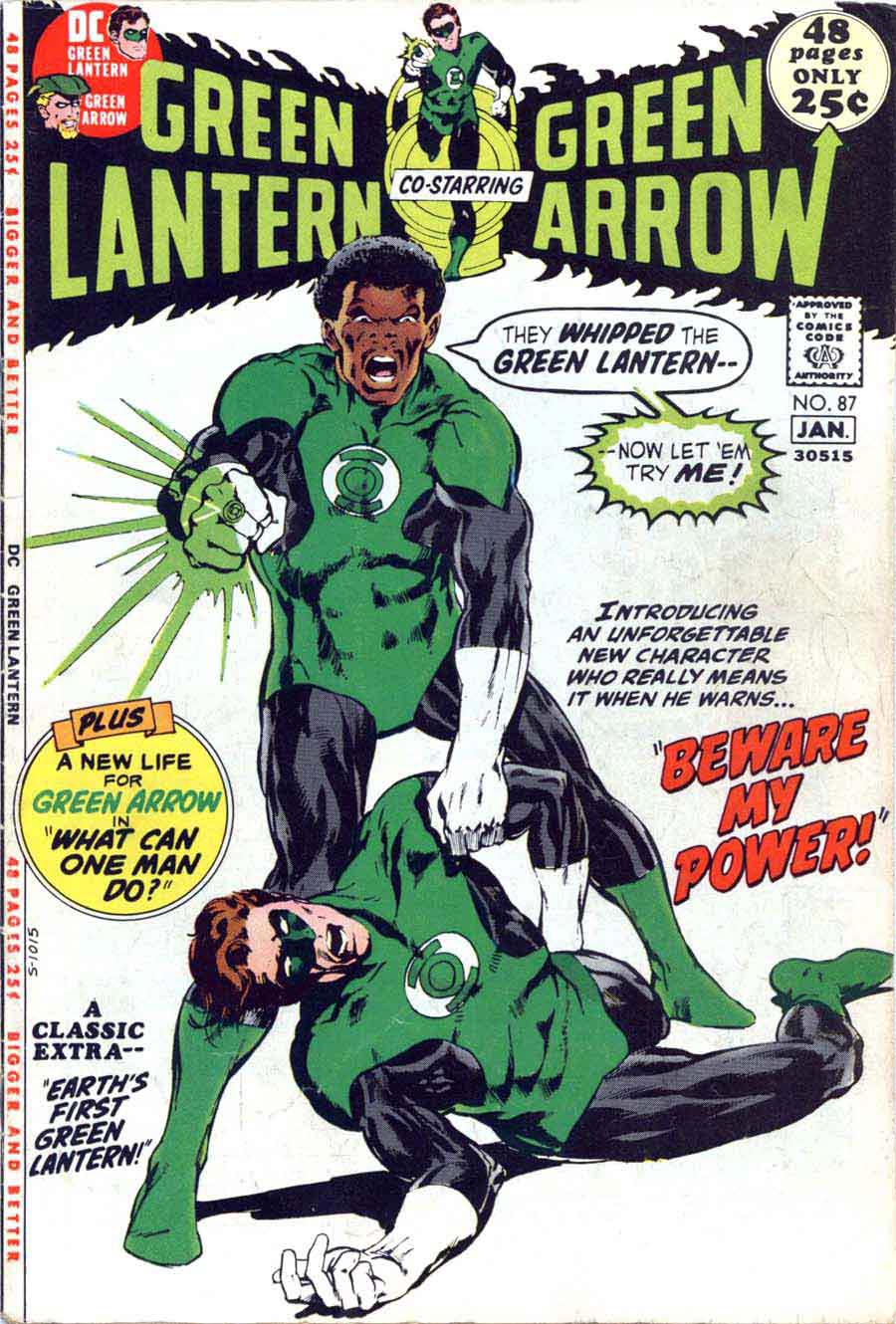 Despite his setbacks, John has been present to help dispel a number of galactic threats. He witnessed Hal Jordan as Parallax destroying the Green Lantern Corps during the Emerald Twilight storyline, later becoming a Darkstar. While he rose to leadership in this new organization, he was later rendered paralyzed by Grayven during his tenure as a Darkstar. Both Hal Jordan and Kyle Rayner would heal him, only for John to find that his paralysis was psychosomatic in nature, created by the guilt of losing his sister in a car crash.

Recovering his ambulatory abilities, John would later play a major role in the Sinestro Corps War, Blackest Night, in which dead character were reanimated with Black Power Rings, Brightest Day, and the War of the Green Lanterns. As the universe underwent a major change post-Flashpoint, John would remain a Lantern in the New 52 and continue to hold his title as one of the honorable Green of Sector 2814. He is currently in Green Lantern: The Lost Army as one of the lead characters. 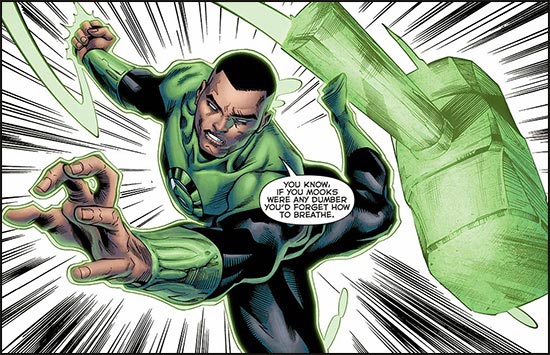 John’s initial appearances were important for addressing the effects and impact of anti-Black racism. As an outspoken Black man, John faced varying forms of racism in his early years of publication. Off the heels of the Civil Rights Act and a burgeoning presence of Black people, DC seems to have decided to capitalize on Black sentiment of the time. It’s important that these feelings were captured within a Black superhero, though it lead to points of contention between him and others. I’m grateful for these types of narratives because they address issues of racism head on, rather than simply putting them in Very Special Issues for us to immediately unpack and then leave alone. 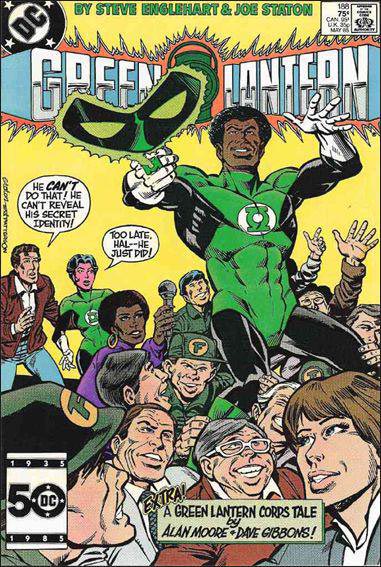 Part of John’s value comes from his presence in the Justice League and Justice League Unlimited animated series. His portrayals cannot be fully divorced from his history in the comics, as both help to highlight his position in the public eye as DC’s likely most prominent hero. The decision to use him in animation, which was able to reach many more people, meant changing the status quo and refusing to only let superhero media cater to Whiteness. For a generation of people to grow up and expect John to always be their Green Lantern was important and reflective of why we must make such decisions in various types of media.

One issue illuminates John’s role as a Black man in comics and how he pushes Black narratives further. In Green Lantern #147, he sits with his therapist and recounts all of his past sins. He reaches one particularly difficult and dark place he had managed to repress for most of his life. In a car wreck, he not only totaled his aunt’s car but his sister, Rose, died in the process. The loss of his sister plagued him for many years, even hiding underneath his mistakes as a Lantern. Without processing the grief, guilt, and shame, he could not fully gather the will to walk again. This issue was emotionally raw and demonstrated how much John had held on his shoulders. 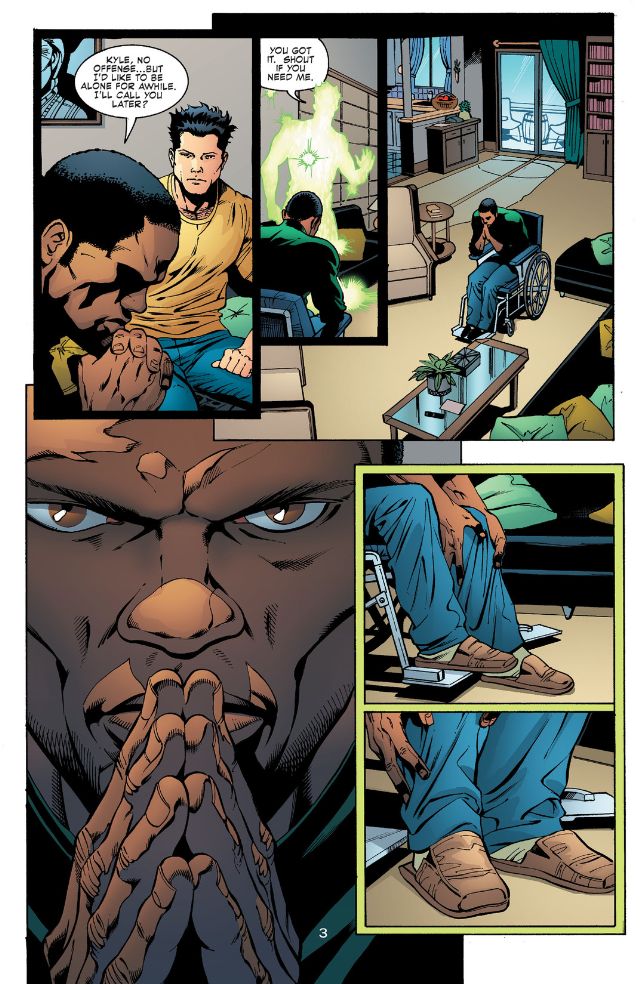 After living under an abusive father, blaming himself for his sister’s death, and facing racism in his employment, John had come to hold the weight of various forms of pressure. Through a timely therapeutic intervention, he was able to move closer to these wounds and begin remedying them, giving himself the capacity to heal. Watching a Black man experience such emotional trauma helps us to redefine and put in perspective the pain that many Black men feel today.

Society sets up a game that inhibits men from fully accessing emotions, and Black men face this expectation for reasons beyond simple masculinity. John’s ability to work through such difficult feelings provides an anchor for Black men to further explore their own trauma, lest they perpetuate them in tragic ways, as is unfortunately more common than you may think. Giving such evocative narratives to Black characters is important in making us appear more human, rather than at the mercy of our emotional challenges or simply just ‘angry.’

John’s military history is also vastly important in the context of him as a Black character. This part of his past was prominent in stories like War of the Green Lanterns and relates to the narrative of many Black people to day. In a country where Black people often have less resources, income, and opportunities, the military is often a way to gain such things after graduating from high school. 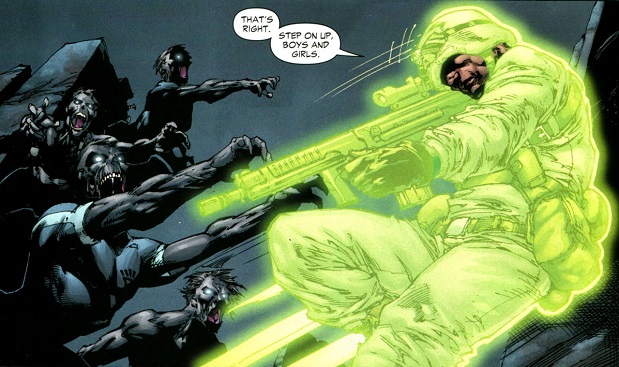 Within my own family, I’ve seen my siblings, cousins, and other family members enter the military for various reasons including the prospect of making a living in America post-recession. John’s life as a soldier helps to bring to light the reality of the military as a viable option, despite its inherent issues. Such stories are important because we need to address why Black young people choose the armed forces and that it is not uncommon for this to come from a place of need.

John’s presence is important because he’s prominent and he has a varied history as a Black man. Within his narrative we are able to address many issues affecting Black men and people, from racism to joining the military despite a racist nation that sets up barriers against us. He has many valuable attributes and has to look his guilt in the face in order to do his job and protect the cosmos. Despite his difficulties, John is able to rise to the occasion, working through his personal issues in time to take care of immediate threats. There’s a reason that John has been through various ranks in the Green Lantern Corps, from Lantern to Guardian, and there’s a reason he’s widely respected in the DC universe. 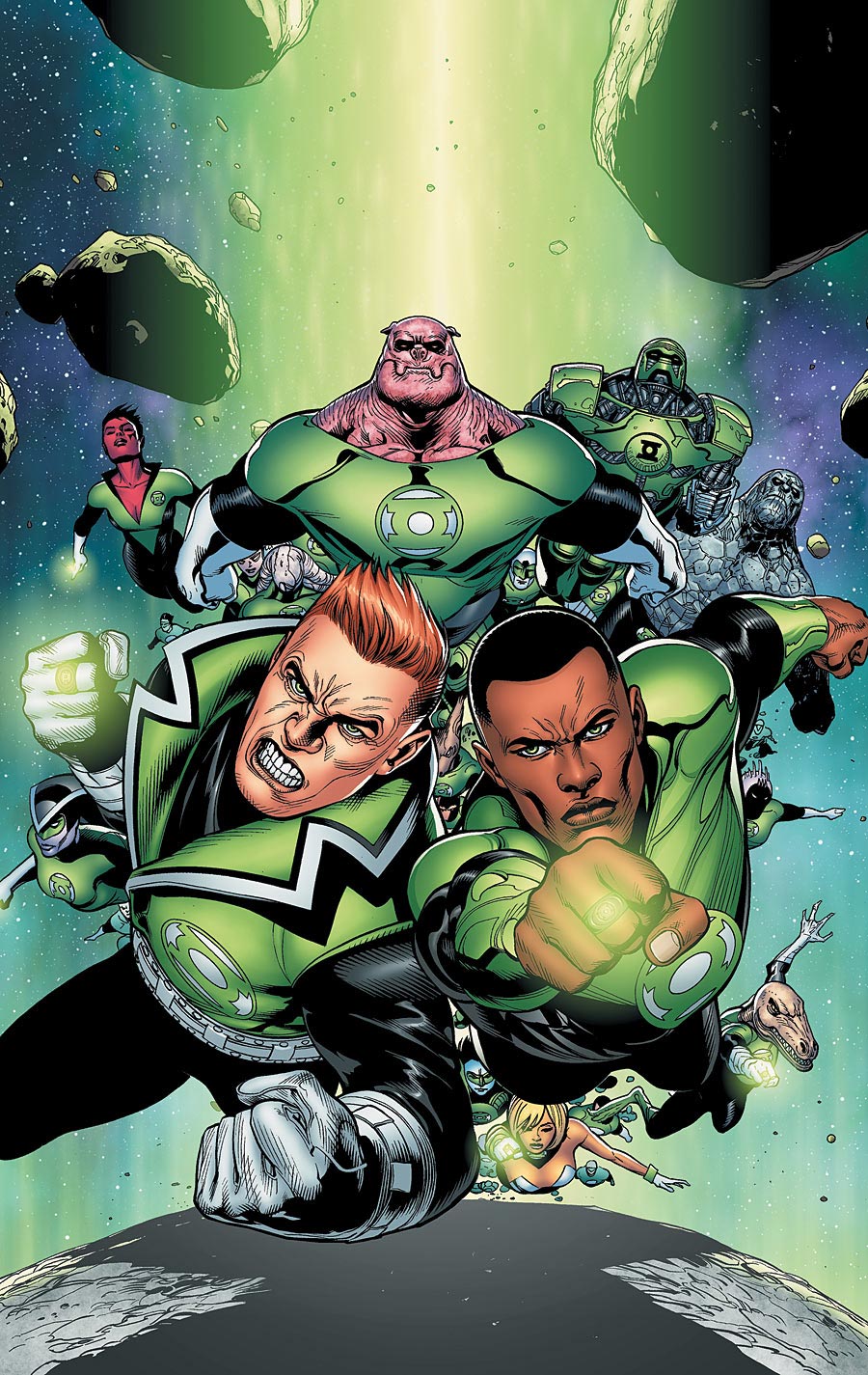 What else do you think there is to address in John’s story? How does he enhance representation of Black men and Black people in comics? Let me know on Twitter at @80Grey! In the meantime, stay on top of the rest of the Representation and Health Black History Spectacular articles!