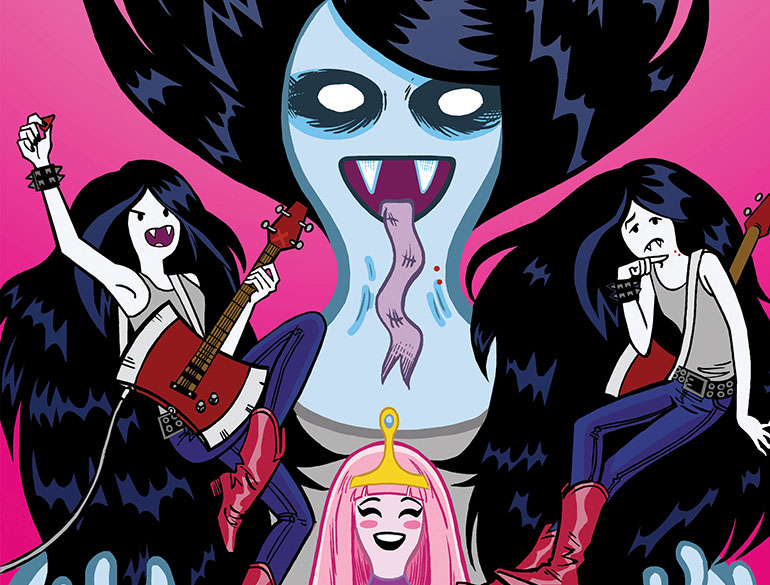 It’s a return to the traditional format in this latest installment of Representation and Health 101!

The comics world has been abuzz about diversity, for a lot of different reasons, so I wanted to touch on a character who represents this ideal and helps us cope and heal. To that effect, I’ve decided to talk about one of my favorite animated characters who’s crossed over into the world of comics under BOOM! Studios. She’s the rocking half-demonic vampire queen with an art for snark and a bleeding heart. I present to you none other than Marceline, the Vampire Queen! 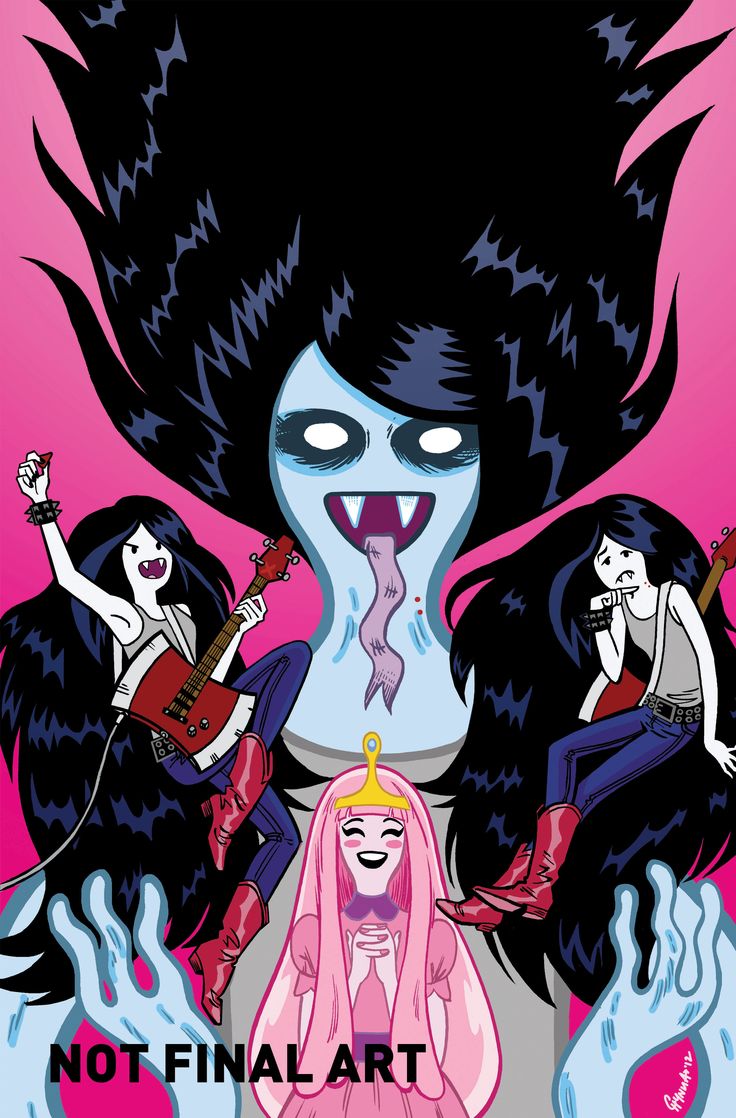 While Marceline has been an Adventure Time fixture since the early in season one, her initial appearance in the comics came with the first issue of the Adventure Time comic. She shows up for random adventures with Finn and Jake, but has also gotten to have her own adventures. As the Vampire Queen, she rolls through the land of Ooo with her axe in hand, putting on shows and having the occasional spat with Princess Bubblegum. Marceline’s presence in the comic mirrors much of what makes her a great and complex character in the tv, and that’s what we’re going to focus on.

One of Marceline’s miniseries, Marceline and the Scream Queens by Meredith Gran, Lisa Moore, Steve Wands, Kassandra Heller, and more, captures important messages that I feel are worth discussing with an all-ages group. Within the story, she goes on a tour with her band, the Scream Queens, only to be met with terrible and hostile reviews from a “random” tabloid journalist.

She becomes more and more emotionally taxed, stressed with performing, having Princess Bubblegum as a manager, and dealing with disparaging reviews of her concerts. This culminates in her extreme anger, then realizing the importance of emotional vulnerability. Marceline works through her anger in a way that many adolescents would, making this story a useful tool in discussing pain and disappointment. 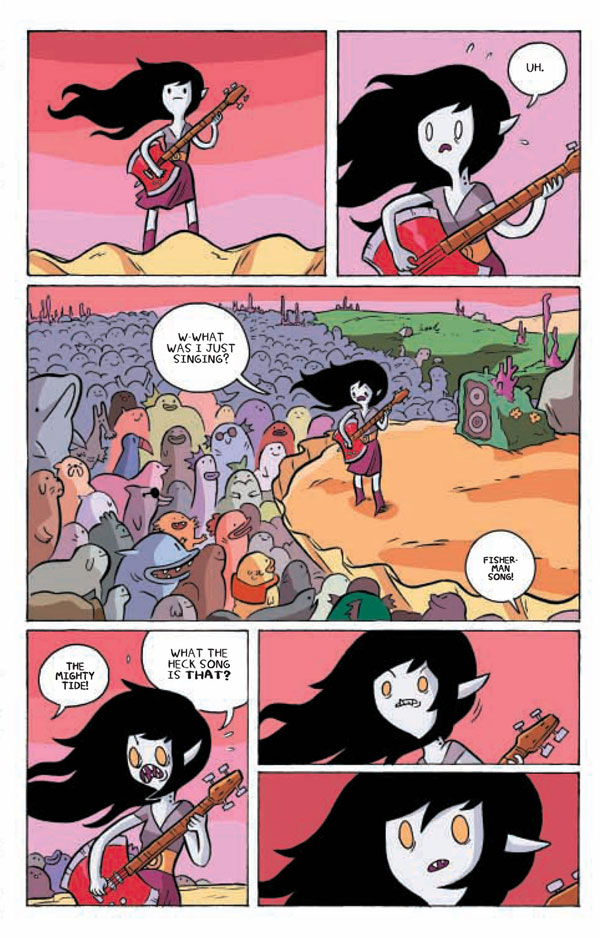 Marceline is important as a character because she encompasses the range of emotional experience for many people. While she seems punk and hardcore on the outside, her complicated life lends to a narrative that could potentially help many people process the events of their lives. She’s lived through a thousand years, a nuclear fallout, losing her dear friend, confidant, and protector, and yet she sticks around. Her “Staked” episodes of the animated series bring many of these themes to the fore, as she looks to become more “normal” but realizes the significant cost of doing so. Within the comics, Marceline is truly no different, and there are times where it feels as though we get to experience more of her and her background, diving into the labyrinth of Marcie’s existence.

Beyond the emotional topics that emerge in her narrative, Marceline also hold identities which are not routinely discussed in comics. In the episodes comprising “Staked,” it’s revealed Marceline’s mother is a woman of color. Rebecca Sugar, noted creator of Steven Universe and major contributor to the Adventure Time series, also confirmed that Marcie and Peebles previously had a romantic relationship. While the gray sheen of her skin may not show it, Marceline is essentially a queer woman of color. 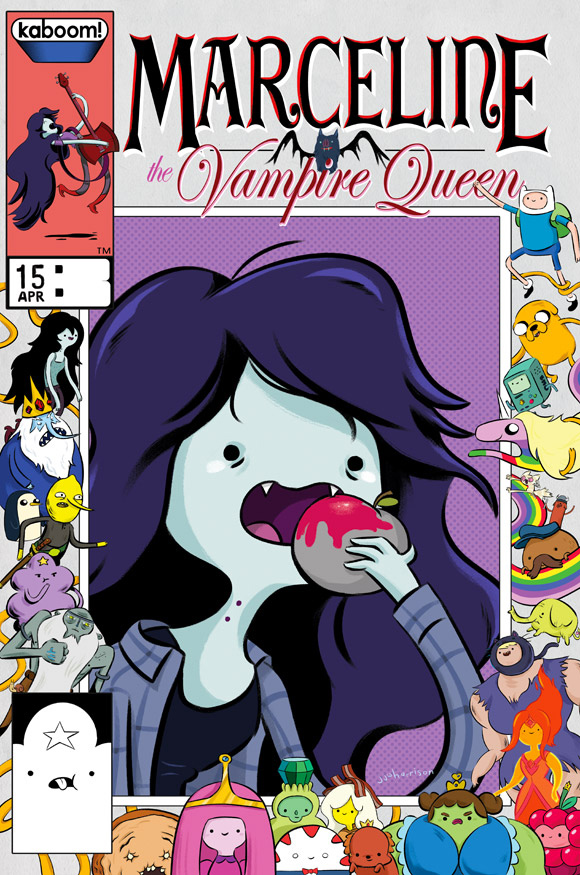 Noting the nuances of Marcie’s identities not only enhance representation, but they point to the idea of managing emotional experiences as a marginalized character. Marceline provides an opportunity to explore the feelings surrounding being left alone, the end of a relationship, and reconciling familial ties. We don’t have much info regarding her relationship with her mother, but I’d argue it’s definitely better than her relationship with Hunson Abadeer, who she reveals only gave her demon DNA with none of the perks.

Processing family issues, especially families of origin versus families of choice, is an important topic for many queer people. This theme adds another level of analysis to Marceline’s character that could be helpful in enhancing coping for women of color, queer women, and queer women of color. Marceline embodies many of the experiences people face which challenge their well-being in a multitude of ways. Developing a family of choice, as Marcie has done with Finn and Jake, can be one of the most curative experiences for queer people considering that social support is one of the major protective factors in mental health for people within the community.

Marceline’s relationship with Princess Bubblegum, while not explicitly stated within the series, could also be a method of helping people cope with grief and the end of relationships. Many moments between the two are tense and it takes a while before they begin to reconcile. For queer people, intimate relationships are sometimes the only bastion of safety, security, and openness, which creates new dynamics when intimate partner violence emerges and compounds grief experienced after the dissolution of a relationship. Marceline embodies many of the experiences we feel, especially in the context of her living through the Great Mushroom War, once our time with someone else ends.

There’s so much to unpack about Marceline that provides valuable tools in helping people cope with a wide range of experiences: grief, loss, isolation, relationships, anger, and many more. Having her in comics means we get to dive into her story in a possibly more intimate manner. Seeing these themes within her stories could help so many people, especially queer people and women in color. I appreciate having these narratives in comics because they  show just how important stories of emotional coping as marginalized people are.

What do you think of Marceline as a character? How do you think her portrayal in the comics works with her presence in the animated series? Let me know on Twitter at @80Grey!