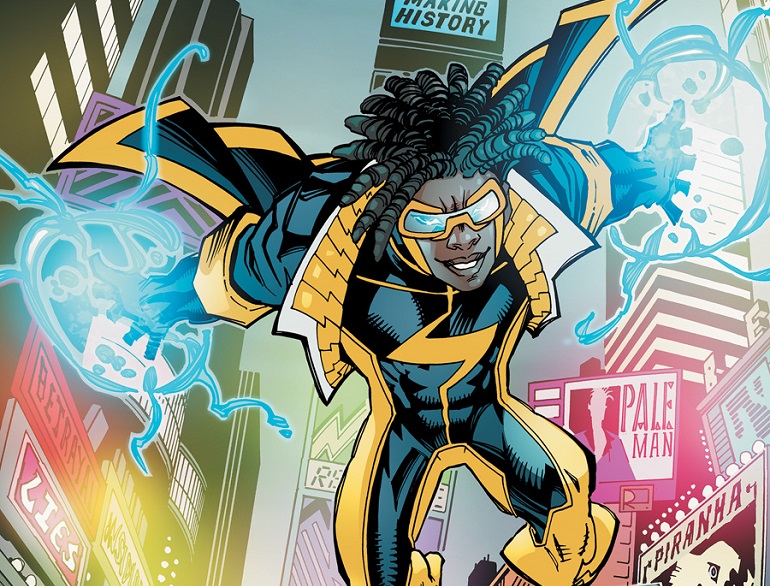 I’ve been at the ready to get into this particular installment of the Representation and Health Black History Spectacular, and it was one of the more personal ones for me to write. It’s been a great ride discussing Black characters in comics, but today’s focus is near and very dear to my heart. A native of Dakota, this young man is the premiere hero of his DC-offshoot city. With a knack for science and a love for the preservation of life, he patrols the streets to help control the rally of Bang Babies created when he received his own powers. Here he is, the master of electricity, Static Shock, aka Virgil Hawkins! 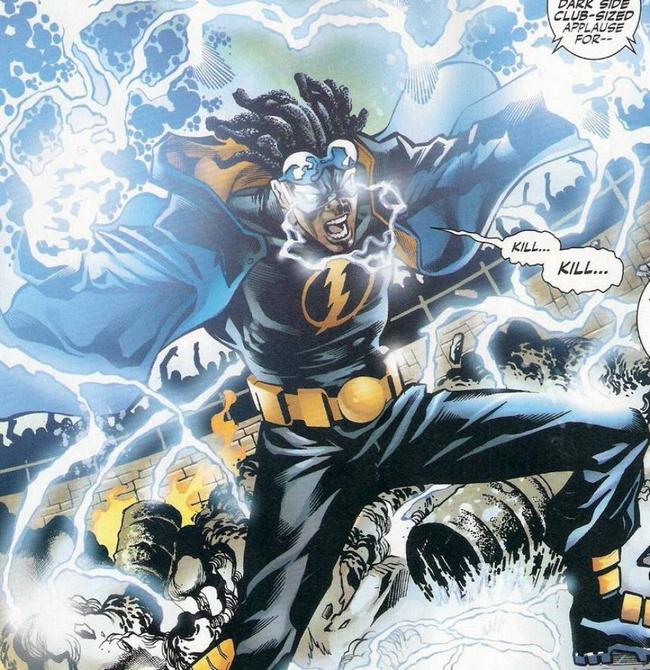 Virgil comes on the scene in his own series, Static #1 in 1993, and is trying to get revenge on a bully when caught in the Big Bang. This event, which empowered many of Dakota’s young people, gave him mastery over electromagnetic forces, allowing him to become one of his city’s major superheroes and defenses against the metahuman threat created by the Big Bang. After the synthesis of the Dakotaverse with the mainline DC Universe, Virgil would find himself at the mercy of the Dark Side Club around the events of Final Crisis and was later rescued by the Teen Titans, eventually becoming a member. As a Titan, he helped with many adventures, even travelling to Dakota to help quell a metahuman threat. As of the New 52, he had a short lived solo series that featured his exploits as a S.T.A.R. Labs intern in New York City, and it was revealed that he helped design Tim Drake and Bart Allen’s costumes.

While he existed for a few years before his animated series, Virgil came to the awareness of many of us through the cartoon. Here is where he gave us a shock as a young Black superhero, something etched into many of our minds to this day. His presence is important to many Black nerds, and it is common to see us wax nostalgic about him and his series. So, for me to eventually discover that he was originally a comic book character and to see him in the pages of one of my all-time favorite series, Teen Titans, was a feeling I’ll never forget. At 12, I didn’t know how to fully capture what made Virgil special for me, but I can tell you it was rare for me to miss an episode. Years later, as an adult, I can describe what makes Virgil important for me, but also many of us who watched Static Shock as Black youngsters.

Virgil holds the spirit of many of us who are Black and nerdy. A lover of superheroes and video games, Virgil asserts himself as someone who enjoys both the cape and the creature, dabbling in things like Pokemon and comic books. Summed up in one young Black man are many of our own experiences, whether the joy of consuming media we loved to things like bullying from peers. Virgil is a vastly important character because he was real for many of us and he struggled with a lot of similar issues. He represented many of us as someone who did the things we did and existed beyond reductive stereotypes of Black youth. 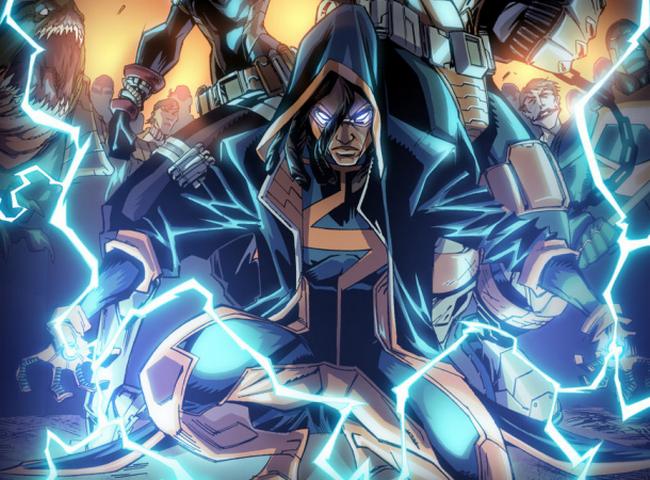 Beyond being a realistic reflection of life for many Black nerds, Virgil’s aptitude for science cements him as a profound and vital character in comic books. His relationship with STEM field and activities showcase the reality that many Black kids are into and good at science and technology, but not many of them are given a fair chance at pursuing these fields. From lack of resources in schools to institutional racism, there are barriers placed in many Black kids’ way. Essentially, when you put Black kids in jail, restrict their resources, and offer more opportunities to White kids, you set up a dubious narrative and reality that makes perpetuates vicious cycles of racism. For this reason, I’m happy that Virgil exists as a young Black man exposed to crime and gang activity but who is also brilliant. He could be the character that helps someone realize their potential beyond what society would have them believe.

Sometimes, without an example or a model, people may not see themselves in a particular field. Such a reality is extant in STEM education, as the number of Black men dwindles as individuals reach higher level courses in both high school and college. Thus, Virgil is immensely important for helping young Black men gain access to a world that was not always explicitly flor them, helping them develop a sense of efficacy that enables their success. The New 52 Static Shock run made this relationship much more digestible, as Virgil was front and center, handling a metahuman threat while maintaining his relationship with S.T.A.R. Labs.

Black men are graduating at significantly lower rates compared to Black women, one of the largest growing groups of college graduates, leading to a dire need to enhance representation of Black men as graduates and scholars. Virgil could help to remedy this disparity because of his presence as a young Black man who is proficient and engaged with STEM fields, offering a semblance of someone who looks and feels like Black men and who is also interested in science. He also represents the presence of Blackness in these professions and that many of us do have the capabilities, they just may not be recognized by a racist society. 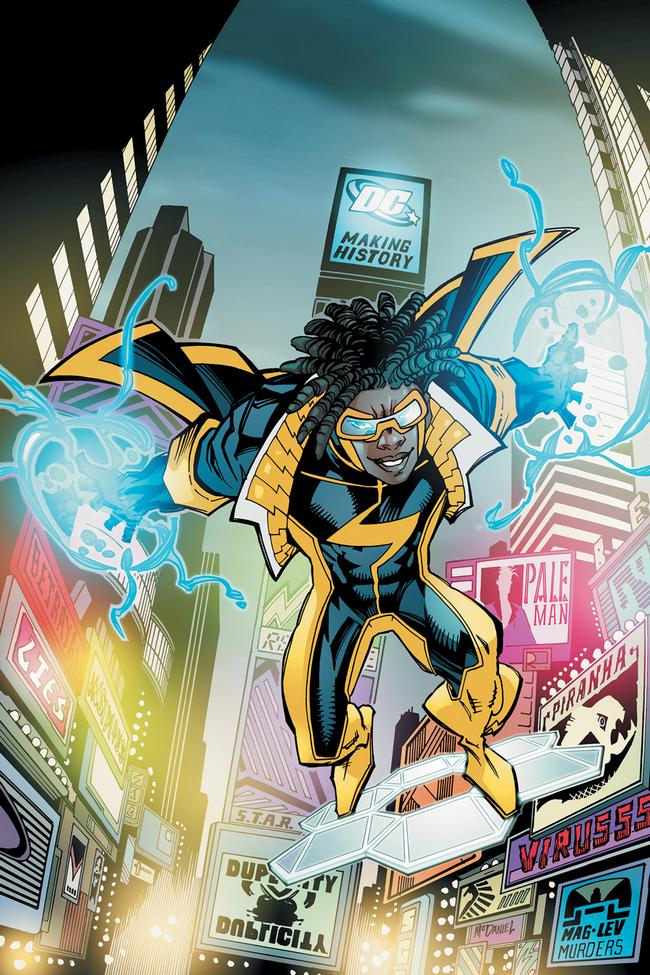 Virgil is and has been a crucial character since his introduction in 1993. When writing this article, I stopped to think about young Black heroes and realized he’s one of the very few. So, how lucky are many of us to have grown up with someone like him, close to us in age and experiencing some of the same struggles. His involvement in science emboldens his importance, as he feels real, but also reminds us that we don’t have to stick to the limits set before us by a society that is not dedicated to seeing young Black people succeed. Imagine the power of seeing a superhero who feels like you, acts like you, and explores part of a world that you may feel you don’t have access to. Then, consider that Virgil was for many of us a doorway into feeling that we could be heroes, excelling in fields dominated by other faces, and simply existing and thriving in a world despite barriers actively being placed in our way.

What are your thoughts about Virgil? What does he do to expand representation of young Black men in comics? Give me a sign on Twitter at @80Grey and give yourself the pleasure of reading through the Representation and Health 101 column!