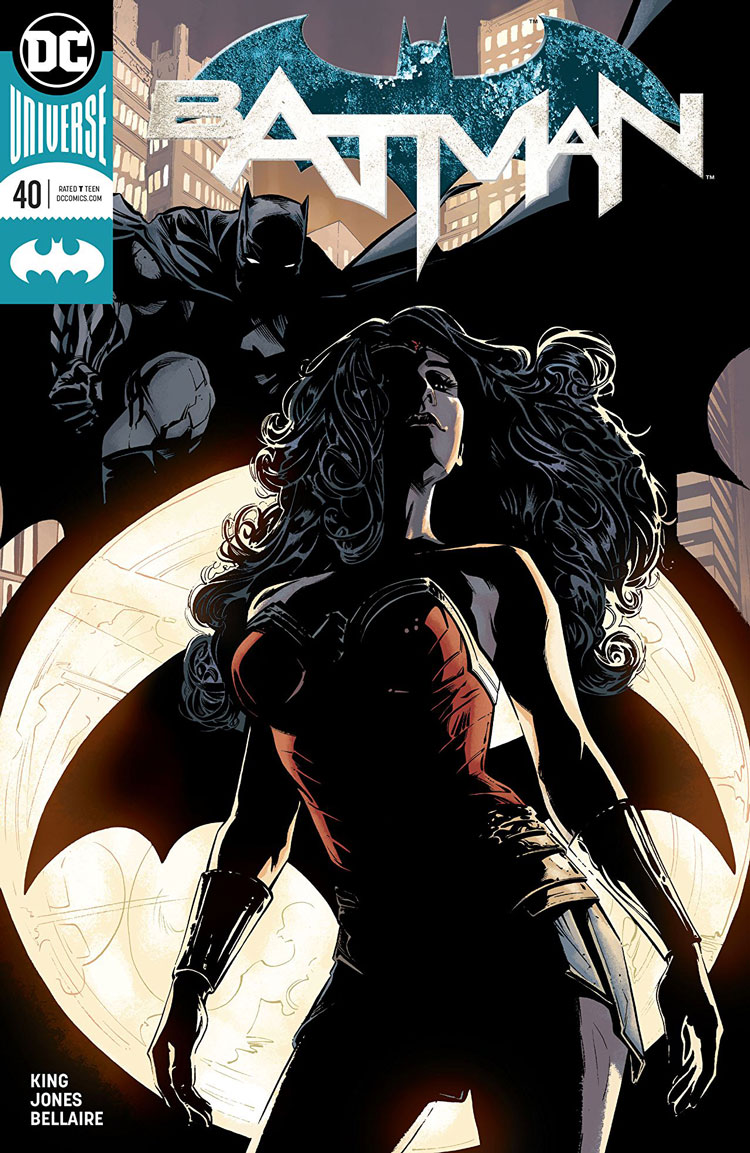 The Gentle Man has traded places with Batman and Wonder Woman for a well-earned rest from eternal fighting in another realm. For one night. One night in Gotham that translates into decades for the Dark Knight and the Amazon Princess. It’s up to Catwoman to return her fiancé and his friend to the real world, even if it means stepping on the reunion between a warrior and his wife.

Out of the gate, it’s worth noting that I don’t love the set-up here. On a meta-level, putting Wonder Woman in the character role of the “will they or won’t they” spoiler of the Bat-Cat engagement — particularly after having been used for the same purpose with Superman many years back — is troubling. King’s choice was not a good one, even if, as it turns out, his handling of Wonder Woman’s in-narrative reaction was pretty much what I was hoping for.

As much as I gristled at the voice King was channeling for Diana in Batman #39, that off-ness seems to have evened out in issue #40, with Wonder Woman delivering some of the best lines of the chapter — almost relegating Bruce to a bit player in his own title.

I might argue that just means King understands Wonder Woman. Because honestly? Who can hold a candle?

Luckily, he and Jones definitively answer that query with a particularly nuanced take on Selina that makes the entire story shine — and elevates the question of marriage, and what it really means, to the forefront.

“Is that how marriage works? I thought it was… something different.”

These words from Selina Kyle — to the Gentle Man, who lives apart from his wife in order to defend an entire dimension — illuminates something for this title that hasn’t been a focus yet. Frankly, her point of view.

Yes, I get that the book is titled Batman. And believe you me, if this wedding is to go forward on July 4 (and even if it isn’t), the need for a Catwoman title is great — if only to exhibit some awareness of what marriage is and isn’t for these characters.

This summer is my twentieth anniversary with my husband. It is a marriage of equals, not because we are both men, both professionals employed full-time, or both without the obligations of a child. It is a marriage of equals because I don’t know that I can understand marriage in any other way. That doesn’t mean we both get the same spotlight in the same moments. It doesn’t mean we can’t work together for one’s benefit over the other for a period of time.

Marriages are, hopefully, long things, with curve balls thrown and sacrifices you thought you’d never make, but some seem surprisingly easy when faced with them later on. And there are the moments you never want to face, but you face them together, even if physically apart or coming from irreconcilable points of view. Because there’s a higher value that makes the little things, the expectations and social standards, unimportant by contrast.

There is no one way a marriage works, and it’s likely in this moment that neither the Bat nor the Cat have any idea how beyond what we see on TV or glamorize in fairy tales. Selina grew up in an orphanage. And in a way, so did Bruce — an orphanage of one. For all their studies, for all their friendships, there is a lot for both to learn about how to make the kind of commitment marriage requires work.

And this is the first I’ve truly seen King bring that to the surface. Hopefully, it’s just the beginning of that exploration.

We hear this line from Selina, and it’s startlingly astute. It reads immediately like a snarky line to speak to what she imagines being stranded for 37 years with a literal goddess was like, how the situation worked its way against Bruce’s commitment to her.

But it strikes me as a lot more than that. It strikes me as one of the key tenets of marriage, its secret if there is one. Try harder. That’s what you’re signing up for when you exchange rings or smash the glass or sign the papers at the courthouse. Marriage means you try harder for each other, individually and for the combination of your persons as well. And none of those three recipients of your effort means more than any other, in the aggregate, even if one or two may take precedence in the moment.

It’s a lot to extract from a 20-page comic, I get that. But in some ways, it’s just the tip of the iceberg, especially given the care and depth of emotion Joelle Jones is bringing to each and every panel. The artist is doing something I daresay no other penciller on King’s run of Batman has done — she’s raising Selina’s emotions to the surface of her skin, even as she shows how deeply buried they are for Bruce.

Every artist to take on the title in recent months — Mikel Janin, Clay Mann, David Finch, Mitch Gerads, and Lee Weeks — has delivered a gorgeous Selina. She enraptures every one that comes into contact with her, truly. And Jones unquestionably does the same. But with the latter, I see a more complex vision of the woman the Batman wants to marry, a woman who is just as flawed as the man who desires her, and just as strong.

If the entire run of King’s Batman has been in some ways about the fear of death in the Caped Crusader, Catwoman needs to be more than a prop in a play for that fear to have meaning in terms of the commitment Bruce is about to make. And Jones completes that evolution of Selina’s character. Her strength of line, particularly in Selina’s eyes in the moments where she expresses doubt or certainty, utterly makes the difference between King’s intentions getting lost and getting fulfilled. Selina’s gaze, even when not speaking, belays a deep sense of thought, a realization of the more crushing meaning behind what they choose to do.

It’s crucial, the work Joelle Jones is doing. And it’s part of what has given me hope for the Bat and Cat that I’m not sure I had before.

There’s a lot more I could opine on, from the silly moments about Ace and Jumpa (!!) to the most appropriate reaction to Bruce’s weakness Diana could possibly give, but at its root, Batman #40 jumpstarts a ton of questions and ponderings about marriage — and its place in Bruce and Selina’s journey — that feel like they take the series to the next level. Next time, just don’t pop Diana into the center of it. She deserves more than to be that tool for a narrative.