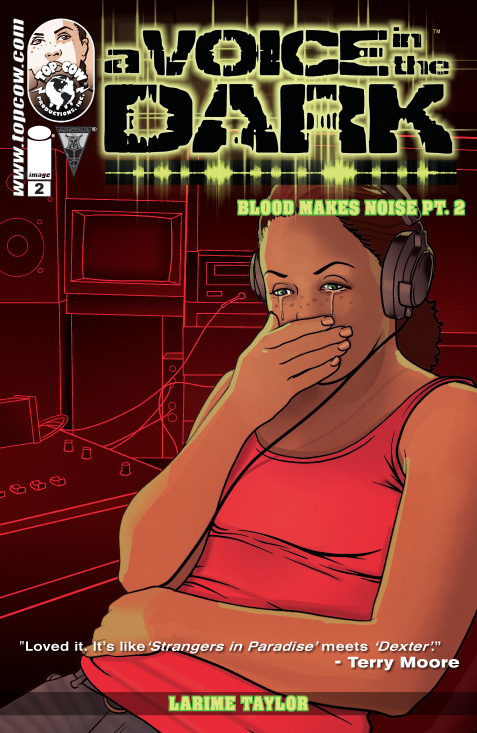 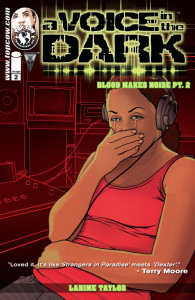 Author and illustrator Larime Taylor continues to lead us down a dark path of self-examination with “Blood Makes Noise, Part 2.” While part 1 of this story dealt primarily with murder and homicidal tendencies, this issue is centered around suicide and the axes of oppression which can ultimately drive one to it. This issue hit home on a personal note, as I deal with suicidal thoughts on a day-to-day basis. It’s a deeply intrapersonal existence, because individuals living with suicidal tendencies spend the majority of their waking life debating the pros and cons of “sticking around.”

In this issue, we find the protagonist Zoey Aarons reflecting on a recent incident involving a suicidal high school student calling into her college radio program. While works of fiction have a tendency to sensationalize suicide by depicting characters who take their own life in a dramatic (and often public) fashion, I appreciate the fact Taylor gave us something a bit more simplistic—someone in the privacy of their own home, just waiting for the “right” moment to end everything. What is even better is Taylor provides his audience with critically important information on how to react, speak to and help a person in suicidal crisis properly. More often than not, acquaintances and loved ones will react to someone prepared to take their own life with anger, victim-blaming and poor listening skills. These are some of the easiest ways to push someone over the edge, and loved ones in particular rarely examine their own behavior to see if they are in any way contributing to someone’s thoughts of suicide. This does not mean everyone with suicidal thoughts is a perfectly innocent soul, but pointing out an individuals shortcomings or berating them while they are in crisis is completely irresponsible.

Another benefit to the narrative of this story is seeing how cycles of abuse form. “Learned behavior” is a common phrase found in this issue because it’s important to understand how individuals can internalize abuse and in turn, become abusers themselves. Obviously, being a victim of abuse is never an excuse to abuse others, but learning to recognize the signs in others and in ourselves can be a preventative measure.

Ultimately, this issue can be described as a massive trigger warning, but one well worth the read if you are able to do so from a safe place mentally. I recommend it not only for its impressive writing, but for anyone interested in suicide prevention.