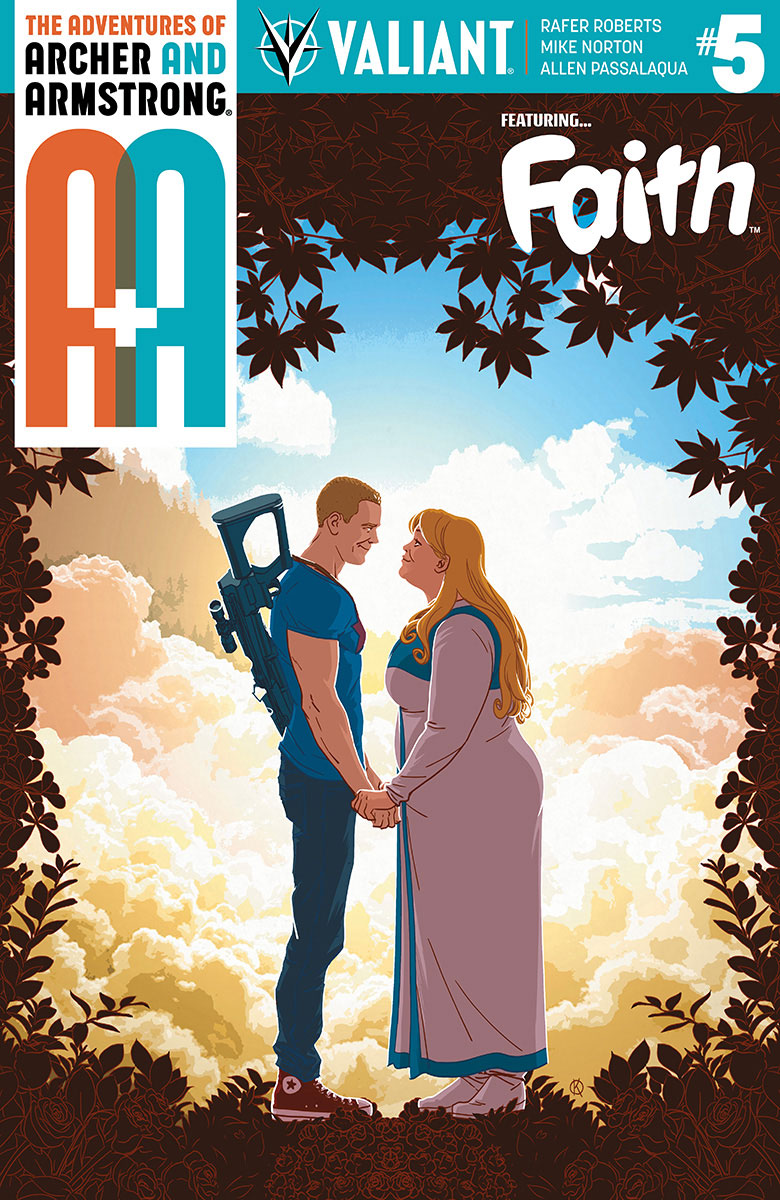 Mike Norton stops by to draw the mirth and merriment of Obadiah Archer’s first date with Faith Herbert in A & A: The Adventures of Archer & Armstrong #5. “Mister Armstrong” is present for the first and last scenes of the issue, but writer Rafer Roberts is given the bulk of the issue to focus on the budding romance between Archer and Faith.

In Norton, Roberts has an incredibly reliable collaborator who is one of the modern masters of comics today. In the span of this issue, Norton draws a wood-paneled station wagon (masterfully colored 1970s aquamarine by Allen Passalaqua), a restaurant scene filled with Hollywood lookalikes, a band of sharks inspired by Katy Perry’s Super Bowl XLIX backup dancers, and a humorously romantic and romantically humorous adorable kiss that gets picture perfect treatment from Passalaqua to compliment everything Norton pours into it. Dave Sharpe joins in the fun, adding emojis into the text chat that sets up the specifics of the date and describes the characters’ mindsets to the readers in a lighthearted manner.

Norton might be the very best character director in comics – his ability to direct the characters throughout the comic is worthy of study and should be offered as a master’s class. From the shaky hovering of Archer’s thumb as he musters up the nerve to call Faith to the subtle looks the characters share throughout A & A: The Adventures of Archer & Armstrong #5, every single panel tells a story. That alone shouldn’t be an achievement, but the smooth grace Norton packs into the sharp, crisp lines he uses makes this comic book a visual treat.

Of course it certainly helps that Roberts has embedded two very human characters in this comic. Everyone has been in one of the two characters’ shoes – thrilled beyond words to find the courage to make the call or speak the words, regardless of the full result. Roberts keeps this an Archer & Armstrong comic from cover to cover, however, as he finds a way to humorously threaten date night. As weirdness descends upon the date, Roberts keeps the humans at the center of it all, despite their powers and abilities. The personalities are what truly sell this story, making it entertaining, adorable, and thoroughly enjoyable. Their dialog before, after, and during the skirmish is believable, despite the utter absurdity of their situation. The date sounds like a date, the fight sounds like a date interrupted. All of it reads like some of the most enjoyable, human comics you’re going to find this summer.

I forget the attribution, but recently I heard the perfect comic book story should include equal parts suspense, action, adventure, romance, and comedy. I’m pretty sure Roberts was not the individual at the heart of that attribution, but he sure hits all of those points. With an all aces crew of Norton, Passalaqua, and Sharpe joining him, A & A: The Adventures of Archer & Armstrong #5 is a comic that is not to be missed. This is the type of relatable escapism so many of us read comics to enjoy. I just hope we get a little bit more from this creative team. This is a comic worth loving.