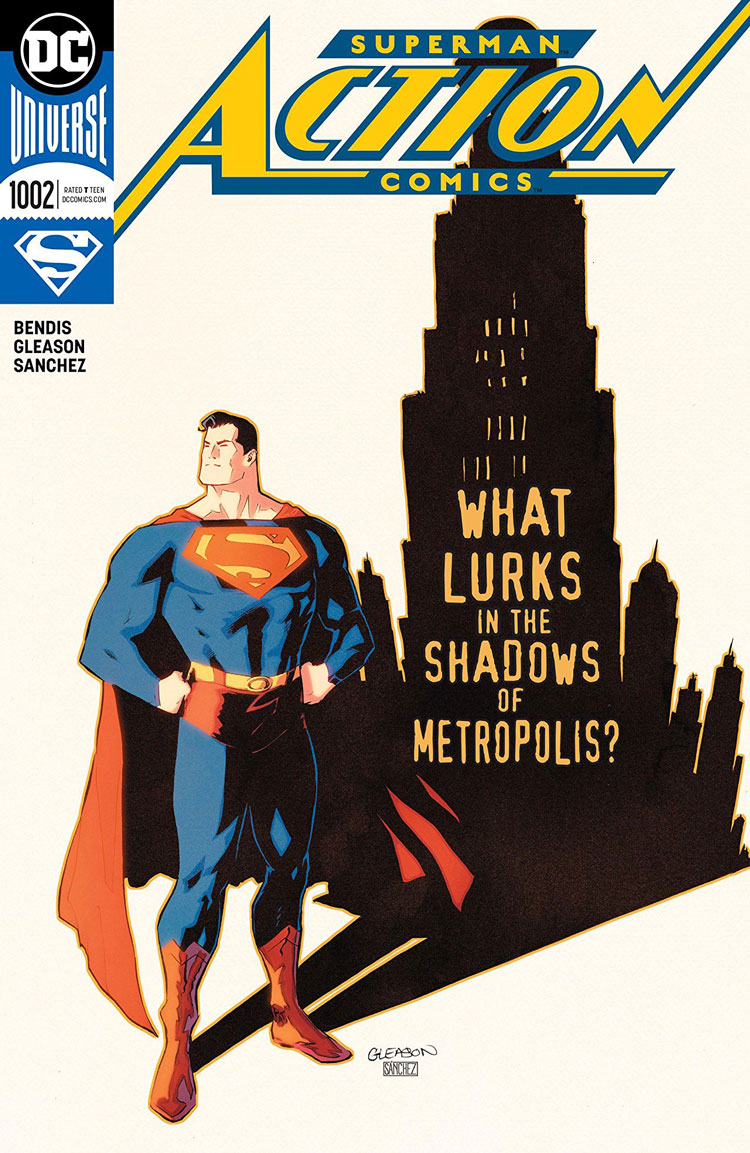 Action Comics continues onward with the “Invisible Mafia” storyline with more twists, turns, and surprises as Metropolis gets a rude awakening with the crime spree that makes Superman out to be the big bad in all this. Starting off the issue with a typical Superman styled entrance with his own spin on it, Bendis layers out the ongoing problem that’s happening in Metropolis. The scene has humor with the grave misunderstanding that quickly follows the tired and true Superman saying. Gleason spreads out the bystanders and citizen’s reactions with the approaching person falling. It’s short and to the point and is the catalyst for Superman to get to the bottom of the mystery plaguing his city.

Bendis finds a home at the Daily Planet with a different kind of cast for Action Comics. Gleason and Sanchez make the conversations at the Daily Planet feel fully realized with the amount of detail that goes into the characters expressions, backgrounds chock full to populate the location of the newsroom, and panels that focus in on each character as conversations continue that allows us to get wind of the current happenings of the story. Gleason’s pencils are impactful with how they inject personality into each and every character and the portrayals of them. Miss Goode and Perry White come to verbal blows over the progressing Superman story and if the real Boy Scout is behind it. The focus on how the stories Clark is tasked to investigate reflect back onto Superman’s world in quite a few ways. There’s some mystery to Robinson Goode with not only being another reporter at the Daily Planet but appears to have it out for Superman in particular. That’s just one of the wheels that Bendis continues to turn in Action Comics with his ground floor approach to Superman’s World. This approach of showing what the underbelly of Metropolis is doing to demolish Superman’s reputation lets Bendis explore some realms that he’s been known to call home. Moments with the Mob really let Gleason and Sanchez play with their respective art duties to great results. Darker inks from Sanchez make the brighter colors in the background all the more appealing coupled with Gleason playing with the angling of panels and a sequence that involves a long underused Hero triumphantly returning to the pages with Sanchez’s dashing away all of the darkness for the page introducing the grizzled Hero back into the fray. Gleason doesn’t stop there with another mesmerizing image of this arc’s main villain with the lettering from Reed, setting off how the Red Cloud comes across on the page.

The world of Action Comics under Bendis is an interesting place to read on in this issue. Keeping the Superman sightings to a few pages and instead focusing on Clark Kent’s investigative roots and those around him is a good counter for the “Superman” title that includes and focuses on Superman’s place in the DC Universe at large. Action Comics is riddled with exploring nooks, crannies, and characters at large all over Metropolis. The investigation of the Mafia is growing and the body count is beginning to rise as answers lead to more questions for Clark and realizations for Superman in a scene that could be described as “seething rage” based upon what he’s learned about his city and the gangsters. Sanchez’s colors cannot be overstated about how they bring and center your attention on the Big Blue in panels that make way for him to stick out on the pages. Gleason’s pencils tell the story all their own with the looks that act in perfect reaction to Bendis and his writing.

Action Comics’ last few pages reveal incoming attacks on both halves of Superman’s world. Clark discovers some information that will no doubt turn everything we thought we knew upside down and enemies of Superman continue to plot on his downfall and this might be an attack, not even he can see coming. Bendis’s direction to focus on Metropolis as a character and her relationship with Superman has been an interesting road to go for Action Comics as we see more parts of the city the Man of Steel calls home and the growing Rogue’s Gallery within it! Playing to his strengths as far as sandboxes go, Bendis writes an intriguing tale of Superheroes without including the Hero himself but the person behind the Hero that lets Clark’s character get in the spotlight and allows for Bendis to write how characters react to Superman and what he means for the city when enemies conspire against him. Action Comics is sizing up to be the stronger of the two titles under Bendis pen and with Gleason and Sanchez illustrating a very grimy and vibrant Metropolis in the process? Action Comics seems to be in fine hands.