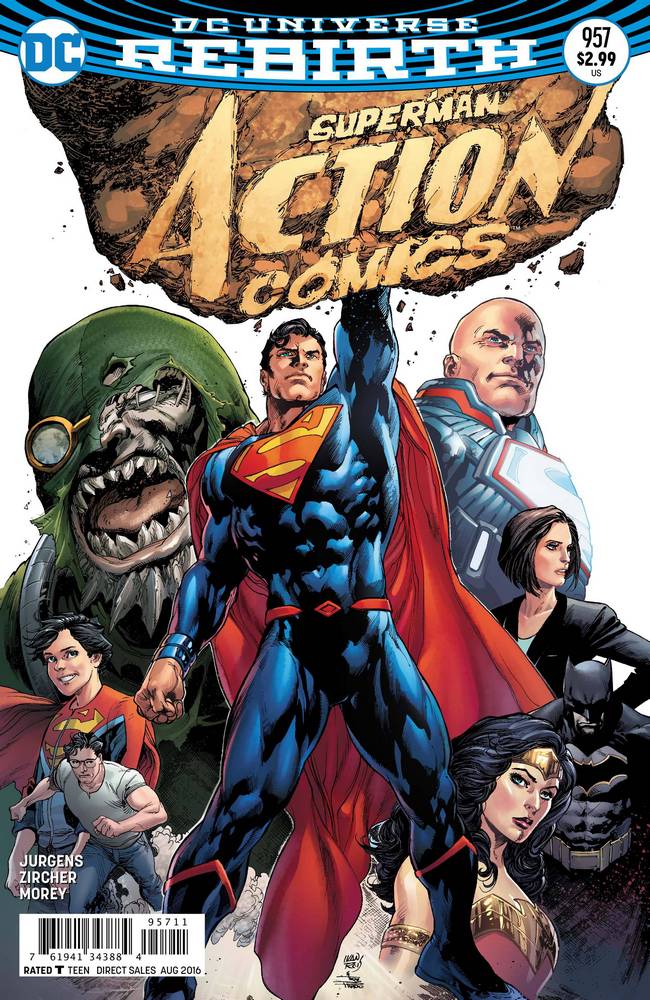 Towards the end of the New 52 run, DC Comics realized that Superman needed a boost. Dan Jurgens and Lee Weeks were given the go-ahead to do a series with the Pre-New 52 Clark Kent, his wife, Lois Lane, and their son, Jonathan, at the center of it. That series, Superman: Lois and Clark proved an audience existed for a more seasoned Superman. It also displayed evidence that readers were interested in family dynamics intersecting with super heroics.

Then DC unleashed Super League, which was simply the production/solicitation name for The Final Days of Superman. An eight-part weekly saga written by Peter J. Tomasi, that story brought back the story-based numbering beloved by readers in the 1990s in chapters drawn by Doug Mahnke, Mikel Janin, Ed Benes, and Paul Pelletier.

Bits and pieces of the 1990s strung together to critical acclaim and fan support. Renewed enthusiasm for the Man of Steel, despite a lackluster silver screen appearance (or maybe inspired by the lackluster silver screen appearance?). At the heart, it wasn’t about the twists and turns of Superman being pressed through an interdimensional wringer. It wasn’t Clark Kent’s identity being released. It was, simply, the story of the “man” behind Superman and his concern for his legacy and the sake of the world he would be leaving behind.

So it’s only natural that Jurgens is given a book and Tomasi another title. Let’s see where they take us now.

Jurgens makes the most of his chance right away, packing more into the twenty pages of Action Comics #957 than would ever be comfortably covered or acknowledged in a review. Jurgens reminds readers of the supporting cast, including the city of Metropolis itself, but doesn’t bog down the pages with expository captions or burdensome dialog. After all, the best way to tell readers about a character in a comic book is to show you. Maggie Sawyer is a captain in the Metropolis Special Crimes Unit. Jimmy Olsen is a photographer for the Daily Planet and seems comfortable dealing with Sawyer. Lex Luthor envisions himself as a savior for Metropolis, taking on the mantle of the city’s fallen hero. After all, “It’s time for Metropolis to turn to one of its own.” Luthor wearing the shield and cape of Superman, claiming inspiration and encouraging others to join in him in taking up inspiration oozes self-righteousness.

All of this is done through the writing, the dialog and the setting. Artist Patrick Zircher enhances those moments, but Jurgens has polished the story so neatly that it seems as though he has crafted verbal thumbnails for Zircher to draw on top of. Zircher makes use of spotted blacks to designate shadow, drawing spider legs of hatchwork from those shadows to describe depth and shape. Every single one of his characters shares space with those around them, and each is distinctly recognizable from any angle. Strong storytelling enables Zircher freedom to manipulate camera angles, reshape panel borders and generate energy in the artwork, regardless of the figures actual range of motion. Zircher’s art is more grounded in realistic depictions than Jurgens would be, despite the heavy use of shadow, but the output becomes an interesting and inspired choice for this comic book, especially under colorist Tomeu Morey’s choices.

Morey’s decision to heavily employ earthy tones and duller shades mute the opening scene, making Action Comics #957 appear to be more of a crime book than a superhero comic starring the original super-powered American icon. He switches up to subtle pastels as Luthor hovers above the conveniently captive audience at the scene of the bank robbery that opens Action Comics #957. When Superman confronts Luthor, the color palette takes on more primary hues; somewhat less saturated that on the cover or on the page where Superman flies away from his farm.

There’s plenty to like in Action Comics #957. The script between characters is solid, albeit a bit prescriptive as Lois explains to Jonathan how he should use his powers and when it is or isn’t OK to use them. There are a couple bobbles, as one of the gunmen declares, “He broke my ribs!” during the actual fight, and some of the crowd noise seems sparse, almost as though it’d be better left out.

Those are minor quibbles, as the opening chapter of “Path of Doom” showcases a new perspective on Metropolis, Superman, Lex Luthor, and, as shown on the cover, Doomsday. Metropolis is sleek and shiny, with buildings constructed for maximum sunlight penetration. That opens up Morey’s palette and plays into Zircher’s shadows nicely, especially as the opening scene and the clues come back around by the end of the issue.

With a slight cameo by the enigmatic Mr. Oz and the appearance of a surprising Superman cast member, Jurgens and crew don’t simply make this a Superman comic. This is, as the title says, an “action” comic, and there’s plenty of action and suspense. So the only thing to do is to give readers a splash page final image that’ll stick with readers long after this comic is closed. From there, those readers checking their calendars in anticipation of the next chapter titled, “ANNIHILATION!” I’m pretty darn thrilled to be able to look forward to reading a Superman comic again.