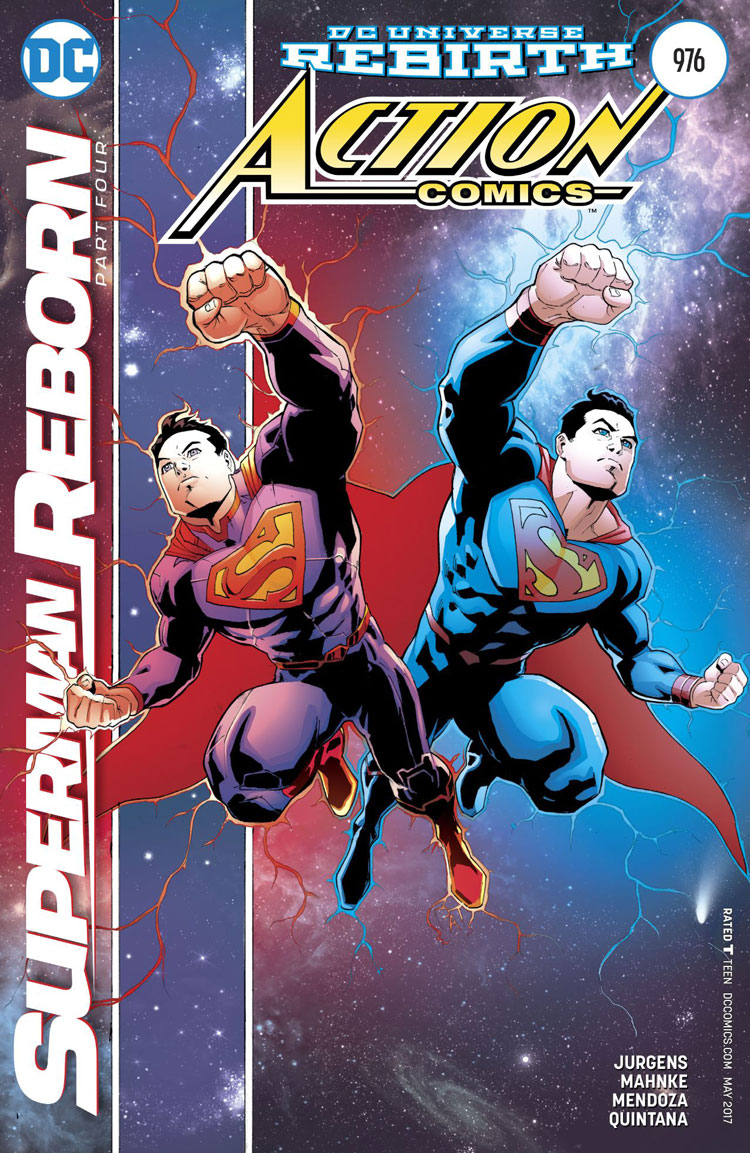 The mother of all crossovers comes crashing down around us. Through doppelgangers, identities lost and found, and long standing mysteries we’ve witnessed the adventures of Superman, Lois, and Jon in the multi-layered world of DC Rebirth that’s still trying to figure itself out. Their recent adventures have been a culmination of mysteries specifically pertaining to the Superman Family of titles and while the issue answers some questions, it opens a can of worms for the entire DC Universe going forward and the Superman Reborn Aftermath issues to follow.

We’re reintroduced to an old friend as the issue maintains the urgency and curiosity of the New 52 Kal-El and Lois Lane taking the place of the Pre-N52 versions much to Jon’s excitement and ensuing confusing seeing as how he believes he has his parents truly back. Jurgens doesn’t miss a beat with New 52 Kal, he’s angry, confused, and ready to punch Mr. Mxyzptlk before the entire area is erased. Mr. Mxyzptlk plays with the cards he’s been dealt while letting on he’s been viewing events from a higher plane citing what’s happened now that New 52 Kal is here in Jon’s Dad place.

As always, Mahnke gives us the facial expression and body versatility we’ve come to expect from the long time Green Lantern artist. From the grimacing Mxyzptlk enlarging himself to pester Superman, Jon’s distraught face trying to convince Superman and Lois are his parents, to the flows of energy and deconstruction of everything around them. Quintana’s colors are a sight to behold as the background is growing all but a nonexistent white and we see Jon man one last assault against a transparent Mxyzptlk urging to Jon join him so they can disappear before someone notices. In a theme that both Tomasi and Jurgens have built since the start of the Superman Rebirth era, Superman is about family. Jon has slowly come into his own right and being the conduit that ties together both versions of Superman and Lois highlights his role thus far in the Reborn Crossover specifically. He guides the two back to a sense of familiarity before the issue gets turned on it’s head in a glorious single page.

From here on out is where things become old and new again. Mr. Oz narrates the remaining pages, expanding and closing the connections on the nature of Superman Reborn that began in Part One. It’s here in an explosion of red, blue, and white we’re treated to a splash page for the ages as the entire art team puts their all into displaying the history of Clark Kent and Lois Lane. Mahnke unveils the new outfit for Superman in all of his smiling and shining glory. The warmth has been rejuvenated to the pages and it feels as if one phase of the Superman Story is over as another one continues to play out. Mr. Oz questions the very ability of Superman and this seemingly insurmountable feat, to repair what was once broken. The ramifications are about as game changing as you can get, the aftermath will be seen far and wide…and for good reason because the effects of the crossover add to the timeline questions Rebirth setup in the one-shot last year.

Superman Reborn is acted as a simple continuation of stories and a launch pad for the next set of stories that Superman and his family will be going through in the next few months. A tightly wound event between two titles with tie-ins exploring their own stake in the game. The finale only had a few ways it could naturally end and to see the most logical (and guessed!) ending play out while wearing it’s heart on it’s sleeves racked with emotion and love for the character and his long history is a fantastic sight. The writers and artists deserve a pat on the back for reaching the finish line with not one hair nor panel out of place. Superman Reborn has not only restored the titular character and his status but also keeps those surrounding him with an invigorated playground that is the DCU Rebirth landscape.