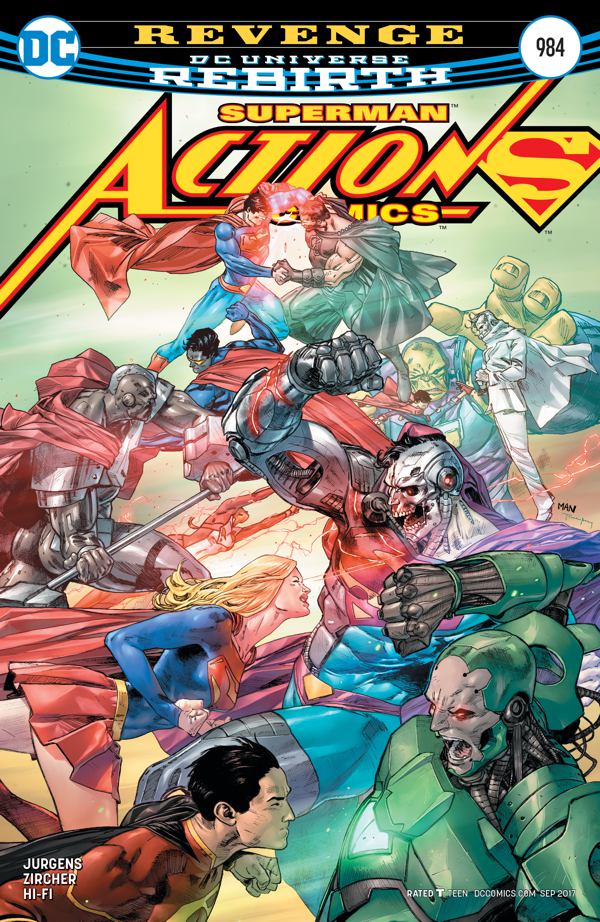 The finale to Revenge is finally upon us and Superman’s world and those around him continue to change as Zod’s power play in the Fortress of Solitude comes to a head.

Jurgens immediately sets everyone on the table for a thrilling finale and that includes cleaning up a smaller cliffhanger from last issue concerning Lois, Jon, and Krypto. Stuck inside the Fortress with Zod and the Revenge Squad, Lois and Jon are discovered to have sent the decoy ships that Zod destroyed previously. This sets the Heroes up for a comeback because the rest of the Superman Family, save for Supergirl who’s in the hands of Zod, are trapped inside the Phantom Zone with Eradicator and Cyborg Superman!

Revenge has kept the focus on the clashing villains since the first chapter of the arc and while we started with Cyborg Superman gradually adding villains to his plan to destroy the Man of Steel…the story has quickly revolved around General Zod and his true scheme that finally unfolds in the pages of this book. Zod escalating as the star of the arc displays why he’s a force to be reckoned with even when Mongul is standing in the room as well. Jurgens does a good job of balancing Superman and the rest of his family trapped alongside him in the Phantom Zone. A standing issue of Superman gets resolved as a double dip into weird energies restores his sight, a minor annoyance during the story arc that was a factor for the Superman Family to unite.

With his sight restored, Hi-Fi lets loose with the unorthodox and weirdness of the Phantom Zone and the colors begin to shift to more neutral colors rendering all of the Super characters more muted. It doesn’t take long for things to boil down into a conflict on both sides as Zod’s true goal begins to take shape and he asserts his dominance over the rest of the Revenge Squad as he sees fit. He makes quick work of the group and shows why he’s a top tier villain for Superman in the process. A surprise attack from Jon disrupts his plans and Jurgens does what keeps Action Comics an exciting read biweekly, plots near future story arcs into the background of the current one. A voice that is revealed as Mr. Oz guides Jon as he attacks Zod and helps Supergirl regain her strength and this potentially tells us some things about Mr. Oz and his connections to the Superman Line. Mr. Oz is familiar with Kryptonian technology to a point that he knows how the Battle Suit that Jon operates works inside and out. He has Jon’s “best interests” at heart and given what we’ve seen of Oz it’s not entirely farfetched that he’d want to keep people close to Superman safe.

The battle rages on both fronts as the Phantom Zone team and the Fortress of Solitude clash as Zod’s master plan to get his army out of the Phantom Zone comes to fruition and Leigh’s letters provide the correct amount large scale bombastic punches and sounds to go with along with these characters. Zircher keeps up his work from earlier in the arc and gets to unleash a little bit more as the finale to an arc calls for more action oriented scenes. He does better with displaying characters in motion as his art shows characters reacting to movement or standing in place. Hi-Fi has brightened every panel and corner of this comic and it makes every one of the heroes and villains remain distinct through all of the madness and makes full use of different angles and sizes for the panels given what’s going on in the pages.

Jurgens brings some Kryptonian characters back into the fold that accomplish Zod’s goals and provide a Rebirth worthy fresh start for the character there’s no rest for the Superman Clan because Mr. Oz is on the horizon and his connection to the Superman Line and Zod’s newfound place in the DCU will provide ample stories opportunities as the ending exclaims it’s a “Beginning”. Revenge culminates with a finale that sets the stage for what’s to come, establishes new threats in the form of an appropriate revenge of General Zod and looks good in the process. Action Comics doesn’t dive heavily into the fighting and spotlighted villains as much as some would like, it makes up for interactions among the cast, the action from beginning to end, and the consistent art team.