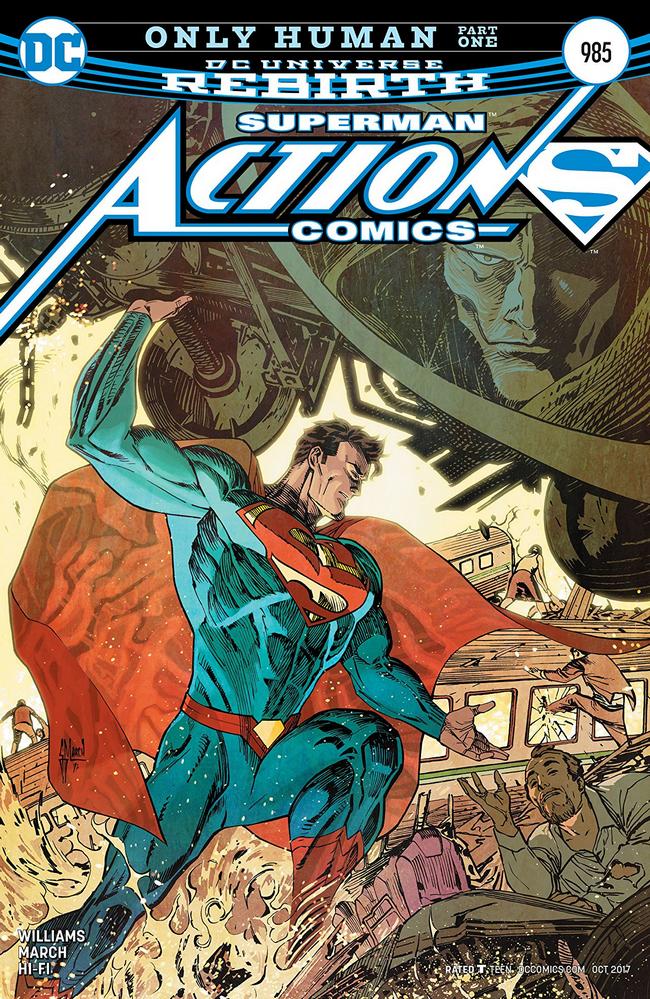 We’re treated to a special guest star arc of Action Comics with Rob Williams writing and Guillem March on pencils to bring us a tale of two Supermen with Kal-El and Lex Luthor.

Williams begins the story with a business as usual adventure for Superman, involving lifting a Submarine out of the seafloor and to safety. Sticking with the family emphasis in the new Superman age we focus in on Lois and Jon who are worried about their recent string of events that go back to Superman Reborn and since then have the Super Family facing incredible threats in a row. Kal feels optimistic as he chats with his family on his way to the next threat. The last few issues of Action featured the Super Family in one of their biggest threats in the form of the Superman Revenge Squad so Williams charting an adventure that’s not too grand and encompassing is a nice breather for Action Comics.

We get to the threat of the issue quickly and Superman analyzes and breaks down what’s happening which leads him to a villain we haven’t seen in a long time. March delivers more of a widescreen and angular panels to give us more interesting panels throughout. His Superman is more built and appears more daunting with shadowed lines over his suit as he gets aggressive against The Machinist and his attack on the small town via chips from a very close and personal source to the Superman World. LexCorp is to blame and Superman is none too pleased about it. SuperLex is the voice of the issue as he digs deep into what he thinks of Superman and it’s right on par with how Lex has been written in Rebirth and other titles. Lex still holds Superman accountable for being an alien and believing he thinks that Superman is above the rest of humanity. Lex is still the same person we’ve always known him to be, he’s just aligned his priorities to more heroic efforts and it shines in Williams writing of him. From there it’s a team up of Super proportions as Lex wants to rectify the situation since it’s his tech on the line and being used for evil.

The rest of the comic is the actual team up of Superman and Lex and it’s here March’s art shines with the action taking over and being expressed in the explosions that throw off the panels themselves. It’s not long before their common enemy reveals himself with backup that can make the second installment a more harrowing chapter as this first chapter sets the table for a technology infused battle of the Supermen!

With this guest arc giving us a different artist than our normal rotation, we’re given a sense of March’s art and it travels the line of working for the title and not in some regards. During the action scenes his muscular and widescreen approach to displaying what’s happening on the page, it fits the title perfectly. In other instances it does make for awkward body positions and characters appearing larger than they are as we maintain a close camera style on them. March handles the characters range of emotions well, using shadowed lines to reinforce the grimness of the scene similar to a terrifying moment in the manga. Hi-Fi’s colors continue to be a mainstay on Action Comics, perfectly suiting the scenes throughout matching the right amount of red and blue from our two heroes and Leigh’s letters get to work their magic with plenty of panels that cause for bold and explosive letters to scatter the page.

The guest arc for Action Comics has a fairly light start to another Superman and SuperLex team up and while the art has it’s muddled spots, Williams maintaining the characterization we’ve come to know of these two Supermen, giving Lex Luthor his own spotlight of sorts as the voice of the arc gives you an okay start to look forward to.