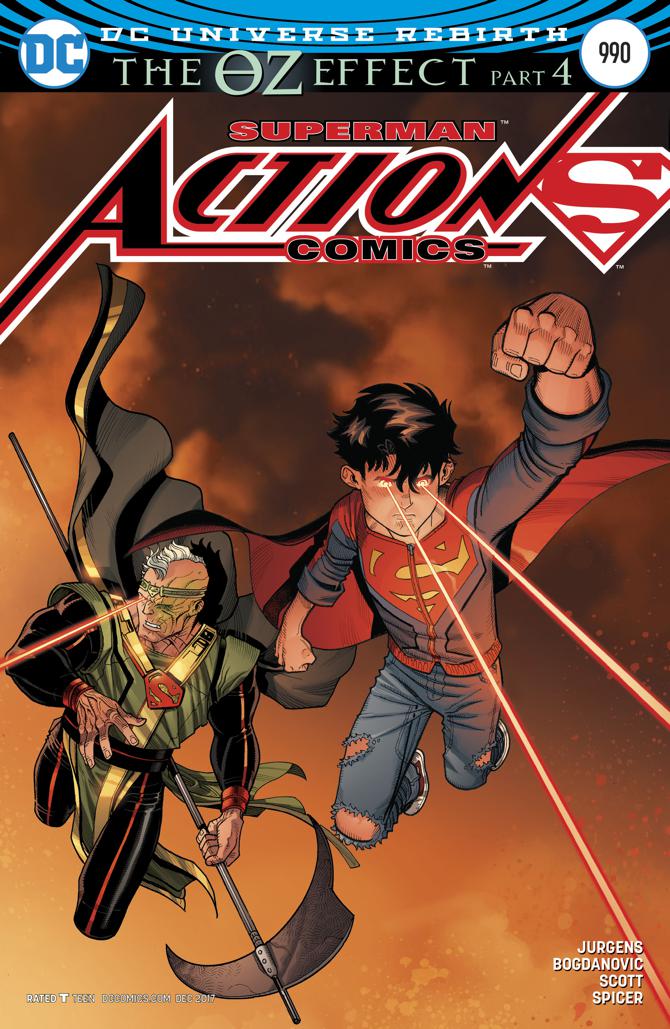 The Oz Effect steadily increases the global stakes and personal crisis that the Superman Family is facing, and the threat is more near and dear to them than either Lois or Clark can handle. It’s a family divided, a world coming apart at the seams, and Jon might be seeing things differently than his parents!

Superman continues his global crusade of preventing the world from falling into more madness as the reign of Oz’s supporters continuously wreck havoc all over the world and the opening monologue with exhilarating pencils from Bogdanovic capturing the boy scout flying headfirst into the next dangerous city going experiencing retaliation, death, and decay. We’re told all over the world different superheroes are handling many threats everywhere and Superman is doing his part on an international level right along with them. Jurgens writes a more lofty Kal-El as his sense of purpose is being caused into question because everything he’s fought for, for decades is coming undone because humanity has truly lost it’s collective mind in the name of Oz. Spicer’s colors capture the disastrous scenes well, never drifting too far from Superman and his red and blue outfit and keeping the action centered around him even when he’s surrounded by chemical weapons saving the day and it doesn’t stop there.

Jurgens keeps the energy of Superman’s quest tightly wound as he progresses across different locales maintaining the red blur trailing behind his cape showing his speed and urgency as he forcefully plays interference for two officers that can help put a stop to the violence ravaging their land and the neighbouring zones. The Oz Effect has tested Superman’s faith in humanity like never before and Jurgens and Bogdanovic capture the voice and emotional range of a man meant to protect humanity but is growing on edge because of the long planning actions of Jor-El. Bogdanovic gets the rage and sympathetic Superman within panels of each other and the inking from Scott and Hanna outline Superman well against the peaceful backgrounds as he tries to get the men to listen to reason.

Meanwhile, the more pressing and immediate threat in Metropolis and the Fortress has Jurgens charting the evolving cases of Lois and Jon both in their own predicaments. Lois is sidelined for the most part but remains willed to do what she can for her family and Jon has the most interesting journey of all…getting to know his family and his grandpa brings an proposition to the table that tugs on story arcs of the Superman title that put Jon at the forefront. Jon and Jor-El get some one on one time to discuss the future of Earth and potentially another home for the Superman Family. The scene is bathed in warm colors with snapshots of a peaceful alien world despite the conversation the two family members are having. The ideals of Jon and Jor-El shine through brightly as the two go back and forth on what they believe will happen to Earth with the imminent undisclosed threat that will destroy everything with no hope of stopping it (more teasing for Doomsday Clock?).

Not leaving the well deserved action part of Action Comics behind, we’re treated to another great Superman moment of him dismantling the plans of Oz’s supporters and the sequence is heavy on the inking and coloring from the entire team and Leigh’s lettering crashes as boldly as Superman does. Bogdanovic never falter when it comes to the wide range of characters he has to draw and balances the small details with detailing humans in all types of situational moments. The coloring by Spicer ranges from various locales in both day and night and he acquaints the pages with the optimal brightness or darkness to fit the mood of said pages. Everything in this arc has maintained a steady rhythm of pushing Superman out of his comfort zone quite literally and is bringing in some of the most basic concepts of his character into action as he’s attempting to fight humanity and the thinking of his father.

Action Comics is making great strides for another Superman: Action Comics arc that pushes the envelope of the character and his family to new places. Jurgens makes connections to the beginning of his Rebirth run and finally delivering on planted seeds, gives us everything we could ask for in an issue of Action Comics. Bogdanovic is capturing the adventures nicely and makes the book worth it with his visualization of dynamic and quieter scenes. The Oz Effect is a timely story for not only Superman, but for 2017 at large and having our hero combat a world that doesn’t look far off from our own packs a layered punch to the otherwise super heroic tale.