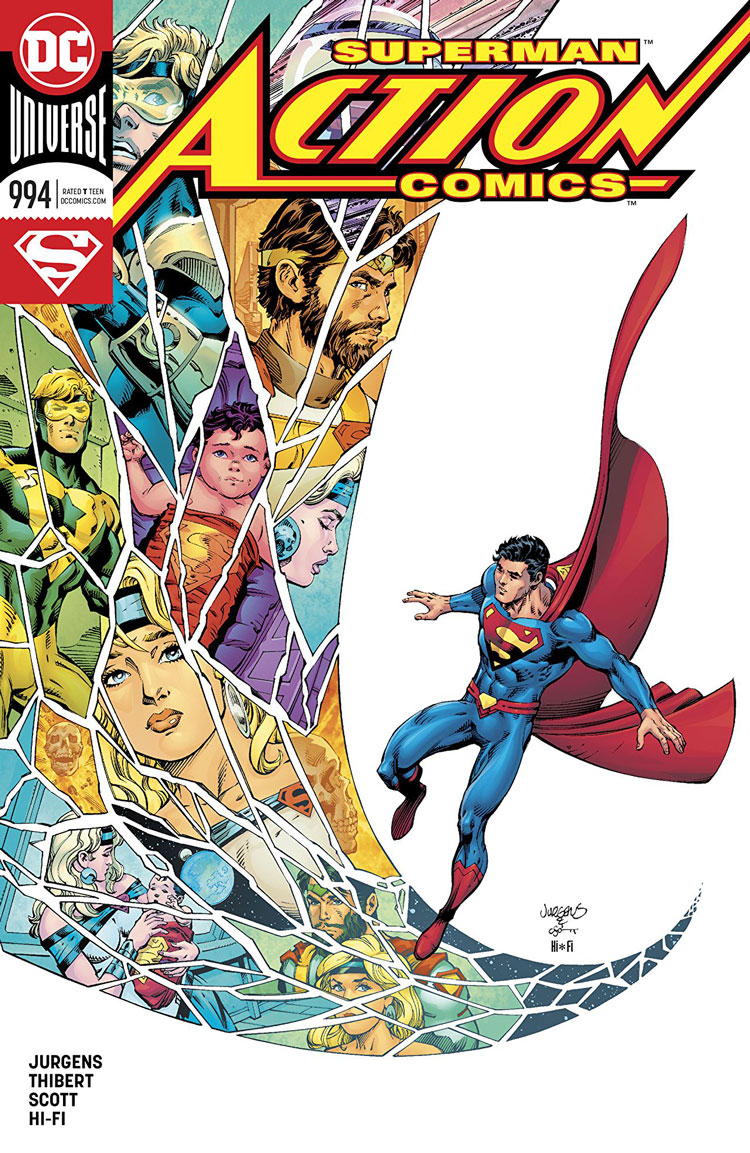 The best hero you’ll ever hear of and the greatest hero you’ve never heard of continue their adventure through Superman’s past and it’s a doozy on both Booster Gold and Superman as Krypton isn’t how anyone imagined it!

Superman and Booster are still understanding the lay of the land in this new past of Krypton. Battle suits and explosions litter the streets as the pair try to make sense of what’s going on and the magic isn’t in the new found landscape. Superman and Booster Gold feel and read write at home under Jurgens. Booster is still the dashing, time hopping superhero who takes stock of the situation they’re in and has a lot of expertise and comedy to bring along the way alongside Superman who is still more or less shell-shocked thanks to “The Oz Effect”.

There’s a lot going on plotwise as our two main characters adapt to survive in their surroundings and Leigh packs the early scenes with lettering suitable with the action. Thibert, Scott, Desjardins, and Prado do well on the inking at all points from explosive scenes that outline our two heroes and providing the dark with Hi-Fi making Booster and Superman look crisp and clean. Jurgens also continuing to provide the pencils for the arc are good and his depictions of the two are the right build and frame, giving them a classical style as they traverse from location to location.

Jurgens keeps the root of the adventure intact as Booster and Superman have it out about the carelessness of Superman and his journey. Skeets provides scientific facts and information about the type of countdown they’re on and they have some baggage on their tail in the form of Zod.

Jurgens doesn’t forget to shed light on the people in Superman’s life both good and bad in this new arc and it allows for him to balance the art that goes from Kryptonian robots and its people to the Pentagon’s office with Lois and Jon. The side plot transpiring between Lois and her father is character development in the unlikeliest of places for the Superman Family and a great way to keep them busy while Superman sorts out his new found paternal and historical pain.

Superman and Booster engage in battle with Zod’s forces and it leads them down on another path of time traveling mayhem that features a very interesting “What could have been?” for Kal-El as Booster narrates the journey through the jet stream. Booster being in the driver seat of sorts continues Jurgens push of getting us situated with the character. While we may be in a Superman title, this is Booster’s territory and the combination works well.

As the issue begins to hit its conclusion, the inking on pages doesn’t hit the mark as well as earlier but still does its job nonetheless. Hi-Fi has their work cut out for them on colors. Over the course of the issue we witness a lot of different designs and characters and the colors suit every scene and panel. Jurgens writing and pencils work for most of the issue and continues the adventures of both Superman and Booster Gold, giving them both a story that push the characters in familiar and different territory.

Action Comics continues the push to #1,000 with a Superman tale that calls back to the character’s roots while charting new ground and exploring new angles to his history. Jurgens pulling double duty works well enough with the art only misstepping and the inkers fitting in line with both the action and talkative beats while the coloring and lettering brings it all together.