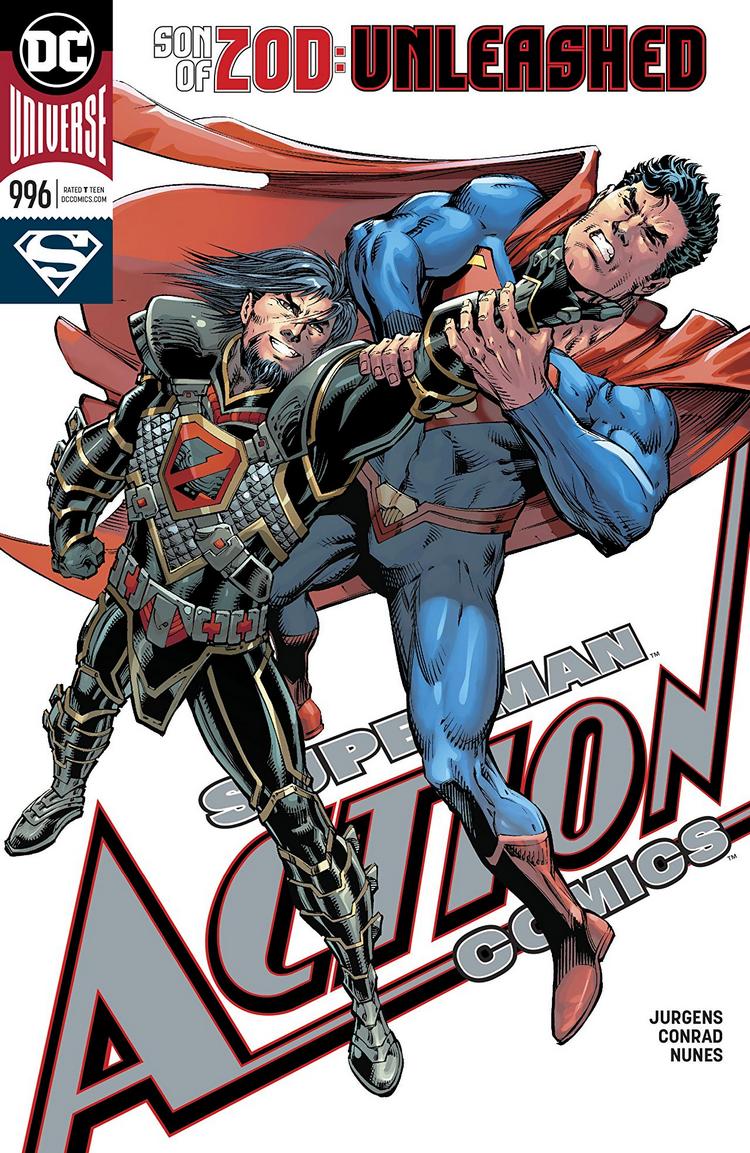 Booster Shot continues to be a Superman and Booster Gold adventure for the ages as aspects of Booster and Superman’s actions continue to have an effect on where they land and the situations are getting more dangerous and personal for the pair! In the present Lois and Jon have their own side of trouble in a more grounded and spy-centric tale that continues the lines of Jurgens telling a family oriented story among the fantastically weird time travel.

The balancing act of the two stories feels more balanced out as we start out Part 4 with the Lois and Jon story. Lois is getting a chance to have her own type of Parental Story and Jurgens writes her as a functioning and capable leader and a badass that has her own world to play in. Immediately from the splash page showing the two stories in their latest starting points, Conrad’s pencils and Nunes colors display a more larger than life entry into the Booster Shot story arc. There’s a lot of range here on Conrad’s part. The locations and characters go from jungles, enclosed locations in darkness with Nunes coloring showing the dark colored distinction quite well as Lois, Jon, and their help move in the moonlight whereas at the turn of a page were shown the brightly yet dilapidated setting of the Future with Superman and Booster Gold.

It quickly becomes apparent to the both of them, that the new surroundings are again, Krypton related and identify this “New Krypton” as Zod’s territory. Jurgens calls back to an earlier story of Action Comics with their new location and it’s partly because of Superman’s most recent battle with Zod and his family during the Revenge storyline. This new location is several decades in the future that relates back to when Superman last saw Zod and ruling over planets runs in the family as the cover shows.

What follows is more of the same thing we’ve come to expect with the Superman and Booster at this point. Further battles with the Eradicator ensue that allows for Conrad to get action-oriented and Leigh’s lettering is put to great use as Superman showcases his strength across pages and Nunes colors are bold and dynamic enough to reinforce the action and help supplement the background location. Conrad’s pencils have the time-traveling pair light on inking and weird facial expressions but Jurgens packs a lot of dialogue about the nature of their current time period and situation into the conversations with Superman, Booster, and Skeets.

This chapter of the arc plays into the duality of Lois and Kal’s missions of family and helps Conrad and Nunes stretch their artistic ability as Lois and Jon’s segments are stealth oriented and thrown into the dark. Jurgens gives Lois her own mode of operating things to get the job done and helps her stand on her own even with Jon eager to swing into the rescue. Her captions throughout are of a compassionate and capable woman that will go above and beyond to get the job done, just like her husband and gives the Earth bound adventures of the Superman Family more urgency as the time travel throws Time’s Finest into another troublesome spot that rings back to an earlier Action Comics arc.

With Booster Shot nearing it’s climax of time travel and earthly adventures, this issue makes steady progress on both accounts and brings one character into their own while offering what we’ve seen in previous installments with Superman and Booster Gold. Conrad is suited for both big and small moments as the issue goes to deserted streets to decades into the future with alien robots with action sprinkled throughout. Similar to Patrick Zircher’s style and panelling, we get a rush of close ups and panels suited for widescreen action. Nunes colors are perfectly accustomed to the pencils and the lettering isn’t left out because there’s major cause for Leigh’s work as the word balloons and fisticuffs provide ample examples for the diverse lettering. Action Comics continues to provide a good team-up story while bringing the recent storylines of the title to a head with Booster Shot and it doesn’t look to be letting up!