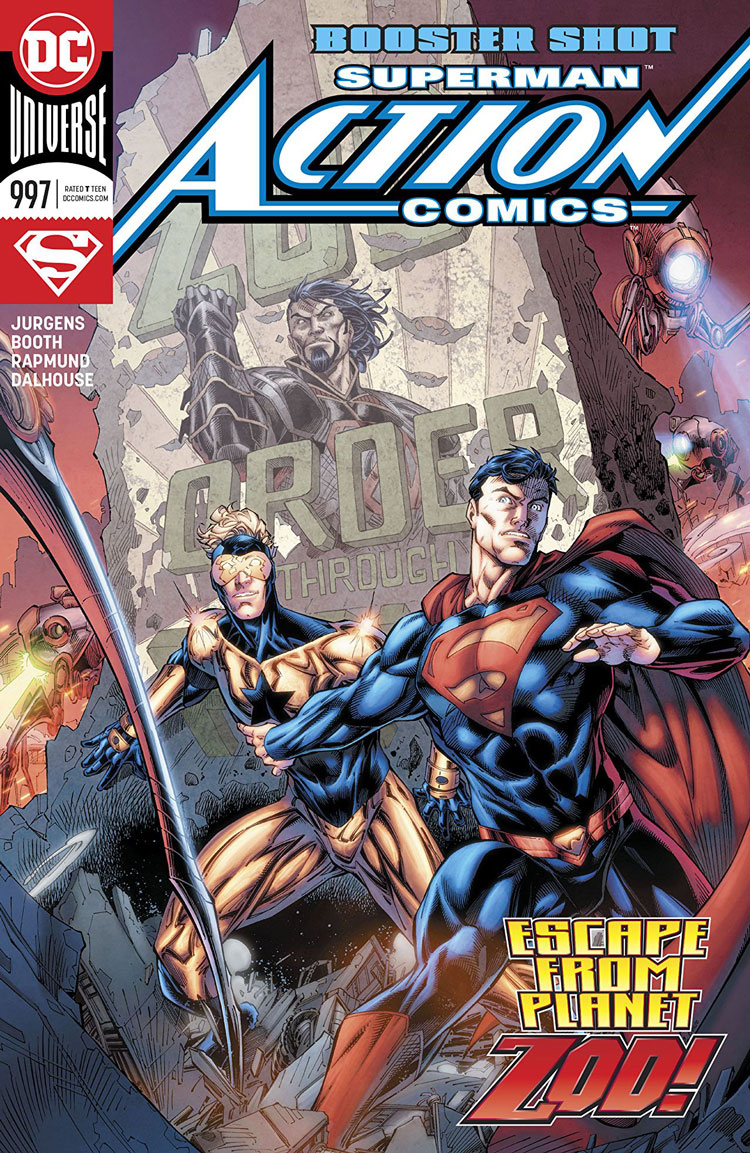 As Action Comics nears its 1,000 issue landmark, “Booster Shot” continues it’s romp through time as Booster and Superman face the generational might of the Zod Family in a far-flung future. On Earth, Lois and Jon have a family reunion of there one that balances the otherwise superhero heroics with a grounded more, straight forward tale about secrets and the lengths someone will go for family.

“Booster Shot” acts as the culmination of sorts for the recent batch of arcs for Jurgens’s run. Running plot lines throughout “Revenge,” “The Oz Effect,” and now Superman’s entire history have all been on the table with “Booster Shot: as a story arc finishing out the questions and stories for Jurgens with Booster Gold in tow. The story does well in  bringing it all together and increasing the clear and present danger that time travel has presented before them.

The battle between Lor-Zod and the Eradicator versus Superman and Booster is a battle that puts Booth’s strengths to use and the Dalhouse colors on full display. Booth excels at widescreen action and utilizing all of the panel space to give you every inch of the fight. Starting out the comic with a punch and breaking down the different sides to the fight in smaller panels beneath to give the smaller moments a chance to shine throughout the bigger, more cinematic action brings it all together.

The thin inking from Rapmund lets the characters come across as lofty and not as heavy-handed, especially for this action heavy issue. The lettering from Leigh is used in all types of ways from the punching to the characters and their unique voices. Booth spreads the action far and wide throughout the battle scenes and Dalhouse’s colors shine brightly all over. The inking clashes with the coloring well as the angles and the reds of the Supers are put to use as heat vision clashes populate and radiate off the pages.

Jurgens continues to come full circle as Old Man Zod makes his debut and the quieter storyline of Lois and Jon turns up the heat, as a family meeting of a different kind takes place on Earth. Booth and Dalhouse counter the larger than life, action of the future with the spy thriller qualities of the Lois and Jon rescue mission.

Booth continues to use the panels to spread the movements out over a series of spaces to tell a complete a scene. Using every inch of the page moves the story along and keeping the pencils focused on the characters up close let the expressions and emotional range shine through the angular bodies that may appear similar.

Action Comics as of late have put an emphasis on families of different strokes. The Superman Family, The Zod Family, and even Booster’s Family have all been embedded in this arc and been a calling point for “Booster Shot.” Jurgens injects Action Comics with tons of heart and old school enjoyment as the opposing stories have common themes run through them with time travel tying it all together. Superman is reaching a major milestone and with an arc like this reflecting on the stories of Action Comics past, it’s a good as time as any to continue “Booster Shot” because he still has a few twists up his sleeve as the final page is anything to go on.

“Booster Shot” continues the journey through time as Superman continues to seek answers at the heart of it all, it does feel as if Superman gets lost in the shuffle to combat the immediate threat of Zod. Jurgens has the voices set with all of the characters involved and Booth’s pencils sell the action and down to earth moments immensely with his style of art. Rapmund and Dalhouse impress with the colors and inking accentuating the scenes that demand more than the other and Leigh’s letters are on full display with the action in this chapter of “Booster Shot.”