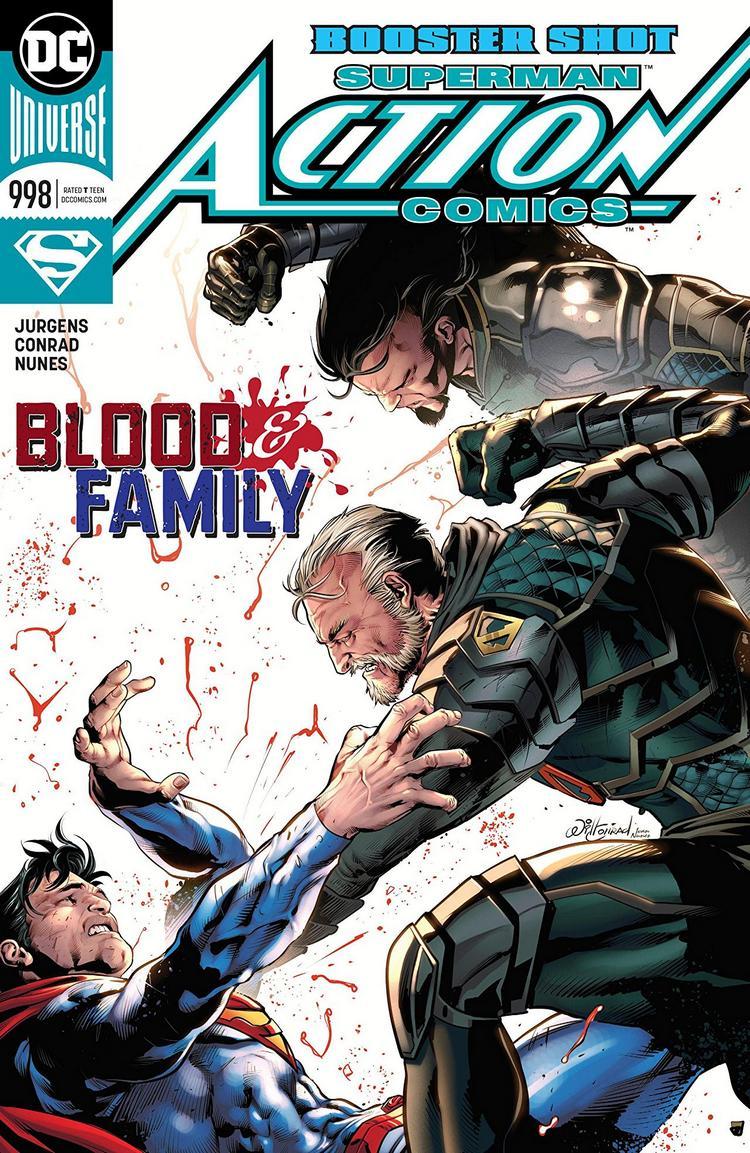 Booster Shot concludes it’s rip-roaring-time-traveling-adventure coming to an end that was always going to play out, even though the journey has proven quite effective for Superman, Booster Gold, and some finality to Jurgens most recent batch of stories for Action Comics.

Picking up immediately on the hectic last page that’s left both Superman and Booster at the mercy of the Zod Family with little to no time left to defend themselves from an execution and Conrad and Nunes make the pages ripe with energy, flair, and detail as the Zod Family lays on the heat vision to our two Heroes with some lighthearted Booster captions spread throughout the opening pages to let us know who is who and what’s going on. The colors from Nunes are exploding in the opening splash page as Conrad’s spreads the action across the immediate scene with a centered image and smaller panels to weave in the ongoing moments with different people and their expressions.

What follows is a battle on two fronts as Superman and Booster receive help from an unlikely source in the form of a revitalized Skeets. Leigh has a lot of different and unique voices to juggle with the lettering and differentiating them all is no small feat. From the fights that begin to spill out, the bout between Superman and the Zod Family allows for Booster and Skeets to get the journey back on track. Jurgens doesn’t dwell on this section of the book, and he shouldn’t. Booster Shot has been about the effects time travel can reap when you’re seeking answers by any means necessary. This arc has been a much needed rebirth for Booster Gold as Jurgens gets to write the fan favorite Hero again and give him some of the stronger material to work with as Superman doesn’t have much to work with other than just being Superman.

With the problems of the past, present, and future safely behind them, our Heroes have to stabilize the timeline to the beginning point in our adventure. We always knew we’d get to this point and the journey has provided some time bending twists and turns along the way. The inking could be stronger here as it’s all about Booster and Superman having a heart to heart about the whole reason they’re even in this mess to begin with. Jurgens provides someone clarified finiality to The Oz Effect here and let’s us know once and for all that what Jor-El said is true and he really did get swept away by a force moments before Krypton was destroyed. Conrad and Nunes give the scenes the right feeling of emotion as Superman takes in his planet being destroyed all over again. Booster does provide some reassurance and it establishes why Booster Gold is the Hero we might know about, but is one that’s well deserved.

Jurgens gives both Booster and Superman one last hurrah in their adventure together to clean up the one final mess that happened in the last issue. Despite the repercussions that are sure to follow for this last mix of time meddling, Booster does what he needs to do and saves the day, and by measure the Superman Family. Conrad settles back into the mundane, less extravagant Earth with some standard superheroics under the nighttime with Nunes adequately backing it up with some explosions and a heart warming family moment between Lois, General Lane, and Jon as this arc comes to a close.

Booster Shot has been a well deserved conclusion to some of the Action Comics stories he’s been writing for the last few months and a Booster Gold that reaffirms why he’s the Hero of the hour. Jurgens gives the two a push and pull dynamic and moments of levity as the prolonged issues of time travel began to affect their journey and their hope to undo it all. With an art team that covered the bigger, more set piece moments with the character building and makes everything look great in the process. With Booster Shot now in the record books, it’s only one issue standing in the way of Action Comics #1000.