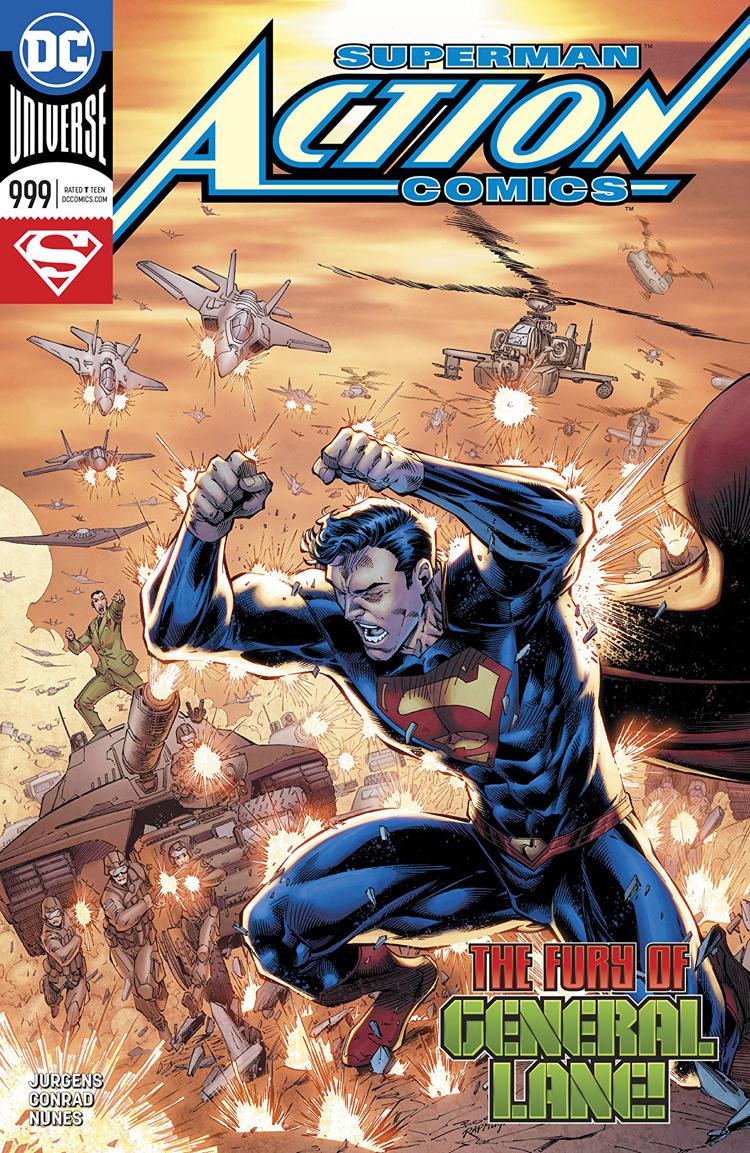 Who would’ve thought that the issue before the biggest comic milestone ever presents one of the most human and heartwarming tales for Superman in the Rebirth era yet? Jurgens concludes his time on Action Comics with a story about the family behind the Man of Steel and has the man himself on his own adventure that speaks to Jurgens time on Action Comics since he began writing the Boy Scout in Rebirth.

All throughout Action Comics, Jurgens has made sure Superman a family oriented title and given Superman, Lois, and Jon there own adventures to handle in and out of the arcs that have happened not entirely resting on just Superman’s shoulders. With “Booster Shot” we got a recent example of Lois and Jon having their own story to tell outside of what Kal has been doing and that continues here in this story. Grandad Lane comes home after their harrowing story of last issue and it’s a family affair as General Lane and Lois come to verbal blows over their occupations, where they stand on certain ideals, and the one common thread between the two of them…Superman.

While the family drama overtakes the household, Jurgens sets out for Clark to tie a few knots up in an interesting act of finality for Jurgens in some heroic acts of kindness that puts some of his villains to bed. Conrad goes from the conversational pieces of the Super Family to the wonders of space and Nunes colors dazzle in a sequence that has Superman use his heat vision to reach the center for a specific material. Throughout Jurgens has Superman think things through with all the events, or past story arcs he’s gone through and how he’s been affected by said events. Revenge, The Oz Effect, and most recently Booster Shot has given him insight on how people should be treated despite the things they have done and their upbringings, deserve a chance to save their humanity and themselves. Conrad focuses in on the expressions wholeheartedly with different panel layouts across the pages to tie everything together. Nunes colors bounce off of the photorealistic nature and are crisp, clean, with flair that capture moments by large and small.

Superman and Cyborg Superman come face to face and Leigh’s lettering for Cyborg Superman are unhinged and larger, expressing his rage at Kal. Conrad shows the impact of punches and crashes well alongside the heavy shadows and two characters as they crash and punch there way through the Fortress as Superman explains his newfound path. Conrad sells the emotions of the scene with Superman come from an honest place of understanding with what his longtime Rogue has gone through with being locked in captivity. He provides a solution that sets Cyborg Superman up for his own specific path that goes in league with the heartwarming nature of the issue.

All that’s left is to come home and to wrap up the issues at home. Both General Lane and and Lois have their own brand of justice and how they execute it with a conversation while tired and true over the years, still has resonance with how people view Superman on both sides of the argument when it comes to what he should be doing. Jurgens ends his run with the state of mind on fixing things in Superman’s World, whether it be in his Rogues or at Home. A great Superman tale doesn’t have to go overboard with spectacular battles or a grand cosmic epic, sometimes a great tale just needs the Hero doing what he does best, in and out of the costume. Jurgens cements his time on Superman with a happy ending that changes the game, wraps up plotlines and hanging emotions from arcs that have had lasting impressions on his cast of characters and maybe even given older characters or new spin on life.

Jurgens last issue is as final as one could make it. Acting as a conclusion to everything that came before, Action Comics is primed and ready for issue 1,000 and more stories about the Man of Steel. Jurgens, Conrad, Nunes, and Leigh just had to make sure they hit an emotional high note before they had to wrap up.