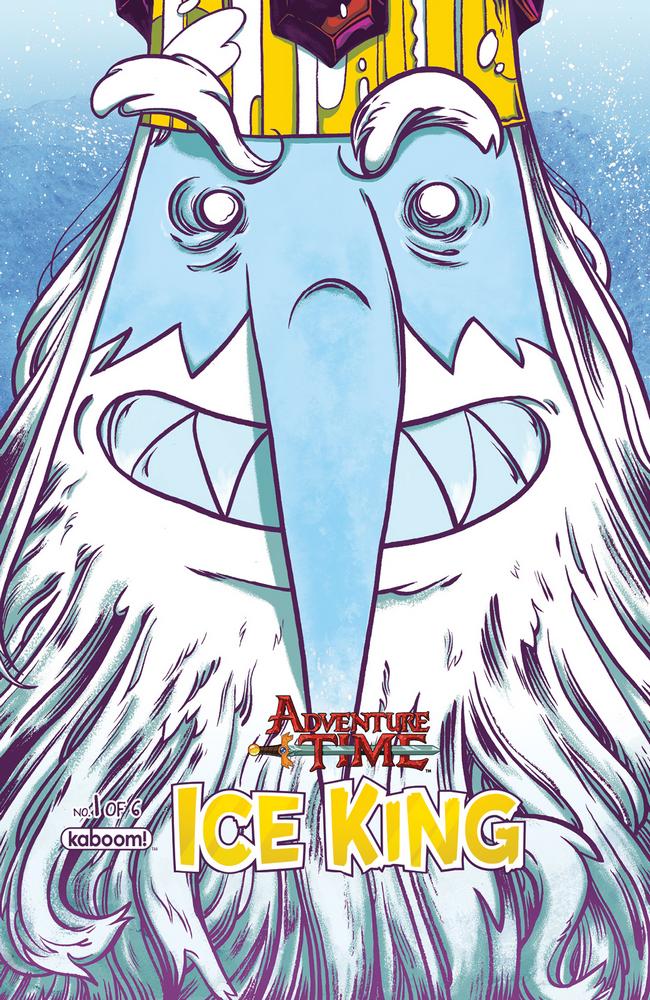 Wizards only, fools; keep it tight!

Ice King is beside himself rummaging through kingdoms, refrigerators, and sock drawers to find his missing Gunter. A ransom note points him in the direction of Wizard City and into the paths of some of our favorite wizards of Ooo. Ice King gets the chance of a lifetime that will help him regain the company of his penguin pal.

Like many of the Adventure Time minis, Ice King reads like an episode of the series. I love the miniseries for Adventure Time because they don’t seem like random and isolated stories. They’re a great chance to showcase characters who aren’t always the main focus of the comic or the show, expanding their stories in really cool ways. Ice King is your typical adventure about Simon, his interactions and understanding of the world around him tainted by his magical crown. There’s nothing too new about this story, but it has the right kind of feel to explore Ice King as a character.

Emily Partridge and Pranas Naujokaitis definitely have a great understanding of Ice King and what makes him great. Their framing and writing through this issue fit right in line with Ice King’s over the top behavior. The interactions between him and the other characters really make the story, especially an exasperated BMO kicking the ice blue monarch out of their kitchen. Ice King’s emotional stories have always defined him for me, but another major part of his character is just how fed up most people in Ooo are with him. He doesn’t really have a niche though he desperately searches for one, with hilarious results, and it was nice to see that in the first issue of his miniseries.

The art and speech bubbles of Ice King #1 are your typical Adventure Time fare. The people and environments are funky and the words fill up the panels in all manners of ways. Natalie Andrewson is keeping with the spirit of the overall franchise, a perfect fit for a character like Ice King. The art really comes to life in Wizard City, as Andrewson captures the wackiness of Ooo’s magical denizens.

Ice King has a lot of emotional depth and conflict which I hope comes out through the miniseries as it progresses. However, that’s also my personal bias, as I love the stories that focus on Simon and how he became the Ice King we know and sometimes love. At the same time, though, Ice King has a lot going for him just being his silly self, so I see Ice King going in a lot of possible directions that will work. If you want something lighthearted and magical, I say go for this series. It’ll be a quick and fun read, much like the overall Adventure Time comic, but Ice King gets to embark on his own adventure to test the limits of his cool.