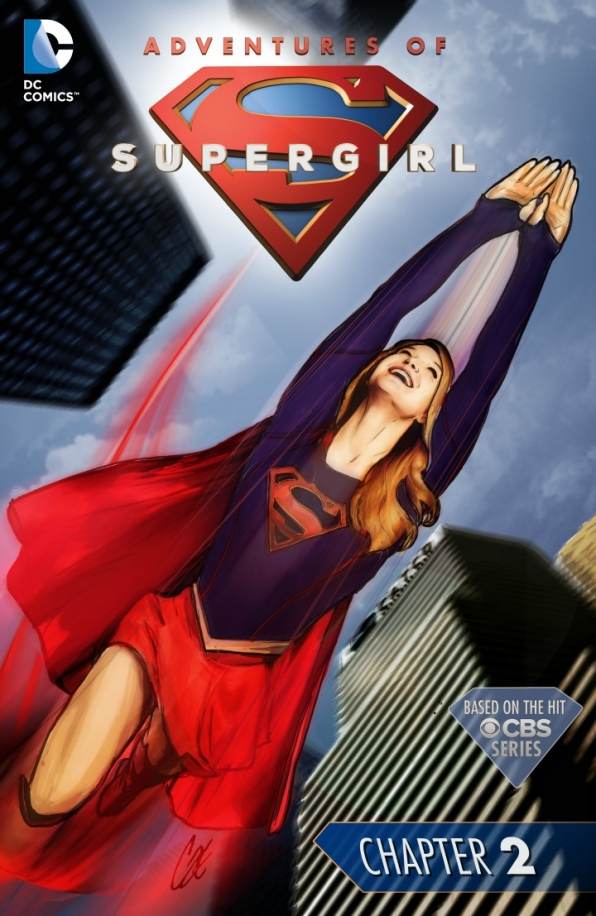 The second chapter of the tie-in to the CBS TV series hits digital devices today in “Sistery Mystery” Part Two.

While there was some discussion over the panel construction for the first installment and its readiness for digital, artist Bengal has adjusted nicely, accommodating the rectangular shape of most devices and saving the jagged orientation of panels for moments of extreme action. Like when Rampage attacks. Those adjustments happen along organically through the story, which is readily approachable, despite being a direct continuation from two weeks ago.

Gates’ dialogue is bouncy and fun, in the spirit of the show, but with a little more range and room to expand. Winn delivers a funny line that fans will recognize as a wink and a nod to Rampage’s similarity to another large muscle-bound character with anger management issues.

Winn is just a sliver of this story, however, as Gates uses Kara to narrate the adventure. He shares her adjustment to learning here on Earth (as opposed to Krypton) and the conversions that sometimes requires. Gates reminds us that as much as readers know about Supergirl and her supporting cast, Supergirl herself barely knows more. In this manner, Gates takes us readers by the hand (but not in a condescending manner) and guides us through Supergirl’s adventures.

My biggest concern is the overt nature in which Kara and Alex throw around each other’s first names. Not a big deal for Alex, as she has no identity to protect, but Supergirl is, presumably, wearing the S-shield for a reason other than as a fashion statement. It’s a minor quibble, to be certain, and one that is easily dismissed, as Gates is establishing identity and relationships for any new readers.

Still, as a longtime comic reader, I cringe (even if it is internally, and only just a little bit) whenever I see an alias being shouted out as is evident in Saida Temofonte’s word balloons cast by Alex inside the plummeting chopper that Supergirl is trying to stop.

Bi-weekly, ten-page (although, thankfully, it feels longer in the digital read) adventures aren’t the easiest vehicle for writers to use to deliver satisfactory stories, but, thankfully, Gates has Bengal alongside him for the art chores. Bengal doesn’t strive to maintain likenesses of the characters any more than a theme park caricature artist strives to deliver detailed portraiture to her patrons. The essences of the characters are present in the dialog, Bengal brings along mannerisms and energy, and does a masterful job of taking Adventures of Supergirl #2 beyond simply being a promotional vehicle for a successful television show.

This story is full of energy and promise. Even in the quieter moments, Bengal is able to flex his artwork to inform readers, whether Supergirl is checking for broken bones on a D.E.O. agent or just piecing together that she happens to be missing some information. Bengal brings a nice amount of acting to the page, and his style is open and charming enough to actively engage readers of all ages.

Adventures of Supergirl continues to be a must-read, day-of release. Comic book fans can look forward to every day of the week for one reason or another, and with the Supergirl show on Monday nights, we already had one reason, but Mondays aren’t exactly known as everyone’s favorite day of the week. Thankfully (at least every other Monday) Gates and company are giving us a reason to look forward to Mondays, and the cliffhanger of this installment will definitely have you pining for that fortnight to fly by like a certain Kryptonian.