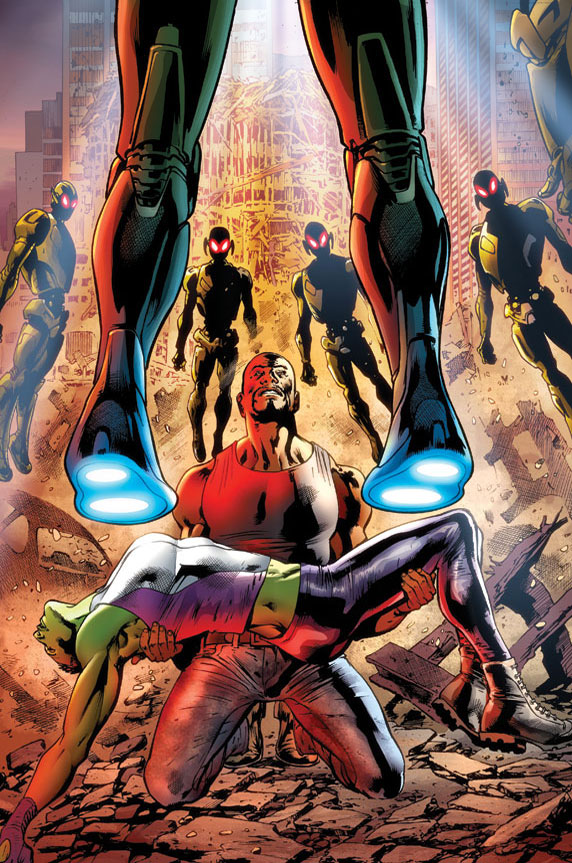 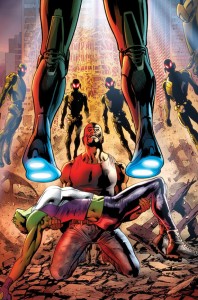 I’m not going to lie, Age of Ultron is starting to make me dizzy.

Age of Ultron has had mixed reviews so far, and I am sad to say this is not the issue that blows this event wide open. The comic is like a loop of the first two issues, repeating itself constantly and while some reveals are  interesting in the book, the pace is still brutally slow. This may read as a fantastic collection one day, but as a monthly comic the pace is brutal. Bendis has created an interesting dystopian future featuring the characters we all know and love, but as of yet virtually nothing has been done with them. We get a few more snippets of the state of the Marvel U in issue #3, but after nearly 90 pages of downtrodden heroes I can only hope that the events of #3 will spark something huge in issue #4. Pacing aside, Bendis is obviously building toward some huge events in this series and the last page definitely hints at some huge reveals going forward.

Bryan Hitch’s art is solid throughout the comic, though his splash pages of destruction are largely what is dooming the pace of this book. He draws some mean wreckage, don’t get me wrong, but pages of destroyed buildings do nothing for the story in a single issue after 2 other issues of the same. Hitch’s widescreen style paints a very bleak picture for this dystopian world and his art is very well suited to the story, when it is occurring. The portions of the story that do feature break out moments for some heroes are well crafted and really stand out against the pages of bleak scenery and give me hope for the remainder of his issues. Eventually all hell is going to break loose in this world Hitch has built, right?

Age of Ultron #3 in and of itself is an average comic, but if you’ve read #1 and #2 it is really just more of the same except for the final page. I’m still optimistic for the series as a whole, but issue #3 left a lot to be desired.