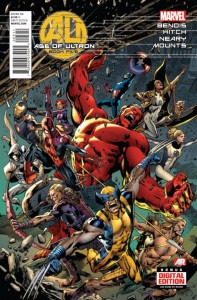 So I stuck it out.

Thanks in part to dedicated fans who kept offering me digital codes for the issues after #1, a comic you may recall I had a bit of criticism for, I decided to take the plunge and purchase #5 once again of my own accord. And I’m delighted to see a real difference.

With the reappearance of a major Marvel character not seen nearly enough in the universe these days, the heroes begin to develop a real understanding of how the Age of Ultron came to be, and just what can be done about it. Bendis does an excellent job of balancing a lot of exposition in an issue that sees very little action, but frankly, this series needs this change. Ever the master of the Marvel personality, even in dire times, Bendis plays out the differences in this sort of rag tag team very well. In particular, one can feel the absolute exhaustion that permeates Tony Stark and leads him to a near delirious state of punchdrunk laughter, and calls out the very question many readers have asked for years: how can we trust an ally that was created by one of our greatest enemies? Sure, the Avengers have a long history of taking great leaps of faith on members with questionable pasts, many of whom are still standing by their side in this grand wasteland. Quicksilver, Scarlet Witch, Hawkeye, Wolverine, and the Black Widow were all at one time or another working the other side of the line or otherwise working outside traditional heroic parameters. But the Vision was programmed to hate the Avengers. And it’s come to roost.

The echoes of time travel mentioned in previous issues come to the forefront here, with the usual ethical debate surrounding the butterfly effect and the like. I did find Wolverine’s position a bit disingenuous given his reaction to characters time travelling forward in Bendis’ other, absolutely stellar title All New X-Men. I suppose desperate times call for desperate measures, but, like Peter Parker’s clear presence here (you cannot tell me that is Doctor Octopus. There is not a chance.), it’s just something that needs to be written off given the timing of this event. And truly, as I have observed in rereading books like JLA and Animal Man — where weird continuity issues determined whether Superman was electric blue or which Justice League was allowed to appear — I suspect this tale will read far better in perpetuity for its ignoring current continuity. So, bravo on that front, Marvel.

Hitch’s art, unfortunately, continues to suffer here in comparison to his recent creator-owned work and famous material for the alternate-universe Avengers, The Ultimates. He has never been an artist that I felt could only do widescreen action (although he is certainly the master at that genre), but here again, any panel with more than one or two characters within seems drastically rushed and under-attended to. The lush photo-realistic perfection I have come to expect from this art team, particularly on a project so long in coming, just isn’t there. That said, compared to a great deal of comic book interior art on the market, Age of Ultron still feels compelling and professionally done. Higher expectations are what we’re dealing with here, not poor performance by any means.

A story that has finally come together and seems to have real ramifications for the greater Marvel Universe (not too late to reboot, kids!), Age of Ultron is now living up to the potential that these type of events promise, and Bendis’ craft is shining through as a result. Very eager to get the next issue next week.