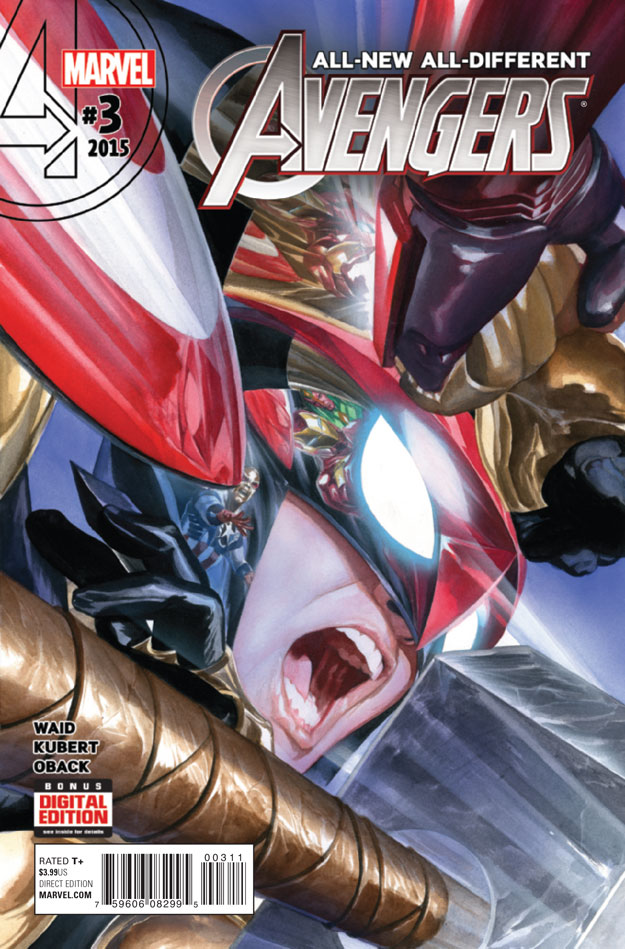 Sometimes you need the proportional speed of a spider.

In the final act of our All-New, All-Different Avengers’ first arc, the team bands together to take down Warbringer. As the man behind the scenes tries to make things go his way, this new group of Avengers makes the most of a dire situation to turn the tides of a fight. There’s still mystery in store as two members have a secret meeting which may not bode well for one of them.

This issue is what I have been looking for since I first picked up this series. It’s been a long time since I’ve been excited about an Avengers series or team, but here I am, ready to see what’s going to happen for our new Mightiest Heroes. The addition of Kamala, Nova, and Miles guarantees a clash, but also a new era for Marvel’s flagship team. Having vets alongside newbies means that tackling enemies may require and utilize the ingenuity of millennials.

Mark Waid has done a great job introducing this team and creating some interesting threads to use for the series as it moves forward. This story is fast-paced and it is not long before we get to the climax and resolution of this first arc, masterful moves on Waid’s part. I like the attitude in each of the young members and how they are not afraid to stand up to the Avengers veterans, but also their enthusiasm in becoming part of a major group.

The most stellar feat from this issue’s art team were the action sequences. Throughout the issue, I enjoyed how expressive the art was. When it came to the fight with Warbringer, though, this team pulls out all the stops, putting each character’s powers and emotions on display. There’s a lot of action and movement, and it’s fleshed out wonderfully in conveying the excitement of each scene.

I knew that getting to the final chapter of the first arc for All-New All-Different Avengers would be the deciding factor in determining the impact of this series. I got everything that I expected with fighting, but also the budding relationships between each of the characters. This issue was a great way to bring in the ANAD wave for the Avengers, but also in establishing the utility of some of Marvel’s fresh faces. I am pumped for this series moving forward, and I am definitely happy to be excited about reading a new Avengers title.