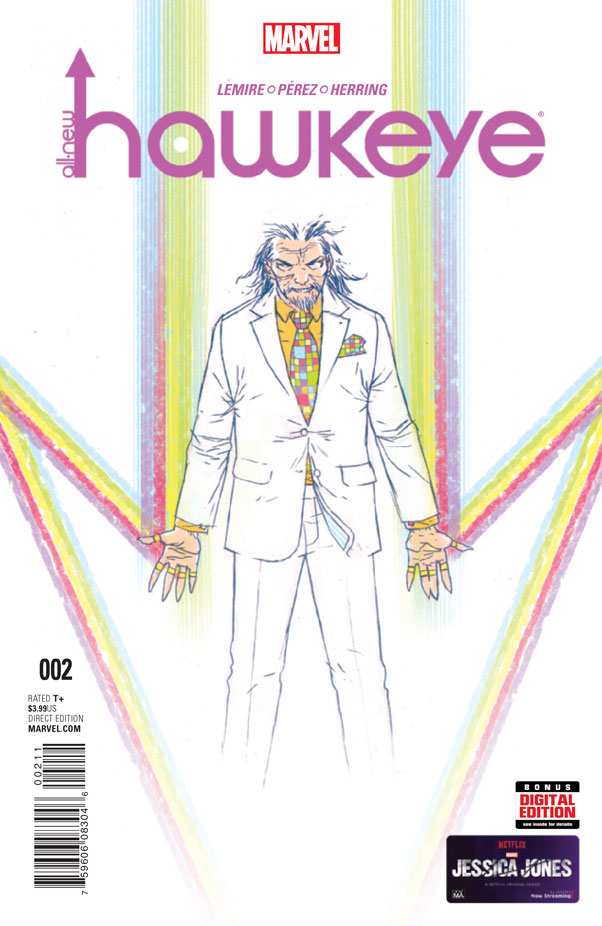 The taut string of the bow reflects the feelings between friends.

In the future, Kate and Clint endeavor to escape the Mandarin, while in the past they’re both reeling from the rift between them. While they both struggle to sort out their conflict in the present, they’re resolved to take down a common foe in the future, tying together a story unresolved for thirty years.

Reading All-New Hawkeye #2, I realize that while this is a cape comic, the vital thread is Clint and Kate’s relationship. In the context of his history, this issue paints Clint as someone who values his relationships but may not always know how to say it. With a team, he’s a bit different and it’s easy to mask his vulnerability. Kate on the other hand made her name as a Young Avenger and grew to be able to assert herself and her boundaries, making her more reluctant to communicate with Clint.

Clint and Kate as characters become evocative under Jeff Lemire’s pen. He maintains their quirks and nuances, even through time, while imbedding them in an emotional context. Kate and America have a particularly real interaction in this issue, capturing how we’d talk to our friends in similar circumstances. Lemire shows us that Clint is rather stubborn yet affected, while Kate is young, bold, and compassionate.

The art in All-New Hawkeye #2 is particularly lonely, an effect that’s important in carrying the emotional undercurrent of the story. The future feels rough and desolate, while the present has its moments of emptiness. Ramon Perez and Ian Herring continue to aptly portray the depth of feelings between Clint and Kate and their surrounding circumstances. The wordless panels in particular seem to have the greatest impact, their panels full of a somber sentiment.

All-New Hawkeye continues to be a series I’d recommend to others. The action takes a backseat to Clint and Kate’s story, and there’s nothing lost in the meantime. There’s no need for extravagant displays of superpowers or archery; the tension between Clint and Kate speaks for itself and carries the story through the past and present. For an exploration into these characters, definitely pick up this issue. While not dialogue heavy, it is still rife with emotion.