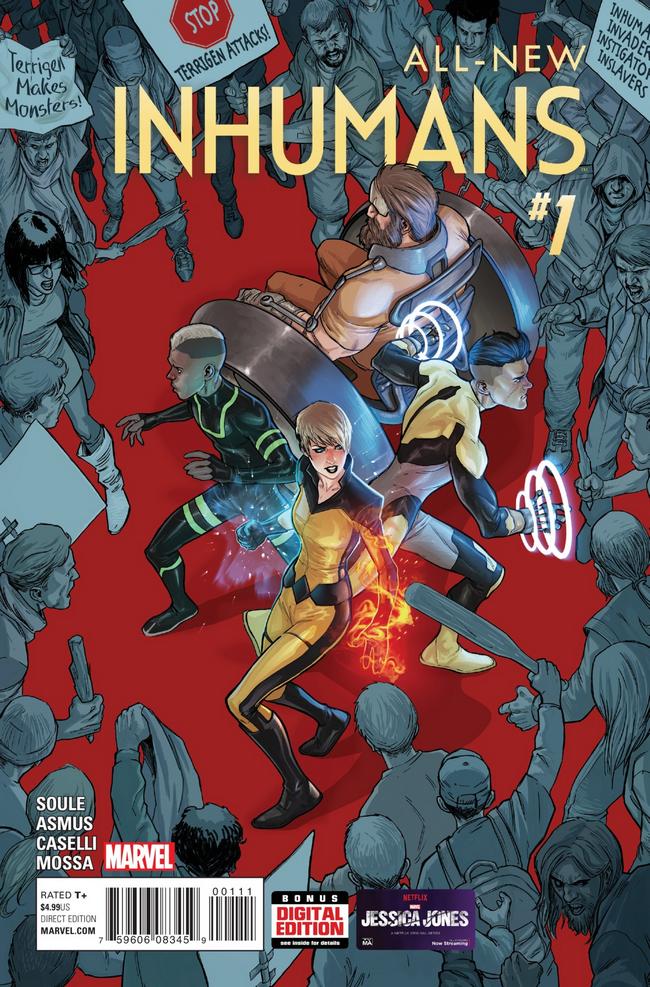 The Inhumans are experiencing a focus that mutants enjoyed in previous decades of Marvel media. In current Marvel comics, people around the world have seen their superhuman powers activated by the spread of Terrigen Mist in the air. James Asmus and Charles Soule’s new series assembles a group of new Inhumans, or “NuHumans,” to be led and trained by veteran Inhumans. Like mutants have in the past, the NuHumans quickly learn that many humans see them as a spectacle to be objectified, or worse, a target to be hated.

I like how Asmus and Soule bring the older generation and younger generation of Inhumans together. Crystal and Gorgon are members of the Inhuman royal family and veteran characters. Flint, Dinesh (aka Grid), and Naja are NuHumans. I wish the NuHumans’ powers were explained a little bit more explicitly, but we see Flint has seismic powers, Grid controls electromagnetism, and Naja can camouflage herself. Unlike the X-Men’s safe environment of the Jean Grey School, the NuHumans get on-the-job training by facing a mob of armed, xenophobic humans.

Crystal’s showdown with this mob is the issue’s most powerful scene. The humans hold an Inhuman woman captive in a barred cell. The mob’s leader spouts hateful rhetoric calling Inhumans “alien half-breeds” and “mongrels” and criticizing the government for welcoming them. He incites listeners, whom he calls “pure” human beings, to act violently. Asmus and Soule’s dialogue choices are frighteningly real.

This creative team adds another layer to the metaphor of Inhumans as a targeted, marginalized group. One member of the angry mob attacks Crystal and reveals himself to be an Inhuman. Instead of identifying with the Inhumans in solidarity, he hates the fact that he is an Inhuman. When he attempts to pass as acceptable to those around him, he’s surprised when they turn on him. I love how Crystal’s personality is written: she’s unfazed by others’ ignorance, and has no qualms about delivering badly needed doses of reality.

Gorgon has an important scene where he is hesitant to lead the younger Inhumans because he can no longer use his legs or his powers. Crystal reminds him that Charles Xavier trained students while in a wheelchair, too. Many high-profile Marvel characters have lost their powers before, including Storm, Magneto, and Emma Frost, and I look forward to seeing how Gorgon develops as a character. The writers also introduce Crystal expressing disagreement with her sister, Queen Medusa. Crystal’s disregard for Medusa’s concern about her own public perception is a pleasure to read.

This series debut gives readers a perfect jumping-on point into an original, engaging story. I had never read a comic featuring Crystal before, and the writers introduce her personality perfectly. Soule and Asmus bring together classic Inhumans and a new generation to confront hate and oppression. All-New Inhumans immerses readers in one of the most timely and relevant corners of the Marvel universe.