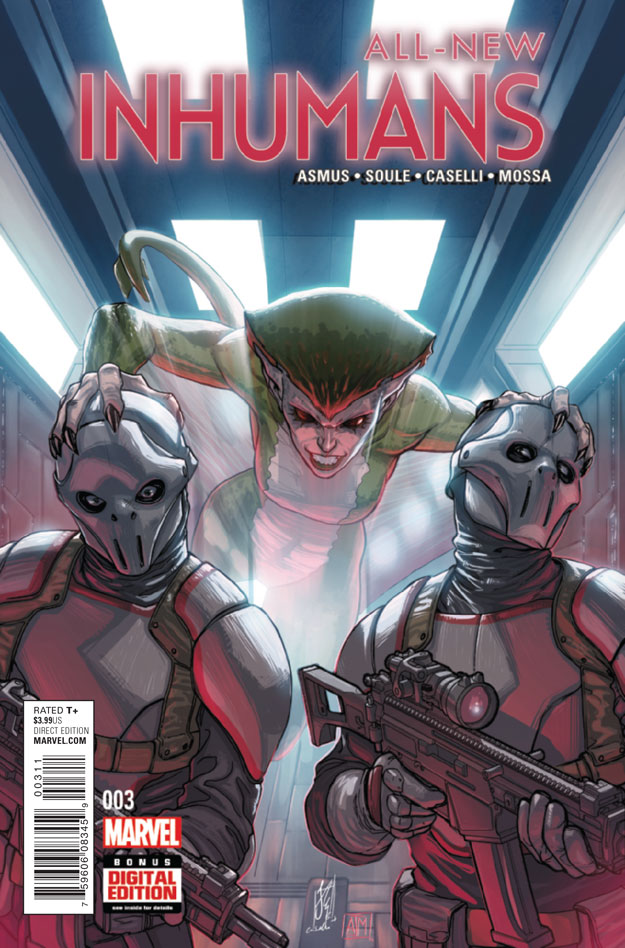 Crystal’s band of Inhumans are still poking around Sin-Cong, trying to get to the bottom of a strange communal dream and determine what the Government is up to in the totalitarian country.

There are three threads running through the issue, and I had slightly differing reactions to each. One was very interesting, one was just fine and the other had some predictable elements. I quite enjoyed the most unique story beat, involving a shared dream and whole new concept of an Inhuman, and wanted a lot more of it in this issue. It leads to a great cliffhanger that takes a messy situation and makes it even more chaotic, and nobody can argue with that being a good thing. Crystal is written well throughout the issue and her character makes her pages more interesting due to her well crafted dialogue. The more straightforward of the three plots is not poorly written or executed, but it does drag a bit because of how predictable it is. It is a necessary means to an end to set up the situation that closes out the issue, and it by no means sabotages the entertainment value of the issue as a whole. Asmus and Soule are performing an admirable task bringing this group of Inhumans to a higher level of prominence in the Marvel U, and it is exciting to see them wield these characters.

Stefano Caselli’s work is always awesome, and issue #3 of this series is no exception. This is a damn good looking comic and Caselli is one of the best artists in the industry. The Inhumans are a very diverse cast of characters and he handles them very well, including the newest member of the species who has a different angle than we’ve seen before. Andres Mossa’s colour work gives Caselli’s artwork an extra punch that makes it leap from the page and there really isn’t a poorly executed panel in this issue from the art team. This is just rock solid execution from start to finish and All-New Inhumans #3’s visuals were crafted by an A+ team.

This comic was entertaining and I’m pumped to see where Crystal’s team goes next. There’s a really interesting hook with one of the ongoing plot threads and the more predictable storyline has lead to something I’m game to read. All the right pieces are in place for an explosive end to this arc.