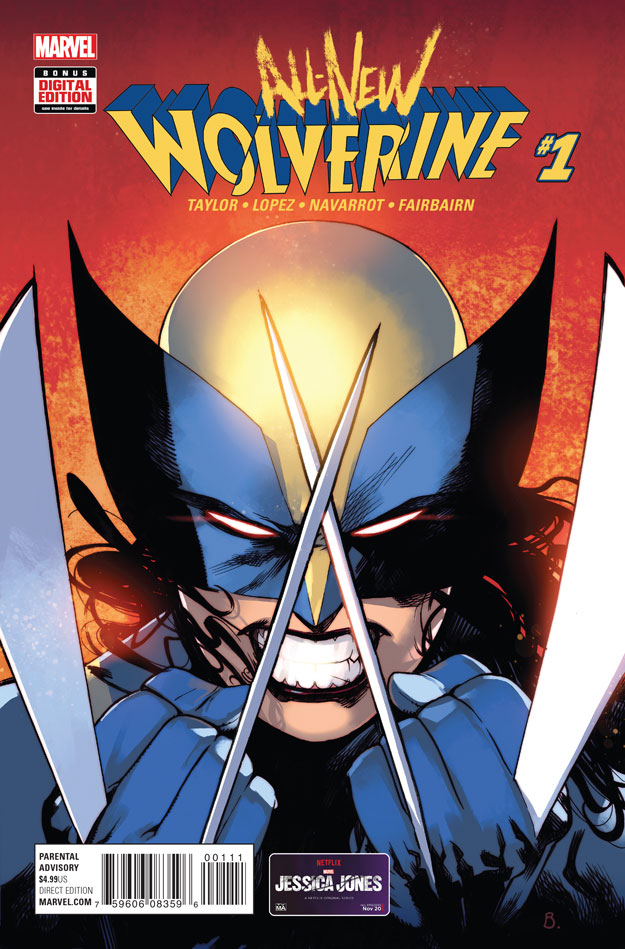 There’s a new Wolverine on the scene, as the woman formerly known as X-23 takes the mantle as the best there is at what she does.

Tom Taylor is writing a winner here, giving readers a confident, powerful Laura who is more than worthy of the Wolverine name. She’s strong, confident and capable and her relationship with Angel is a wonderful thing to have occurring on these pages. Taylor has a great voice for Laura and is building a very intriguing mystery for her. He uses her past as fuel for her rather than having it define her and there is a great flashback scene that establishes her as Logan’s pupil for readers who have not extensively read the issues that highlight their shared past. It’s a touching flashback that Taylor uses well to highlight parts of Laura’s personality and round out her similarities to the original Wolvie.

This story doesn’t dwell in the passing of the torch, but Laura rather grabs the moniker and runs with it. With David Lopez on art, it very much feels like Carol Danvers’ ascension to Captain Marvel from Ms. Marvel. The name suits Laura very well and Taylor and Lopez treat this character like the high profile player she should be. This is a Wolverine comic through and through, with the same high quality that won fans over with the Jane Foster-era Thor. It has an energy and excitement built into every page with this new era of Wolverine and I’m excited to watch this creative team bring Laura into the A-list category that she can hold her own in.

David Lopez’s artwork is great in this first issue as he captures the strength and stubbornness of Laura very well. Through the visuals alone you can tell that she’s tough as nails and a capable Wolverine and Lopez has shown with this issue and his Captain Marvel run that he has a knack for drawing strong, powerful female characters. He doesn’t shy away from showing what this Wolverine is capable of as a fighter and I was impressed with how Lopez adapted the classic Wolverine costume for Laura without her looking ridiculous. His design for Angel is fantastic, as well and I enjoyed how he paced the visuals in this issue. The story flows really nicely and the detail in his backgrounds was appreciated. He works well with Taylor and does this high-profile first issue justice.

All-New Wolverine #1 is a strong debut issue by a great creative team that has a lot of life and energy. There’s a solid hook going into issue #2, some good back story so people can get the low down on who Laura is and some awesome banter throughout the issue. This one is a winner and I think big things are coming for this all-new Wolverine.