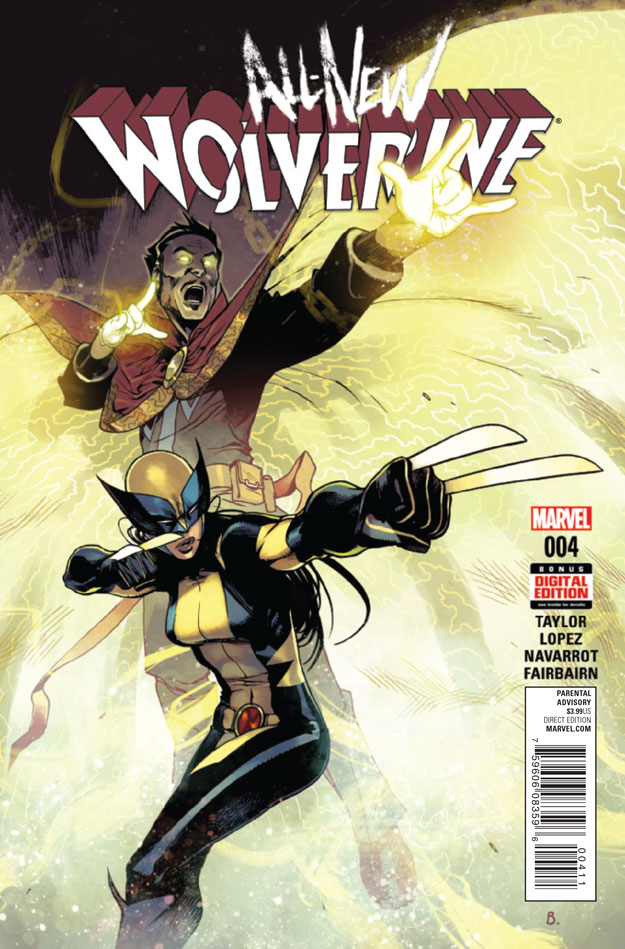 Laura enlists the help of Stephen Strange to help find out what is going on with her clones. Needless to say, it all goes to hell and Laura’s adventure with her “sisters” continues.

Tom Taylor continues to bring Laura to the A-list and with each passing page, this character deserves all the attention she’s getting more and more. Taylor’s dialogue is spot on and Laura has all the grit of Logan with 10 times the heart. She is the successor to the Wolverine mantle in the exact same way Carol Danvers took the Captain Marvel name, and Taylor’s writing is assuring the same fantastic results. In my mind, only 4 issues into this series, Laura is Wolverine. Her current tour around the Marvel Universe to interact with characters who had histories with Logan is an interesting angle and makes this first arc feel like a very strong “passing of the torch” story.

Taylor adds a lot of humour into this issue, using Strange and the eccentricities that come with him for some comedic effect. The Sanctum Sanctorum is a unique place and when you put the Sisters and their rage in there, good things happen. Taylor also takes a wonderful jab at the Internet, one fans of this book will certainly appreciate that cemented him as the right writer for this character for me.

David Lopez & David Navarrot give Laura all the kick-ass attitude we’d expect of the character in this issue, while also being able to drive home her compassion, humanity and regret. Her interactions with Strange say so much through visuals alone, and the art for one of her flashbacks is powerful. These artists are on point in this issue, hitting the comedic beats with the action and the style of the artwork is very much up my alley. Lopez’s pencils show Laura and the Sisters as scrappy, tough-as-nails characters but he can turn off some of that killer instinct with a single facial expression, which suits these characters perfectly. While every comic’s story is told visually as well as through script, with All-New Wolverine #4 I feel there is an immense amount said in the artwork and the subtle touches really make this issue soar. Nathan Fairbairn’s excellent colour work enhances those subtle touches, giving places like the Sanctum life while making Wolverine and Strange leap from the page. His work is the perfect compliment for the tone of this story and artwork.

All-New Wolverine #4 is a damn good comic that entertained me mightily. Wolverine is one of my favourite characters to be thrown into the forefront of the All-New All-Different launches and this issue continues a streak of good comics by the hot hands of Taylor, Lopez, Navarrot and Fairbairn. This is a strong creative team telling a great tale with excellent characters and I’m excited to see where their next adventure takes them.