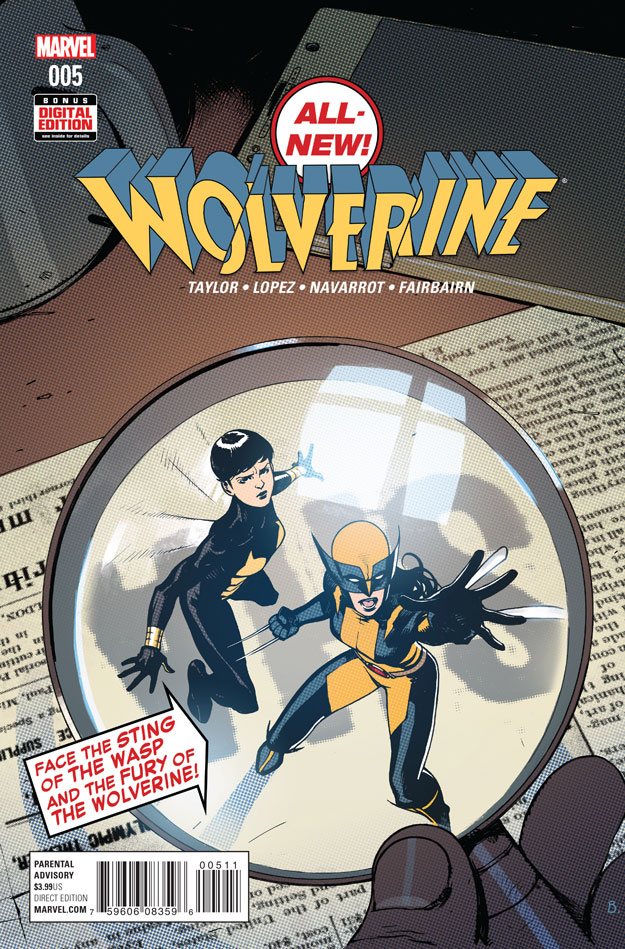 Zelda’s last shot is for Laura to get really, really small as Wolverine’s tour of the Marvel U with her “sisters” continues…

This comic has a great team dynamic to it, with Laura and her clones meeting up with a different Marvel U mainstay each issue, and Wasp adds a lot to the mix in issue #5. She has great banter with Laura and the clones, and Tom Taylor knows how to channel Janet’s unique attitude. There is a phone call, in particular, that makes me want to read a Tom Taylor/Wasp ongoing, and her general presence in this issue brings a lot of fun situations. Continuing to put Laura in situations that readers would be used to seeing Logan in is a very interesting angle on this book and this issue works easily as well as the Doctor Strange team-up.

Taylor’s Wolverine is a wise, resourceful and willful character in this issue which lets him go a little crazier with the clones and when the issue comes to a close…whoa. Hell hath no fury like these women, they are powerful and they are forces to be reckoned with. Taylor does a great job balancing the calmer, rational side of Laura with her ability to go full out berserker, and he has a really great handle on the character and her supporting cast.

David Lopez and David Navarrot provide consistent artwork in this issue that has a bit of “Allred flair” to it. I mean that as an immense compliment, and the overall tone of the artwork makes this issue light and entertaining. The artists do a great job giving each of the clones a unique personality despite their similar appearances, and Janet owns any page she appears on. It isn’t all fun and games, though, and this art team can deliver the look and feel of a team of cold killers when necessary. Nathan Fairbairn’s colour work adds to the Allred-feel, and I especially liked his work when Laura and Janet were inside Zelda’s bloodstream. This series has already has some wild things for these artists to bring to life and each does their job admirably in this issue.

All-New Wolverine #5 is a great penultimate chapter in Laura’s first story as the Marvel U’s Wolverine. Taylor, Lopez, Navarrot and Fairbairn are a great team and this arc has only grown stronger as it has progressed. Heads are gonna roll very soon, and I’m excited to see where these storytellers take Laura next.