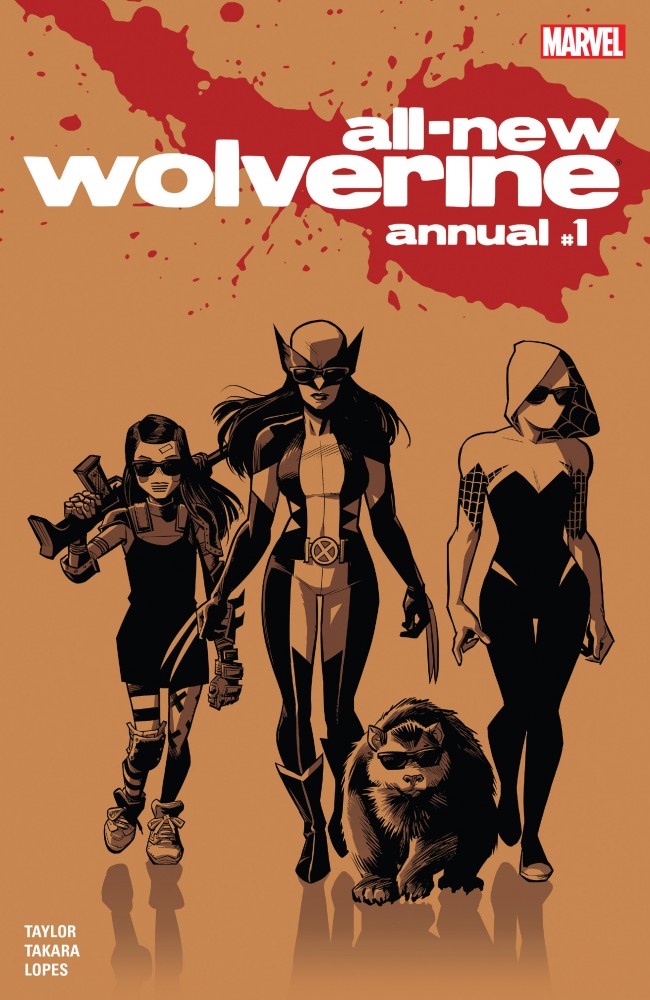 Almost exactly two years ago, Charles Soule and Steve McNiven set out to do something thought next to impossible in contemporary comics: give resonance and meaning to the death of major superhero. For anyone willing to set aside cynicism and the long track record of snap returns from the dead, The Death of Wolverine was a heartfelt capstone to arguably the strongest era in the angry Canadian’s history kicked off by Jason Aaron in 2007.

Instead of the shock and spectacle that accompanies most superhero deaths, Wolverine’s impending death was built up throughout Paul Cornell and Ryan Stegman’s run, turning the four issue Death of Wolverine miniseries into an excruciating march towards a predetermined outcome.

When the time finally came, Soule and McNiven didn’t hold back; Logan didn’t get a heroic sacrifice. He didn’t get to go down swinging. He suffocated to death in a block of adamantium as the sun rose in front of him. There was power and pain to it because Soule and McNiven had executed a Wolverine worth missing: the man who took a stand against Cyclops to found his own school and bear the weight of the violence X-Force absorbed to protect it.

It had resonance in the moment because it felt like something genuine was being sacrificed. There was something to mourn in the loss of Wolverine beyond a hypermasculine power fantasy. It continues to have resonance because Marvel has honored that sacrifice by keeping him dead.

So in a way, there’s two anniversaries to observe with this issue: the first of Laura stepping into the mantle and the second of the death that created the vacancy in the legacy, a state of affairs that Tom Taylor subtly weaves into a birthday cake with buttercream frosting as thick as Laura’s claws are long.

Similar to the last issue of Amanda Conner and Jimmy Palmiotti’s Harley Quinn before launching into Rebirth, Taylor and Marcio Takara use the annual to take a step outside of the pressures of superhero storytelling to indulge themselves and the fans, something hard earned given last issue’s heart stopping conclusion. The set up is as simple as it is rewarding: an experimental weapon meant to transport the target to an alternate dimension has put Laura in Spider-Gwen’s body and Spider-Gwen in Laura’s.

The issue kicks off with the series’ trademark dark humor Taylor transported from his time on Injustice for DC as Gwen in Laura’s body flings herself out the window of the apartment she shares with Gabby and Jonathan the Actual Wolverine thinking she can shoot some webbing only to drop a few stories and faceplant into the hood of a car.

You know it’s All New Wolverine when Gabby is, chin in hand, contemplating Laura’s splayed and horrifically broken fingers.

There’s a charming ur-Marvel quality to the conceit of the body switch as Laura and Gwen try and largely fail to adapt to the bodies they’ve found themselves in. The cis male puberty metaphor implicit in Peter Parker gaining his powers is the most naked example of how body horror is a central theme of the Marvel Universe. It spans from Tony Stark having to invent the arc reactor to save himself from his own body to Kamala Khan’s growth spurts as superpower, a motif that Taylor and Marcio Takara take full advantage of as Gwen and Laura are forced to get to know each other in order to get to know themselves so that they can get back to themselves.

Beneath that clever motif and the visceral thrill of seeing Marvel’s two hottest female heroes awkwardly team up, it’s readily apparent that Taylor and Takara are entranced by both the idea of getting to play with someone else’s toys and trying to tell a legitimate Wolverine story.

Probably the cleverest and one of the best loved bits of Spider-Gwen’s rise to prominence has been Jason Latour and Robbi Rodriguez using Spider-Ham as a projection of Gwen’s subconscious the same way Grant Morrison deployed Bat Mite in Batman R.I.P. Taylor and Takara take full advantage of that idea by introducing Wolverhampton, an adamantium clawed variation on the theme.

On the more sober side of things, they keep the story well within the wider narrative they’ve been weaving since the debut issue by revealing that the body swap was the result of a failed experiment by a young woman trying to teleport Logan to an alternate universe in revenge for killing her uncle.

The sins of the father have weighed heavily on the title since Logan first appeared in a flashback to their time together in X-Force and the apartment he left her has become the focus to the shadow he casts on the narrative, most notably in it being the target that the Hornet’s niece chose to exact her revenge and the place that Old Man Logan raised her in his timeline. It’s an important bit of verisimilitude that keeps the series focused and allows it the freedom to move beyond the immediate concerns of the moment while remaining thematically relevant to the central ideas it pursues.

Takara is truly the sprinkles atop the frosting on the cake, pumping Taylor’s dark humor and barely concealed pathos full of whimsy with the larger than life emotion he imbues his figures with. It’s Takara that sells the humor in Gwen-as-Laura holding up her mangled fingers for Gabby’s inspection or the heartbreaking innocence of the latter making a domino mask for Jonathan the Actual Wolverine to protect his identity.

What defines All New Wolverine as the most emotionally satisfying superhero comic on the stands is its ability to maintain a heart, soul, and sense of humor in the midst of the darkest depths of the human condition. While Taylor’s utterly unique ability to use humor to break the tension without descending into cold nihilism has been a key contributing factor, it’s been the artists, from Lopez and Navarrot through to Takara who have embodied that spirit to its furthest extent and this issue is no exception.

The bright and pleasing figures that Takara provides, paired with the warm, deeply saturated colors provided by Mat Lopes elevate the pitch black humor of Gwen accidentally stabbing herself in the face off panel into a piece of innocent physical comedy. The ethos of using Gabby’s youthful naivety as a means of injecting an innocent and fragile humanity into what is otherwise a brutally violent reality suffuses the entire issue, most apparent in Takara’s idiosyncratic take on Jonathan, but it’s a spirit he consciously employs throughout the issue, particularly as Laura, trapped in Gwen’s body, struggles to adapt to her newfound strength, destroying her drum kit and shattering the windows of Captain Stacy’s car in the process.

All New Wolverine’s first annual is a much needed diversion in the the midst of what may very well be Marvel’s darkest and cruelest company wide event, but it also marks an important milestone for its marquee female lead and serves as a reminder that its creative team are the best at what the do, and what they do is, in fact, very pretty.