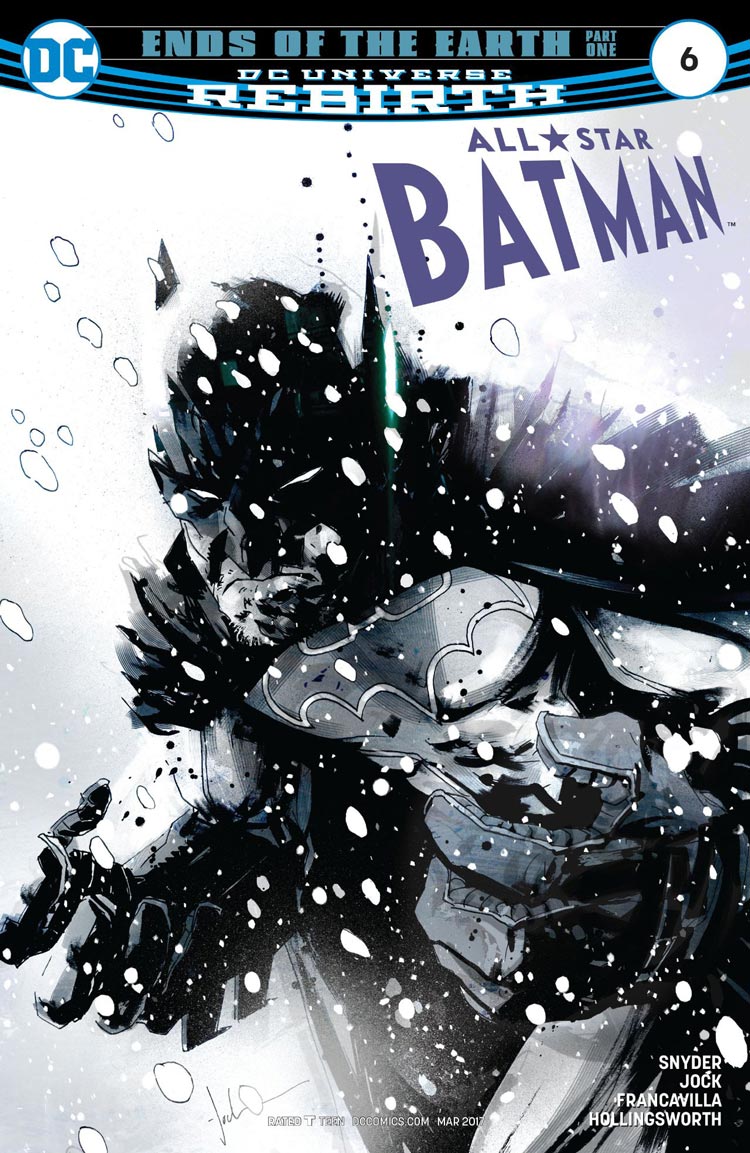 After the exciting conclusion of the “MY OWN WORST ENEMY” storyline, it appears evident that Snyder’s ability to craft new ways of showcasing classic bat-rogues continues to both entertain and impress in equal measure. Having tackled Two-Face, Snyder’s next arc, “ENDS OF THE EARTH,” brings Batman into conflict with Mr. Freeze in one of the best Freeze stories ever released.

I will admit openly and strongly that, as a Bat-fan, the work done by Batman: The Animated Series has and remains the strongest barometer for how to define a ‘great’ Mr. Freeze story. While Freeze doesn’t always need to be misunderstood, at the very least his broken humanity and his misplaced desires for companionship should be at the forefront of a good story in which he is the star. Seldom is this the case since, for the most part, Freeze often becomes a background villain or the means to push another villain’s plot along.

Snyder’s work with Freeze at the start of “ENDS OF THE EARTH, Part I” does a fantastic job at two things. First, Snyder is clearly open to shaking up the narrative stylings of the All-Star issues since from the start the narrative prose is far, far more dense than traditional comics that get released. Elements read as excerpts from a novel or a formal script, with much emphasis being paid to internal thoughts and motivations. This seems as far removed from the nature of the previous five issues of All-Star as you can get, but it is heightened further by the lack of formal speech bubbles.

Jock’s art (which I will have plenty to say about in a moment) do as much to drive the narrative as the prose itself. Without the traditional word-balloon trails to connect WORDS to SPEAKERS, the art and the prose both become more important. For example, when Mr. Freeze reveals himself, his words feel as much a part of Jock’s artistic page work as they do ‘narrative.’ This, for me, forced me to re-read the issue twice, once to get the story and the next to simply read the actions of the characters themselves.

Batman’s venture into the arctic while hunting for Freeze is already a good hook for a story, but the full revelation of “what” Freeze is making/uncovering beneath the ice makes me think of the UK TV series Fortitude. Snyder connects Mr. Freeze to the concept of death and global catastrophe, something that works well with his character’s icy/unfeeling nature, but the selling point in making everything click, as mentioned before, is Jock.

Hollingsworth’s colors are very simple, which works given the dark and icy setting, and they’re used to great impact alongside his lean and water-color like designs for skin tones and materials. Jock’s use of mixed textures and often sketch-like line work makes every moment feel dreamlike and surreal. This is even more awesome since, at one point, there is a dream sequence!

Given the watery and icy texture the story needs, Jock’s fantastic art paired with Hollingsworth’s colors makes this issue visually dynamic and it accents a fantastic start to what is already a great plot. While there is a Part II foreshadowed at the books conclusion, “ENDS OF THE EART, Part I” could serve as a great Batman story on its own.

While Mr. Freeze may forever remain, pardon the pun, frozen between the stoic tones of the late Michael Ansara and the over-the-top insanity of Schwarzenegger’s version of the character for some, Snyder is doing great work in building a new Victor. This Mr. Freeze is haunting, broke, but ultimately still human. If that, to you, makes his intentions in this story more or less haunting, well, that is for you to discover for yourself.

Also: of course Victor would find that Robert Frost poem fascinating. Of course he would!