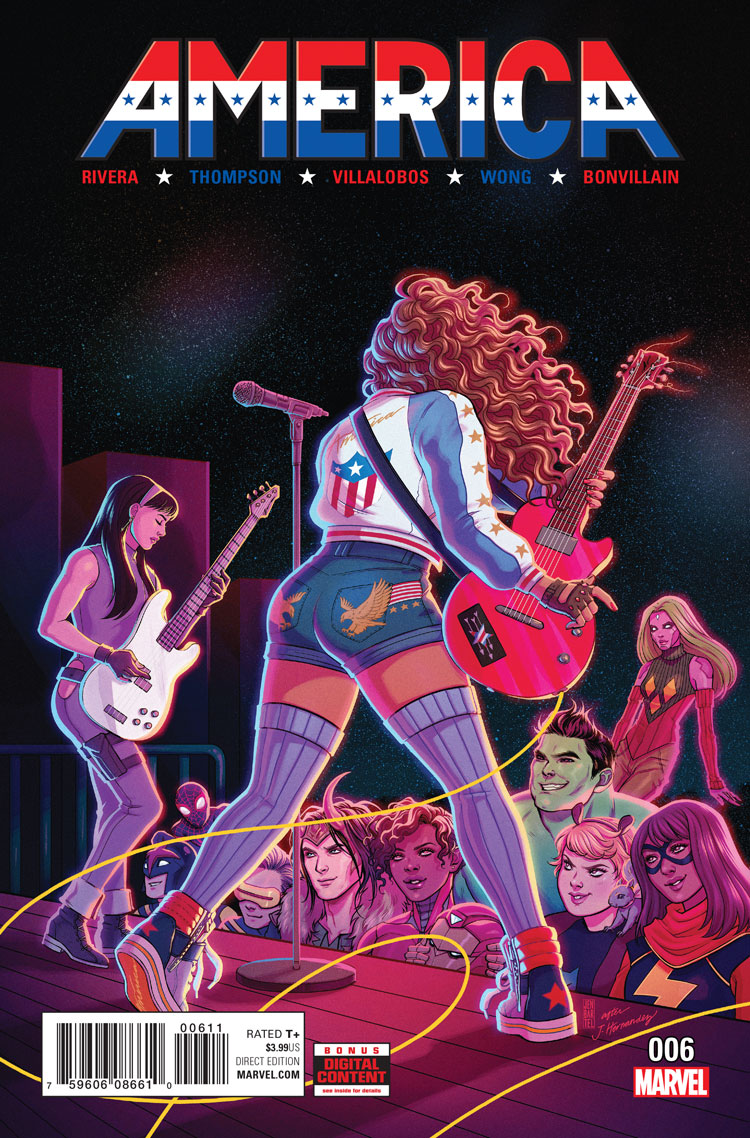 America can throw a punch, but there really are times she doesn’t expect to. As she looks at a face from her past, she quickly has to balance a number of problems all at once. If nothing else, those who love her are always her Ride or Survive, and in true America fashion, she works out a solution that is equal parts fist and love.

This issue of America puts a few things in context, from America’s family history to her evolving feelings as she has grown to who she is. Characters’ interactions all revolve around her and describe the differing nature of those within our protagonist’s life. I like seeing the varied sides of America and what they mean for her, whether she is privy to them or not. Having this kind of nuance provides so many new ways of understanding her, keeping integral ideas at the fore while slowly altering how they fit within her overall story.

Gabby Rivera and Kelly Thompson tag team a couple of all-stars in every round. I find it interesting that America’s personality is always front and center, but in a different manner when she’s with Kate. Cultural markers in speech and dialog are less common than in preceding issues, though this does not take away from the story being told. Rivera and Thompson work pace for pace in crafting the story and help to make sense of the BFF’s long history. The fact that most of the characters in play are women highlights why friendships and romantic connections are both important as part of the story. This writing duo capitalizes on this reality by creating some truly stellar moments which reach the bonds familial, platonic, and romantic.

Ramon Villalobos is well suited to the ring, and Walden Wong helps cheer on the major fighters in this story. The opening page has a prominent wow-factor that sets the pace for the rest of the story. Villalobos has a penchant for gruff details which are great for scenes with fighting and erratic emotionality. Many scenes are wrought with tension and aggression, allowing for these talents to be on full display with Wong in tow.

Tamra Bonvillain is a master of emotional tones in color. Such a skill is most apparent in the desert skyline, whether daytime or night. Scenes within the ring have an effect that touches on the contrast between the overt struggle between America and Magdalena, removing atmospheric use of color to solely focus on the characters and those who begin to more directly interact with them. Bonvillain’s portrayal of these different environments allows for them to evoke different feelings, setting up a structure which facilitates the progression of the story and its relevant emotions.

America is a comic which handles different aspects of comics, culture, and life in a way that is deeply moving. Stakes are always high, but not in a way that would drive up your blood pressure. Between the writing and art, everything feels important and is a grand testament to layered narratives which revolve around fictional characters. With a firm lead toward future stories, this series will continue to address cultural narratives while embracing the fantastic parts of superhero comics.