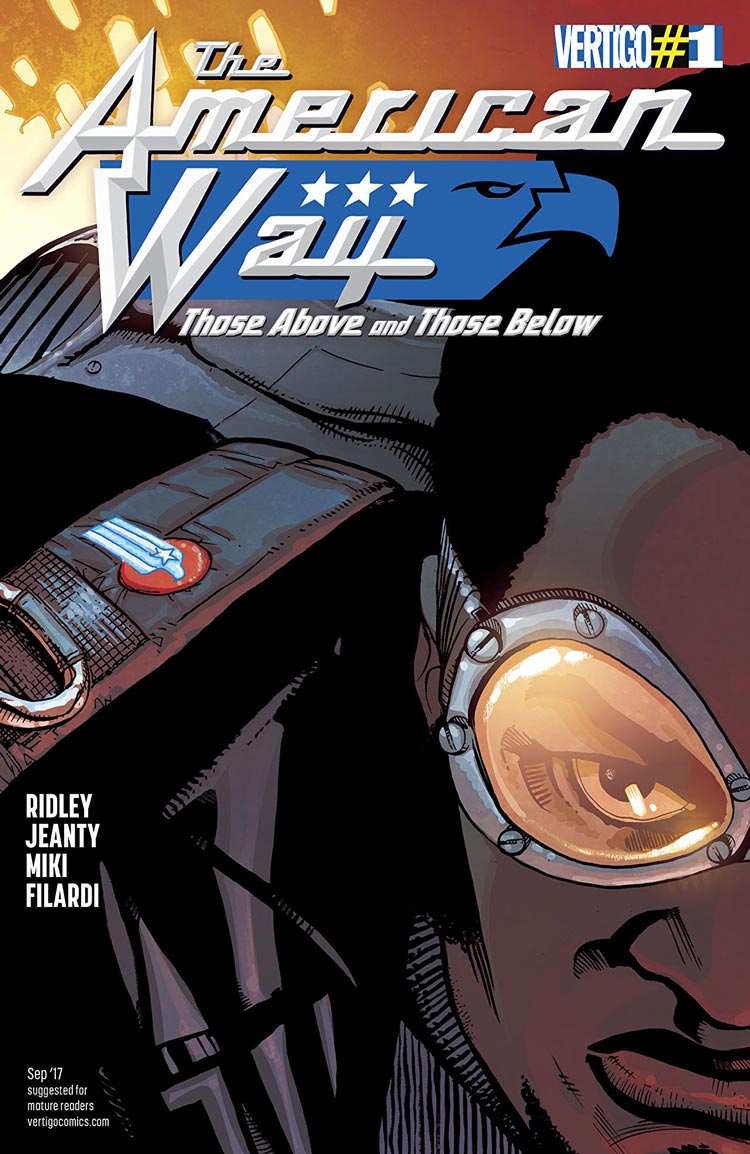 AMERICAN WAY: THOSE ABOVE AND THOSE BELOW #1
Written by John Ridley
Art by Georges Jeanty, Danny Miki, Nick Filardi, and Travis Lanham
Published by DC Comics/Vertigo
Release Date: July 12, 2017

Symbols of hope in a time of change.

Baltimore, Maryland. Jackson, Mississippi. Oakland, California. Each of these places is dealing with a new epoch in American history in their own way, and those who are imbued with superhuman abilities are the impetus for change. Missy, Jason, and Amber have their own approaches to the society, and each are called in their own way to balance existential issues with the needs of those around them.

Very rarely do American comics — particularly from a major publisher — manage to adequately tackle real-life politics in a super world and address their intricacies. American Way: Those Above and Those Below offers a grim, disheartening, but starkly real take on racial tensions and the American government, exposing the difficult place of black heroes and the often personal fallout that accompanies a desire for change.

Even with its own particular context, that heroes were once used by the government to shore up hope in an attempt to placate the public, this comic is a stellar examination of the consequences of people’s actions and how they very directly correspond to ones we have seen throughout history.

John Ridley aptly delves into the complicated issues regarding racial disparities and violence through the story of Jason Fisher. Jason’s motivations lean toward peace and nonviolence, with his abhorrence for killing at the forefront of his character. He tries his best to help Baltimore and regrets having to kill people in the past, though this puts him at odds with a community that wants to rid itself of a drug problem and the interference of the police.

Ridley pulls together a number of differing philosophies that involve helping communities of color, including the role of violence in social progress during the 20th century. Every one of Jason’s choices is difficult, particularly at the conclusion of the comic, and through him we get to see the nuances of black bodies with superpowers and how that does not protect them from racism at the systemic or individual level.

Missy’s story is vastly different, leaving me curious what Ridley plans to do with her. Ridley casts her as a woman who is more bothered by the conflict of becoming a symbol again rather than Mississippi’s blatant racism. She seems to represent many white people today, who see “heritage, not hatred,” as anything other than a white supremacist rallying call, and who see their world as it “is” and progressivism as the sign of cultural turbulence. With her weighing the decision of taking up the political realm as a beacon for white southerners, she represents hope in a very different way than Jason does, one that assuages the fears of white and other privileged people but in a manner which not so subtly continues generations of oppressive systems.

Ridley’s characterization of Missy almost makes me uncomfortable, and in this book that is a mark of an appropriately provocative character. This feeling comes not just from her focus on herself and activity within racist Jackson, but also the reflection of many people in our world, on more than just the axis of race, who are able to live with conservative politics as a function of their privilege because it does not affect them.

Amber, on the other hand, is far more radical than the people she shares this comic with. She uses her powers as a show of force to disrupt the system, wishing to force America to a new and better place. Underneath her efforts at progression lies substance abuse which is revealed to be tampering with her powers.

With this character, Ridley uncovers the lengthy and detailed efforts which correspond with radicalism, while also touching upon the sometimes heavy toll that political action can have on progressive individuals. When considering the glimpse at her past, Ridley has written a character who has to simultaneously manage an agenda and her own trauma, reminding us that political action does not occur in a vacuum, especially on the personal level.

It’s hard to fully digest this story without putting a laser focus on each of the characters and their contexts. In one issue, Ridley has laid the groundwork for a story that has an immense punch out the gate and that will hopefully have a lasting impact. With multiple characters in one story, it’s hard to fully flesh everyone out, but they all have starting paths that will evidently lead somewhere, tying their stories into something raw and powerful.

I appreciate that Ridley is deliberate about characterization and plot, leaving the story feeling as though it has genuine promise rather than missing pieces. Each of the main characters’ stories are spaced in a way that doesn’t detract from the flow or pace of the story. Their vignettes all have different tones, but still provide evocative material that looks at their place in the world and their accompanying problems. While their settings and stories are disparate, there are small ties throughout the issue that weave them together, slowly crafting a cohesive and global context for the entire story.

Georges Jeanty’s pencils create the visceral window through which we see the three primary locales within the comic. Every building, every body, and every expression is laid out with such detail that they all feel real and palpable. I may not have lived through the 70s, but Jeanty’s art reminds me of the family photos in my grandmother’s home, particularly of black men with afros and side chops and women with rollers in their hair.

Jeanty deftly depicts the differing aesthetics of people during this time in the country, honoring the fact that they likely would not all dress the same, especially for their chosen activities. Each setting is drawn with the same diligence, so that Baltimore looks like an urban landscape in the throes of its own issues while Jackson appears like the idyllic setting that belies harmful beliefs and the reality of poverty.

Danny Miki’s talent is well suited to the heaviness of the story. Miki uses a density that fits with the comic’s emotional and visual roughness. Fight scenes have a lot of tiny details that are more fleshed out with inks, while there are some scenes that draw attention either to characters or the objects around them.

For instance, Amber is shown in full clarity flying away after bombing a building, burning police cars in a smoky haze below her. Yet, in another scene a farmhouse has much more presence compared to the characters in front of it, seemingly playing on the semblance of the ordinary within Missy’s life in stark contrast to her conflict or the world outside her.

Nick Filardi imbues a different realism through colors. Baltimore is darker, shaded with blues and blacks while Jackson is much brighter with pastels and Oakland is light and structured with grays and areas of green. Filardi helps the story maintain its realism with color schemes that fit the urban, exurban, and rural settings that serve as the visual framework for the story.

This technique ensures that the story is grounded in a reflection of things around us, even if superpowers are involved. Filardi’s skills are helpful in these kinds of comics, reducing the barrier between the reader’s world and the world depicted on the page, allowing each message and narrative to fully emerge in a manner which is engaging.

For a glaring look at 1972’s politics, and for an unsettling resemblance to a present day America, read American Way: Those Above and Those Below #1. This kind of story is vital in examining social issues and the reality that they are never neatly packed or solved. A tale of super-humans amidst social and political strife is not something to be taken lightly, and the creative team for the series has immediately shown that they take every level of care and dedication in expanding this narrative.

Make no mistake: this story is not lighthearted and it doesn’t need to be, as it is the start of something that dares to explore saddening realities but so far without using common notes of dehumanization, exploitative oppression, or simply lack of awareness. This new chapter for American Way is going to be challenging, but also shows why difficult stories can be worth it when done with consideration for others.