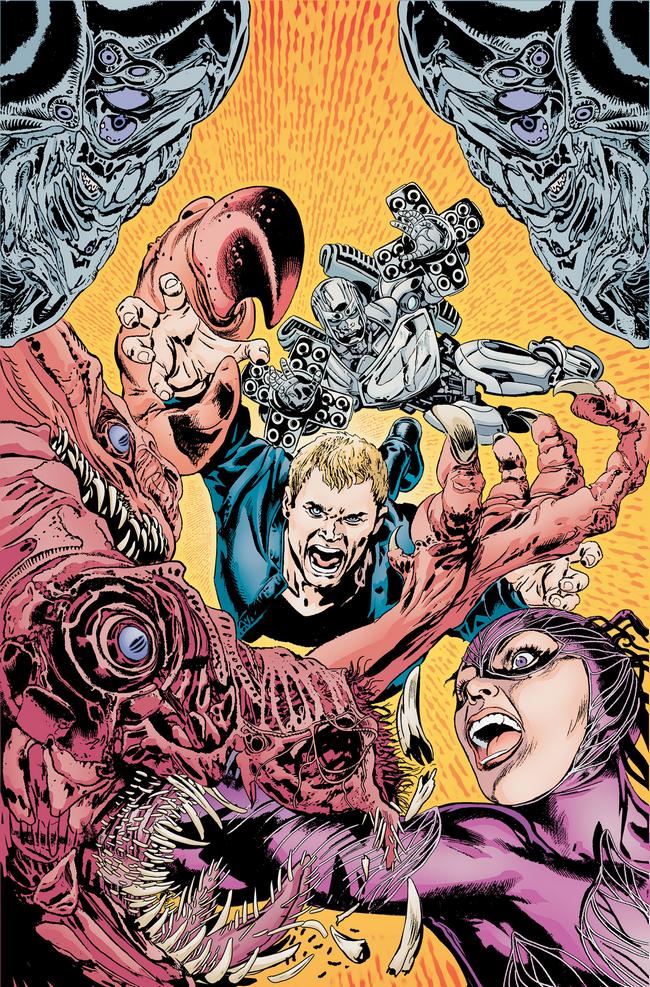 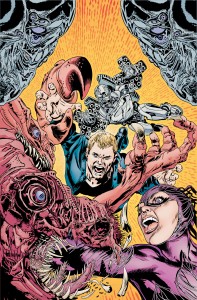 As much as I’ve loved Jeff Lemire’s take on Animal Man, I have to admit that I’m looking forward to the end of the current Rotworld storyline. It was a bold and ambitious idea to throw Buddy Baker a year into a future where Anton Arcane and the rot have taken advantage of his absence (and that of Swamp Thing) to reshape the world into a land of walking death. I’m glad that Lemire (and Scott Snyder) did it, but it’s becoming apparent that the time shift creates as many structural challenges as opportunities for the story Lemire wants to tell.

Leaping forward a year has allowed Animal Man to create an entirely new month-to-month status quo, which both demonstrates the nature and power of the threat posed by Anton Arcane and the rot, and creates an ongoing mystery to be doled out bit by bit. We may know that the rot has taken over the world, but we don’t know the details of how exactly it happened, or the ultimate fate of the family Baker left behind.

But there’s a trade-off to creating a pocket universe in one corner of a larger ongoing continuity. It’s fun to see what the rot has done to the heroes it defeated, and for John Constantine, Buddy Baker, and their few remaining allies to be able to fight as if they’re really in the middle of a war, but it’s hard as a reader to ignore the fact that most of what we’re seeing is going to end up being undone. As you’d expect, a world controlled by the rot is a desperate, bloody place, but when Rotworld is over, most of the characters we’re following won’t have any idea that anything happened at all.1

In effect, it actually ends up being too easy to forget that not everyone is safe, that, in fact, Buddy Baker’s daughter, son, wife, and mother-in-law — the characters we’re ostensibly most attached to, and who don’t have any day-to-day impact beyond the pages of Animal Man — are in mortal peril. Maxine Baker, Buddy’s 4-year-old daughter and the true avatar of the red, is one of the best parts of Animal Man. She’s smart, selfish, excited by the powers she’s discovering, and fiercely protective of her family. I would buy a Maxine Baker solo title, and if I think about it, I’m petrified that she isn’t going to make it out alive.

I have a similar guilty ambivalence about the art. Steve Pugh’s work is strong — his Frankenstein looks great, and I love little touches like having Beast Boy run around in Monsieur Mallah’s beret and bandolier after the ape meets an untimely end — but it still feels like he’s operating in the world that Travel Foreman built. DC has done a great job in the past year maintaining a consistent visual style on individual titles even when guest artists fill in to keep things on schedule, but it’s been months since Foreman has done any work on Animal Man. The title would benefit if Pugh (or someone else) were allowed to bring a newer or more distinctive energy to a world whose weirdness is beginning to feel a bit familiar.

In fact, I’ve started to wonder if Rotworld wouldn’t have been more effective in a more linear telling where Buddy Baker actually disappears and we’re left to watch Maxine and the rest of the world slowly lose a war against the rot in real time. It would have been a bold move for a title less than a year old to put its main character’s child into the lead role, but Lemire’s built a supporting cast that could have handled it. It would have played hell with the larger DC continuity, but with Abby Arcane in a similar lead role in Swamp Thing it could have made for absolutely necessary reading in what were (and are) already two of the boldest, most gloriously weird titles in the New 52. And that sense of urgency and necessity are exactly what seem to be missing right now.

The world has ended, but don’t worry too much. It’ll be pretty much back to normal in a few months.

1. Of course, if this were not the case, there’s no way that DC would have given Lemire such a free hand using (and killing) characters from other titles.