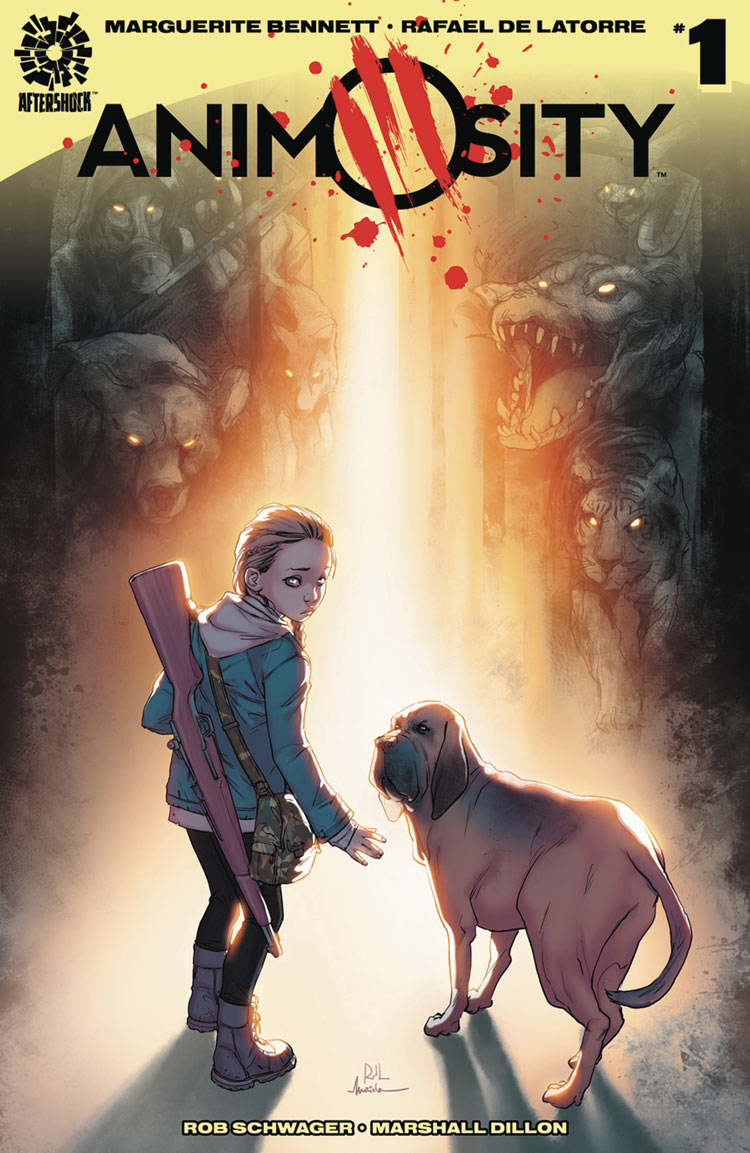 What if, all of a sudden, every animal — everywhere — could suddenly think and speak just like a human? We treat animals so well, there couldn’t possibly be any problem with that, right? I mean, why would they hold a grudge against us for … eating them, wearing them, caging them, or killing them for sport? Sure. We’re good.

When I was a little kid, my grandparents — in an attempt to give us something wholesome to watch, I imagine — would put on all of these movies about extraordinary pets. The Incredible Journey, Lassie, even Old Yeller — they all featured these incredibly loyal versions of man’s best friends. Who wouldn’t want a dog after watching one walk thousands of miles just to get home to be by your side?

So, yeah. Thanks, Marguerite, for destroying my childhood dreams.

Kidding, obviously. But there is something deeply disturbing about the concept behind Animosity that strikes at the heart of our love of animals — particularly those we keep as pets — and our feeling of security as we walk in the world.

I suppose I could have seen it coming with the advent of We3 by Grant Morrison and Frank Quitely, who took The Incredible Journey and blended it in a mixer with The Terminator (to my ever-lasting glee). But what Bennett and de Latorre are doing with Animosity is far more insidious actually. There’s no secret lab experimenting on our pets, transforming them into a force to make the Russians or terrorist threats knock knees.

No. An act of God — miracle or curse — that’s like the dirty bomb to We3’s automatic weapon. This spontaneous intelligence, and the anger that comes almost instantly with it, is multi-dimensional, pervasive, and focused in only one direction: outward.

Think about that for a second. How many animals — microscopic to gargantuan — are you surrounded by right this second?

The genius to Animosity too is that Bennett balances that sheer terror with the absolute heartstring tugging wonderment of Sandor’s (the hound dog) love for Jesse (a girl). Amid a flock of ruthless anger, infestations of murderous rage, and an inexplicable appearance of a bloodthirsty tiger in the middle of Manhattan, there is this one animal who, for his very first words, says, “I love you.”

Let’s not kid ourselves. There aren’t that many humans who would have uttered that before all else.

De Latorre sets up the series alongside colorist Rob Schwager, giving us a beautiful range of emotion from animals without resorting to cartoonishness. No, far from it, as each antagonist is rendered in realistic feel, and yet still have this sense of individualism about them. Easy to do in a tiger after so many Disney productions tucked carefully under the audience’s collective belt. Less easy to do with a mouse eating its baby or two chickens deciding to do away with the rooster that raped them.

And the pandas committing murder-suicide may have pushed me over the edge, but that’s a real testament to the artists’ nearly immediate ability to make me project personality into these creatures, with only a few words of dialogue from Bennett to ease the way.

Truly, I may regret jumping onto this series eventually, if only because it will lead me to side-eye my cats and that squirrel who prances so casually out of my way on my walk to work. But it’s probably worth it to experience the complete horror and joy — and the joy of horror — from this new Bennett-de Latorre joint. In the meantime, however, I may keep my windows shut and that food bowl extra filled. You never know.