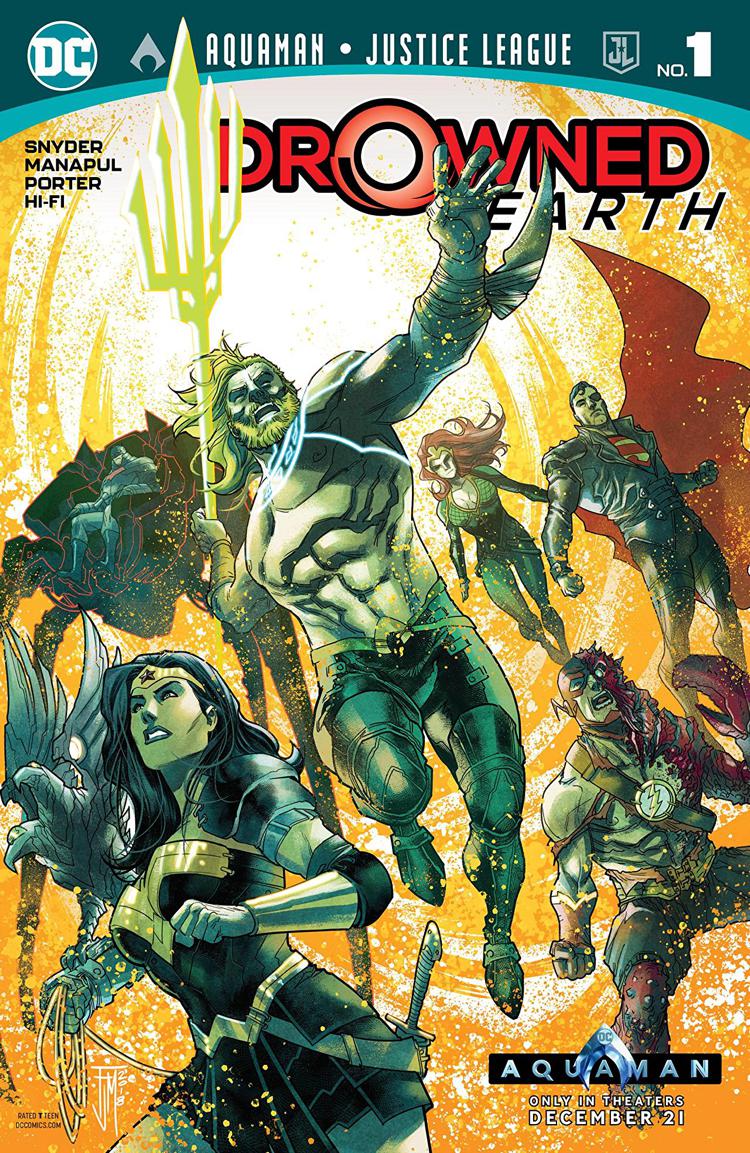 Packed full of action and adventure Aquaman/Justice League: Drowned Earth #1 is an epic finale and grand Shakespearean tale of gods and heroes, coming to terms with your history, and sacrifice. Scott Snyder masterfully crafts a thrilling adventure that’s only elevated by Francis Manapul and Howard Porter’s art.

Snyder’s story centers on Arthur coming to terms with the truth about the history of Atlantis while trying to regain his powers in an attempt to save the entire world from drowning and becoming crustaceous sea creatures at the hands of the Ocean Lords. The issue features Aquaman and Wonder Woman coming to the rescue of the rest of the Justice League and arriving with a solution to finally right the wrongs of the past.

Aquaman/Justice League: Drowned Earth #1 further proves that Scott Snyder has a firm grasp on the characters of the Justice League as it displays his ability to perfectly right for each of them. However more than anything the issue displays his grasp of and love for Aquaman as he beautifully handles the former king of Atlantis growth. The entire Drowned Earth event has taken Arthur on a journey of discovery and growth that honestly leaves the character in a place that I’m extremely interested in seeing explored in the future. Snyder does a fantastic job of making the story feel grand and mythical just like the myths many of us have grown up with.

Francis Manapul and Howard Porter’s beautifully vibrant and exuberant art perfectly fit the issue. With the help of Hi-Fi, Manapul and Porter produce art so beautiful and full of color that it can only be compared to the vast beauty of the depths of the ocean. One of the best pages in the entire issue comes about midway through when Mera shares her vision of the future of aquatic planets with the world. Porter provides a very ethereal and Avatar-like quality to the page that elevates it provides my favorite sequence in the entire issue.

Overall Aquaman/Justice League: Drowned Earth #1 is a fantastic finale to an already fantastic event. The issue has masterfully crafted dramatic tension and does a fantastic job of juggling its large cast of characters and giving each of them their own moment to shine. The issue ends with quite a few plates in the air and I’m interested in seeing Snyder handle each of them sooner rather than later.