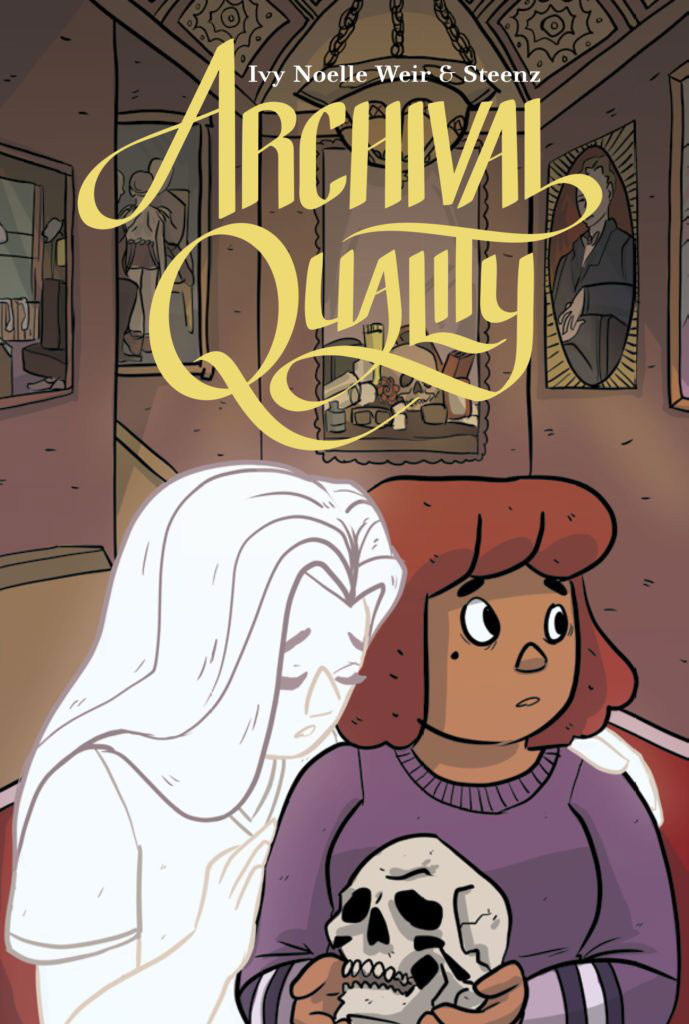 Archival Quality is an original graphic novel about main character Celeste “Cel” Ward, who loses her beloved library job after a mental breakdown and gets a new job as an archivist at the Logan Museum. Very soon into her tenure at the new job, she realizes that mysterious things are going on, including a ghost is trying to contact her for help in seeking a way to escape from the facility that toured her back when the museum used to be a sanitarium.

This book is in the tradition of stories in which a character deals with personal problems via an adventure during which they help another character. During her journey, Cel ends up not only helping the mysterious ghost girl but also finding new friends, and handling issues in her relationship with boyfriend Kyle, and getting to a better place herself.

This book really picks up and becomes interesting about a quarter of the way through the volume, after a mixed start with some heavy-handed foreshadowing. Once Cel actually starts her job and we see her experiences at the museum, the book kept me interested all the way through.

Weir and Steenz’s story is incredibly effective as horror; as I was reading this at night, I felt genuinely afraid as Cel was looking through the archives. Once chief curator Abayomi Abiola, head librarian Holly Park, and Gina (Holly’s girlfriend) get involved in the story, we get to see a lot more interaction between the characters and the themes of the story really start to come through.

The story includes themes of dealing with the wrongdoings of the past and of indirect complicity, in acknowledging the Logan Museum’s history as a sanitarium and the ways in which its history have been hidden unacknowledged. Revelations about several of the main cast show how people can become intimidated by people in power to not do the right thing, even when someone is asking for their help, and also show how one person choosing to do the right thing can influence others to have the courage to do so as well. As we continue to struggle to deal with the past of our own world, these themes feel especially relevant right now.

The writing and artwork both have their good and memorable moments, but also some moments that feel ineffective. Some sections of dialogue seem placed mostly to provide background information (something I’m understanding of and even interested in); other dialogue is genuinely moving and shows character development and growth. Some sections of artwork leave the reader unclear regarding what is being implied; other sections of artwork are genuinely effective in not only showing the characters’ emotions but at eliciting an emotional response from the reader.

The story leaves me wanting to read more, in two ways: By the end of the book, I had become in these characters and wanted to know more about them and their world, because they seemed intriguing; at the same time, I wish that the story had included more development of both the characters and the important themes that are introduced.

There were spots in which I think time lapses could have been replaced with some more scenes between the characters to further develop their motivations and friendships. There were several themes mentioned in the book that I think could have been really fascinatingly addressed if the story had been given more space to expand the world rather than going straight from beginning to end in a fairly linear fashion.

Archival Quality is worth reading for the topics addressed and the horror element. I do very much hope that Ivy Noelle Weir and Steenz get to tell more stories in this world that we only get a glimpse of in this volume.