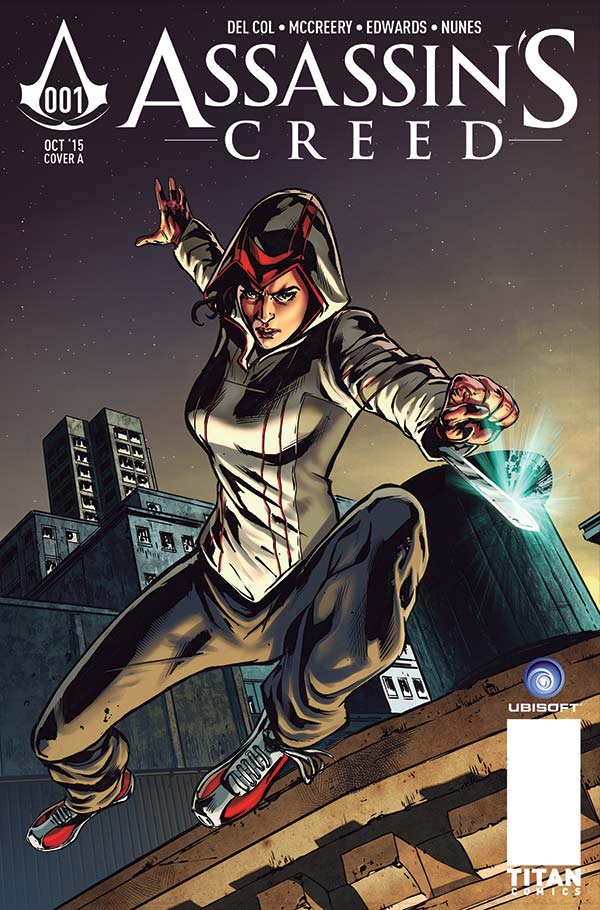 Gamer by night and passionate millennial bank clerk by day, Charlotte de la Cruz is looking for a new gig despite the who-you-know-not-what-you-know politics of the job search. After a disappointing interview and playing Robin Hood, she’s met by members of an underground group of urban myth, just before her life being threatened by a couple of suits. You know the story from here: Charlotte is tasked with protecting a vital piece of history by synching with her ancestor, throwing her into the middle of a clandestine battle to keep the wrong people from messing with history.

Assassin’s Creed definitely had an excellent start. When I found the main character was a woman of color, I was instantly on board. Charlotte is lively and Anthony Del Col and Conor McCreery make her loveable, just, and spunky. She’s one of my favorite kind of women in fiction, so she was refreshing, especially when she risked her job to help someone who needed it.

Neil Edwards and Ivan Nunes excel at creating dynamic art. The action sequences are great and there’s such an amazing sense of movement. A couple of panels were a bit awkward, but for the most part the art captures a sense of sudden intensity in Charlotte’s world.

I loved that this comic explored some complex issues. After a recession and growing costs of higher education, many millennials are in a period called emerging adulthood, where we essentially have to spend more time building our financial lives and sometimes live with parents, go to graduate school, etc. Charlotte is facing a very real issue that many people in our generation do, and it’s nice to see it fleshed out, including what it feels like to be passed up for a job in favor of someone an employer knows.

Charlotte’s passion for justice was a wonderful touch and one of the shining moments of this issue. She sticks to her guns and knows when the system is working against people who need help the most. Charlotte connecting her customer’s experience at the bank to her experience watching her uncle in the hospital was an important addition to this issue. Many people of color face similar circumstances for many reasons, especially as our family members end up in the hospital or when they die.

I did have one major point of contention: Charlotte’s ancestor. If the backdrop of her ancestry is the Salem Witch Trials, there’s no way her ancestor couldn’t have been a woman. I was hoping that aspect of the story would be more like the opening panels or Assassin’s Creed Liberation. For one, consider that for many people of color in America, having a White ancestor sometimes meant one of our family members was raped. While the history of Latinxs in America has some distinctions from my ancestry, African, I am well aware of what White men did to people who looked like us throughout history. So, these kinds of narratives have to be handled with care; they may often hold implicit narratives that reflect the oppression people of color have faced throughout history in America without fully addressing the impact of historical oppression.

Another issue I had was Charlotte essentially assuming the body of someone who did not value the lives of women, which is in direct opposition to Charlotte’s own values. We are often exposed to violent misogyny with little recourse in narratives, so I wasn’t sure how to feel about Charlotte essentially have to live as someone who is okay with violence against women. In a way, that almost felt like forcing someone who holds marginalized identities to be oppressive.

What I hope is that my issues with Assassin’s Creed #1 improve as the story unfolds. It is difficult to judge the entire story by one part of it, but the elements I didn’t like were pretty significant for me. However, Charlotte is still an amazing protagonist and I love her characterization. I believe she could pull off something significant within the story, so I have faith in her.