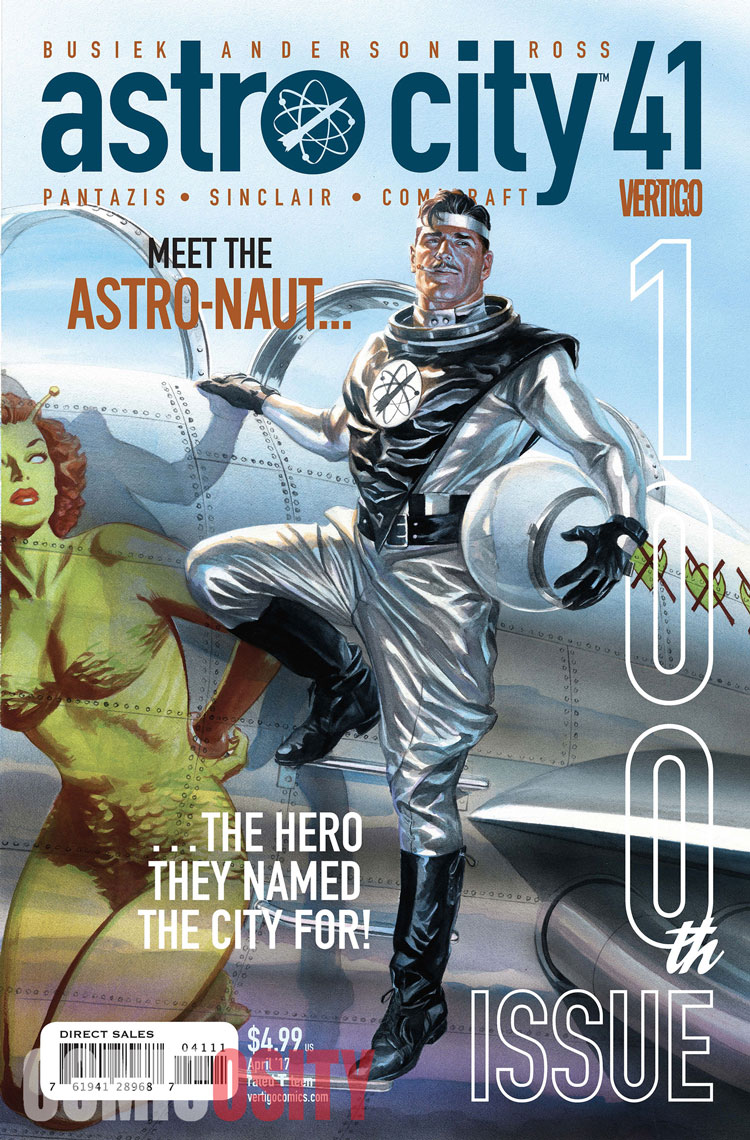 The 100th issue of Astro City is every bit the landmark it should be, oversized and telling the tale of the city’s namesake, The Astro-naut.

Busiek weaves a brilliant one shot tale here, as he often does with Astro City. This issue takes readers back to the days of 30s & 40s, before Astro City was known as such and before the explosion of heroes had started. Busiek introduces us to a Tony Stark of the time, Roy Virgil, a brilliant inventor who travels to worlds (the Multiverse?) and witnesses things never before seen by anyone in the world. He is sought after for his technology by the powers that be, but stoically retains the knowledge, distrustful of what power hungry men could do with what he knows. Busiek shows the fallout of his decision well, and his redemption in the eyes of the citizens of what is now known as Astro City. The oversized format of the issue gives Busiek & Anderson a lot of room to let this story build and breathe without restriction, and I will say this feels more fleshed out than some graphic novels I’ve read. I was immersed from the outset to the final page, and I have to say Busiek’s streak of fabulous Astro City issues continues.

Anderson’s pencil work is as steady as ever and he absolutely nails the look and feel of the 30s/40s. His pencil & inking style evoked a feeling of nostalgia for me and, like most issues of Astro City, this felt like coming home to an old friend. Anderson captured the swagger of Roy and how that playboy attitude started to shift as he explored more of the galaxy. As the action ramps up, colourists Peter Pantazis and Alex Sinclair really shine, making the action feel “big screen”. Their colour work enhances Anderson’s pencils very well, and the summation of their work is a unified set of visuals that tells this story well.

Astro City #41 is a landmark-worthy issue. Not many creator-owned comics have the longevity of Astro City, and what astounded me with this issue is how true to its roots this comic still is. Astro City is one of the most enjoyable comics you’ll find each month and this oversized issue is a great bang for your buck. You won’t be disappointed to learn how Astro City got its name, and I’m excited to see what Busiek, Anderson, Ross and the rest of the team have planned for the next 100 issues.