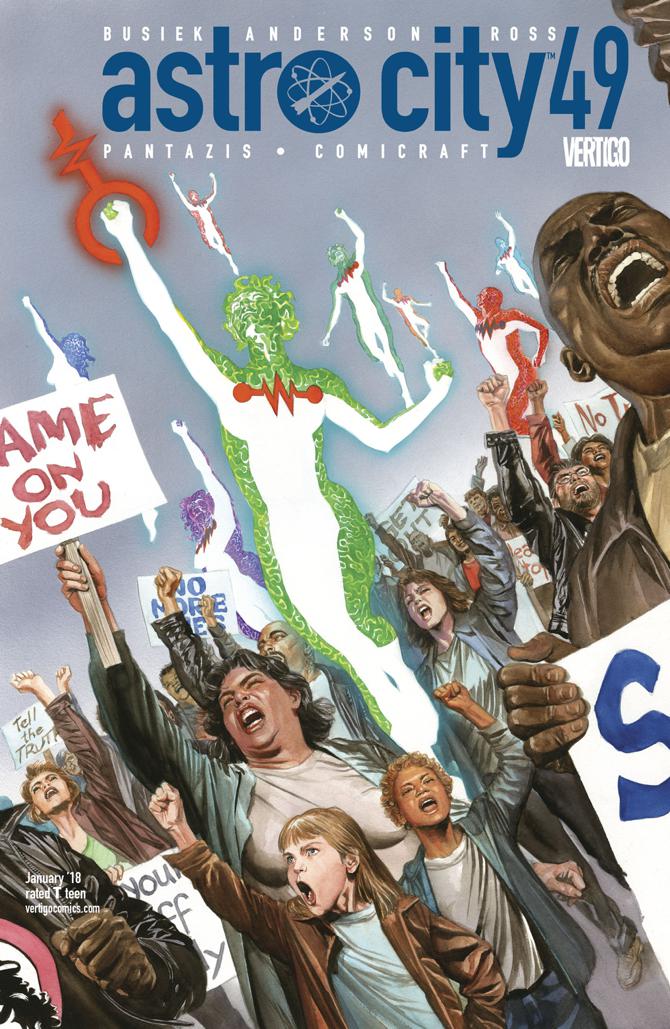 One of the wonderful things about Astro City is its nature as a predominantly stand-alone issue series, a rarity these days. The format has allowed the creators to build a rich and populous world while also allowing for innovation at every turn.

The familiar aspects of an Astro City are a riff on an existing Marvel or DC character, with a dash of a our world mixed in. This issue has a take on the Marvel character/concept Captain Universe placed in opposition with the current politically-charged world of protests and social conflict.

Science fiction is always at its best when it is telling a parable, and that is what we have here. An absentee father who crusades to save the world, and the daughter who seeks the truth in her own way.

Anderson is, as always, a consummate storyteller. Framing the moments as we are taken through a lifetime of pain and regret. When his art is allowed to breath, it is very strong.

Comicraft has the heavy lifting here as the narrative style of this issue has the art fighting for space with the text. The letterer keeps a good flow and works as best it can through pages that have a dozen or more narrative captions. Anderson at times seems to give up against the tide of words and put in a spot image instead of a full panel.

Pantazis’ best contribution is the color design of the Captain Universe stand-in Resistor. It is a simple and functional design that allows the inspiration to read quickly while also being distinct.

The political issues themselves are introduced and then discarded quite quickly. An alien refugee crisis and super-powered “Earthpride” agents (sporting Confederate flag capes, in case you had trouble working out the imagery), only last a couple of pages before we move on to the task at hand.

At times risking being a bit heavy-handed in its politics, this issue nonetheless pulls back from that brink to tell a more human story of leaving this world better than you found it.