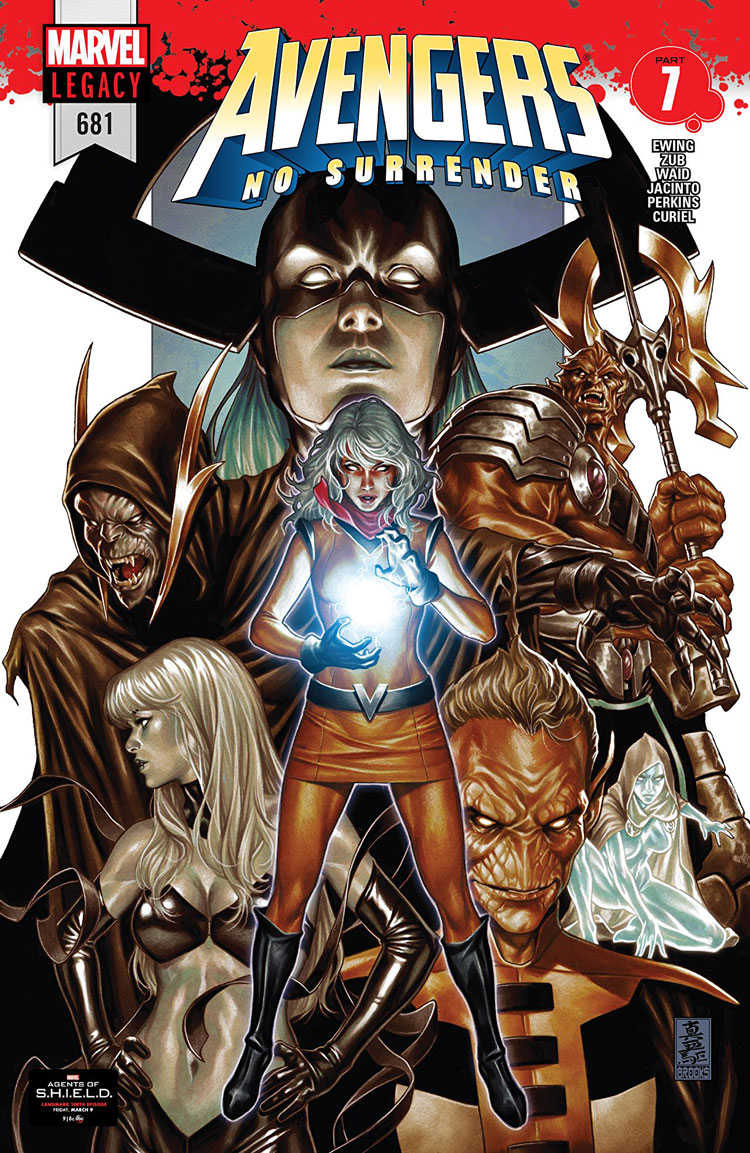 That’s how Avengers #681 ends, but this issue’s finale is less of a cliffhanger than previous chapters of “No Surrender”. But that’s not to say that this issue, written by the trio of Jim Zub, Al Ewing, and Mark Waid, lacks suspense or drama. It has plenty of both.

The Lethal Legion forerunner, General Glory (or, as we learn through his on admission “Glah-Ree”) takes the narrative lead for Avengers #681. The General concisely confirms the plot: Grandmaster has collected his team to battle the Challenger’s team and Earth is simply the game board. That adds a bit more chaos to the story, which is great for power displays, but not overly substantial for character development. Zub, Waid, and Ewing do peek into the mind of Roberto da Costa (Citizen V, although he’ll always be Sunspot to me) and General Glory gets a significant bit of history and personality.

Glory isn’t the only one to get some attention from the writers’ club, as Avengers #681 contains a four-page origin story for Voyager. It’s Silver Agey at its core, and gives readers yet another offering to accept for a new character being shoehorned into existence, especially as Vector takes the lead for panel appearances in this issue, nearly doubling the next closest Avenger’s time.

It all comes together and works for me, as I’m ready to buy Valerie Vector’s tale. Maybe that is partially due to David Curiel’s coloring for that segment, or maybe I’m just an easy mark. The coloring in that tale has a worn look to it, not unlike colored pencils on textured paper, which is beautiful when added to Kim Jacinto’s art.

As with the previous issue, Jacinto benefits from having lackluster settings appointed to his pages: nondescript New Mexico, Antarctica, and the Avengers Auxiliary Headquarters, all of which are only whatever Jacinto and Curiel choose to make them. Sometimes there’s a nice, panel-filling amount of detail, other times Curiel steps up with a wash, gradient, or starfield. When the Pyramoid is claimed, however, the art gets a little over-saturated, requiring the reader to decipher the exact occurrence and loss depicted.

Mike Perkins hops in to provide an assist, noticeably in the latter half of Avengers #681. His style, while sharp and detailed, doesn’t meld with Jacinto’s cleanly, so it is to the story’s benefit that the handoff coincides with a page turn. Curiel’s colors help balance the story between the two artists, while keeping the overall palette bold.

Cory Petit letter’s the tale to fitting specificity, even to the point of giving Glory and Voyager separate looking caption boxes, regardless of the tone or contents within. Like Curiel’s colors, Petit’s letter work helps keep visuals consistent throughout Avengers #681.

Overall, the seventh installment of “No Surrender” in Avengers #681 is another solid chapter in what is becoming a significant epic in Avengers history. This issue feels a bit like a transitional issue, but I cannot clearly see where that transition is headed. That mystery, that potential, intrigues me. The second-to-last page amplifies the epic nature of this story by bringing back a character in true Avengers fashion. Where this story goes from here is anyone’s guess, but I’ll definitely be reading.